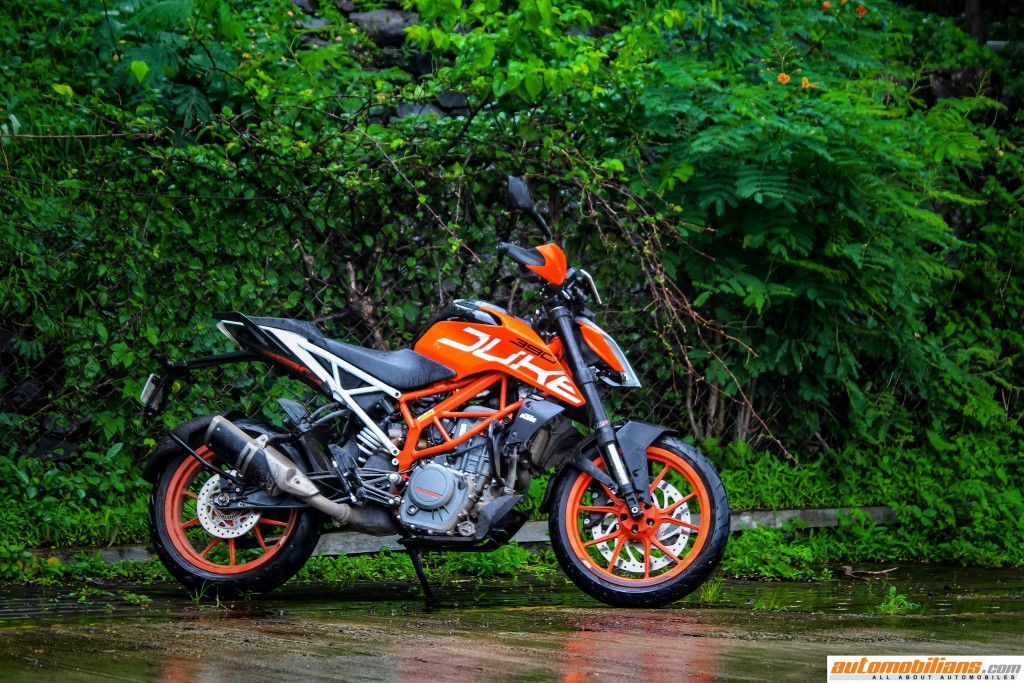 The KTM Duke 390 caught everyone’s attention when it debuted at the 2012 EICMA show in Milan, Italy. It then went on sale in India in 2013 and soon after it was launched in India, it became a very popular motorcycle among the petrolheads and became every rider’s choice for the performance it offered for the price tag which it came for. Now, for this year, the company has launched the new generation Duke 390 and it is a complete step up over the old model. It’s new on design, performance and also on the equipment. Read on below to know more about it.

Its Styling: The Duke 390’s design now has changed by leaps and bounds. The old Duke 390 looked muscular while the new 2017 Duke 390 looks sharper and aggressive and gets an aerodynamic design. The tank shrouds get an extended design and add more styling to its overall design. The new Duke 390 looks like a baby 1290 Super Duke though. It’s more orange than before, gets a steel tank of 13.5 liters and yes it also gets a completely new split LED headlight just like the 1290 Super Duke. As its shrouds are orange, its tank is black and the rear subframe and panels are painted in white. There are now new mirrors and they seem to have gone wider than before. The handguards on this bike are carried from the old Duke 390. There is new rear LED taillight that looks more like RC series’ taillight but looks much better than before. With all these things said, there is one major change made to its design and that is the addition of the side mounted exhausted, well that’s the courtesy of Euro 4 emission norms and the addition of the side mounted exhaust has increased the kerb weight of the bike by 9kg making go from 154kg to 163kg. With all the design cues taken from its elder sibling, the 1290 Super Duke, the new Duke 390 catches everybody’s attention quite easily as the bike looks very sharp and looks focused and aggressive as if it is ready to attack some prey just like some wild animal. 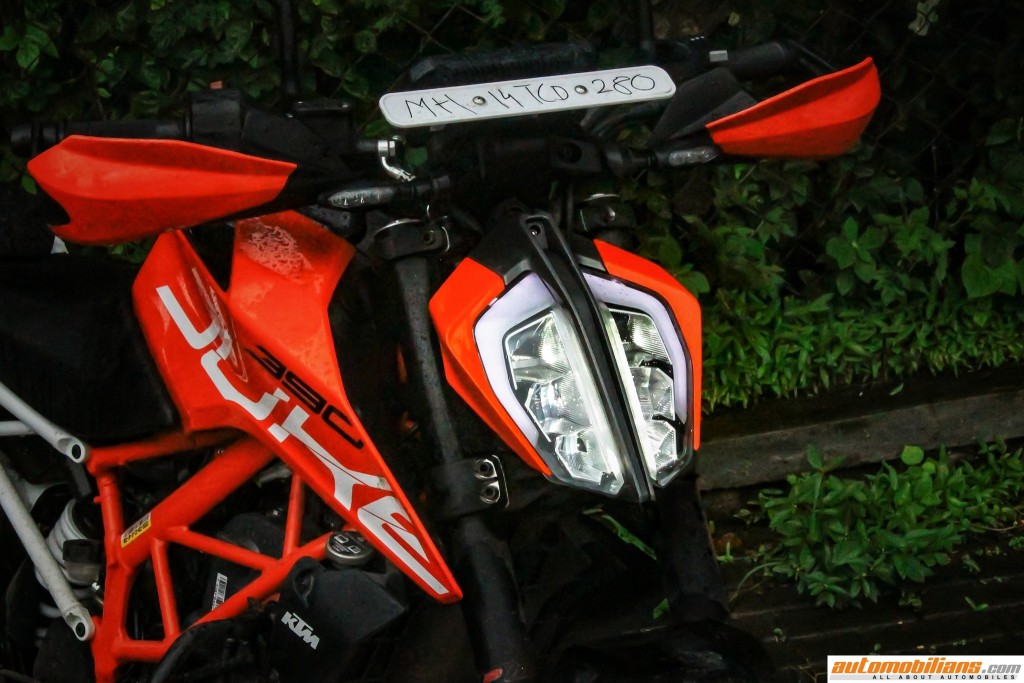 Its Switchgear and Instrument Cluster: The most fabulous addition made to this bike is the new 5-inch TFT instrument cluster. It’s like a cherry on the top of a cake. And it’s not just a black and white screen but a fully colorful display which shows all the necessary information in an uncluttered way. Usually, you get to see such displays on bigger capacity, and much costlier motorcycles but the 2017 KTM Duke 390 is the first motorcycle in the sub-500cc segment to feature it. It also features KTM My Ride connectivity through which you can connect your smartphone to the bike. And with that, you can access your contacts, control your phone calls and also manage your audio player. You can toggle these features and go through different information by using the switches on the left switchgear of the handlebar. During the day the display’s background light is white and during the night it changes its color to black (check out the GIF image below). 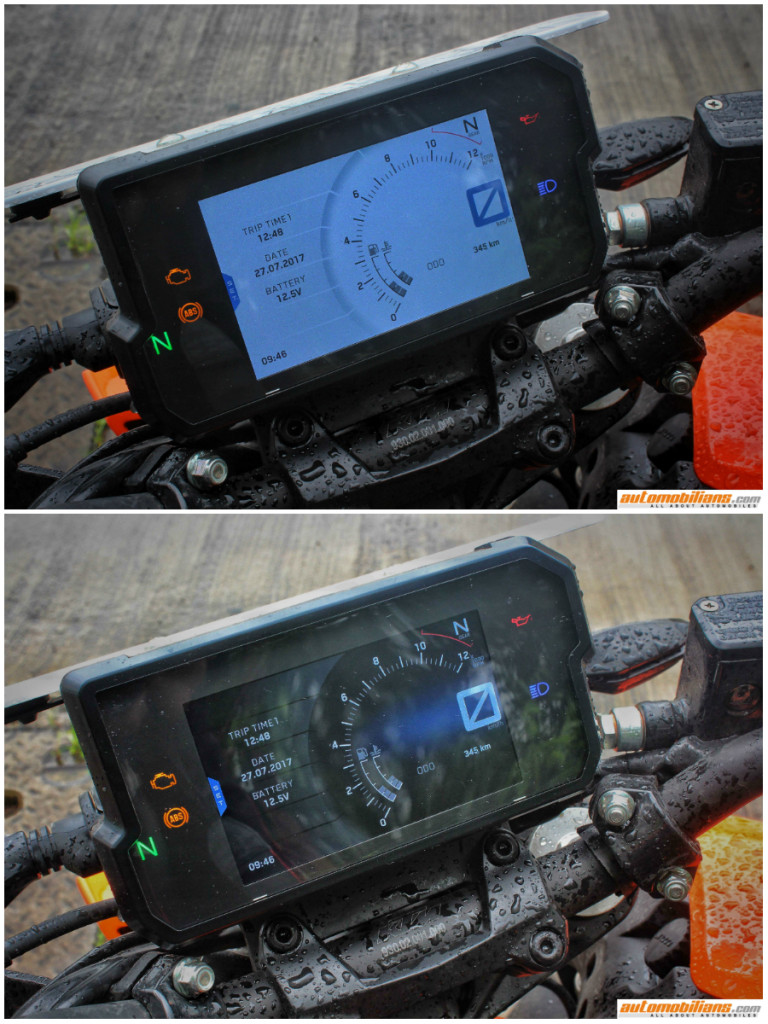 Its Ergonomics: The 2017 Duke 390 is built on a steel trellis frame and now has a bolt-on subframe, basically making it have a racier geometry than before and you a slightly have a more forward-biased riding position which eventually shifts more weight onto the front end. How has that happened? Well, that’s because of the tweaks made to the handlebar as now it is straight, a bit forward and slightly higher and also to the foot-pegs that are now a little higher and rear-set. The seat height is now at 830mm and the two-piece seat is new and very comfortable than before. It is very accommodating as it is wider and longer which makes this bike roomy and comfortable to move around during your short and long runs. Though the seat height is taller, it feels lower as the seat is narrower towards the tank that helps you in locking your knees against the beautifully designed tank shrouds which eventually help you to maneuver this bike more easily than before and also help you to remain flat-footed at a stop. 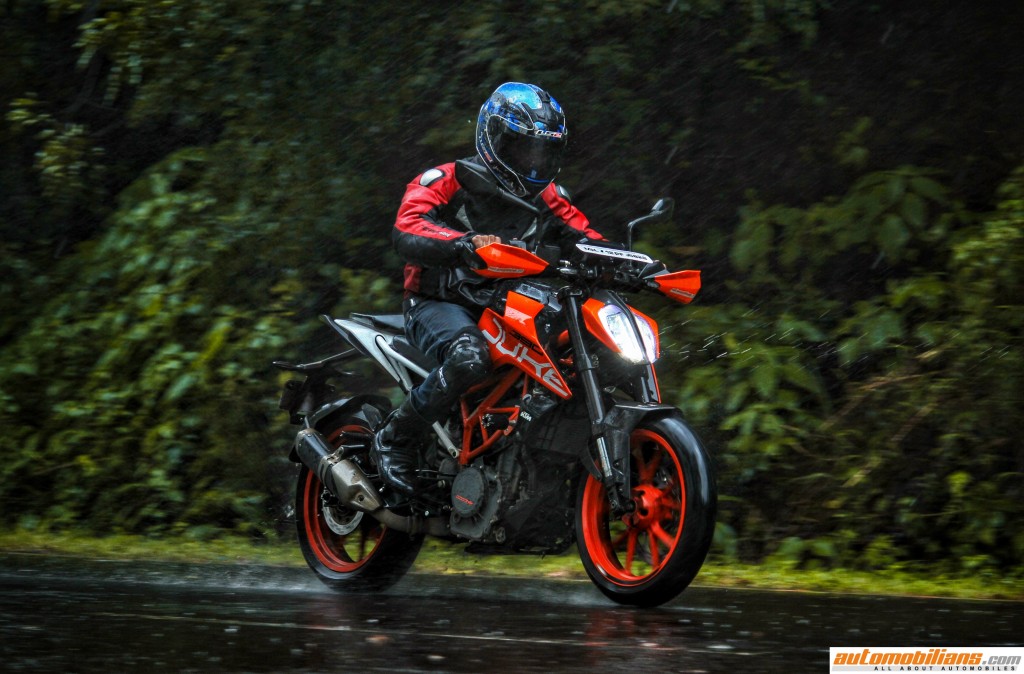 Its Engine and Performance: The 2017 KTM Duke 390 gets a Euro 4 compliant, 373.27cc single-cylinder engine. It churns the same 42.90 BHP of power at 9000 rpm but gets an increase in its torque output by 2 Nm making it a total of 37 Nm at 7000 rpm. And all of this power is sent to its rear wheel via a 6-speed transmission and a slipper clutch. With the new Euro 4 compliant engine, it now gets a ride-by-wire throttle system, and also a side-mounted exhaust which replaces the old underbelly exhaust. With the new exhaust, there’s a bigger airbox now which is also the reason behind the increase in the torque output. 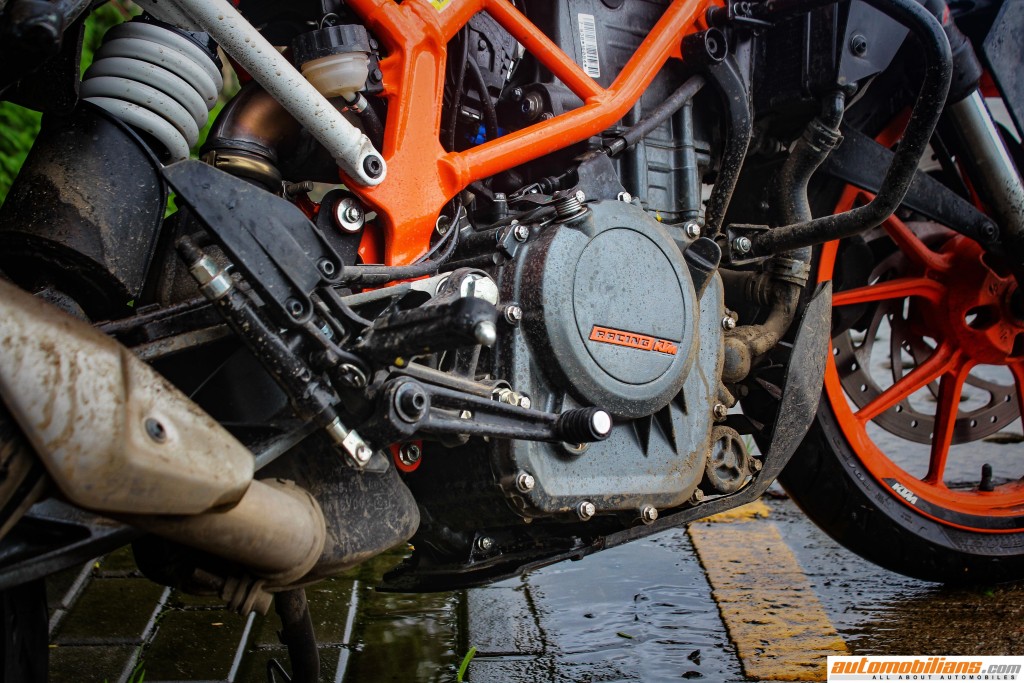 As far as its performance is concerned, the power delivery is very smooth and linear and has more grunt than before. It has an estimated top speed of 170 km/h and does the 0 to 100 km/h sprint in about 5.60 seconds to which we also believe that it might be true as according to our V-Box tests it did that sprint in 6 seconds that too in wet conditions. With such great performance, it also has a good fuel economy of 25 km/l (claimed) and now has a better range because of its bigger fuel tank of 13.5 liters instead of 11 liters. And yes, of course, the engine on this one does not dissipate much heat like the old one but the whiny sound of the radiator fan remains to be there. 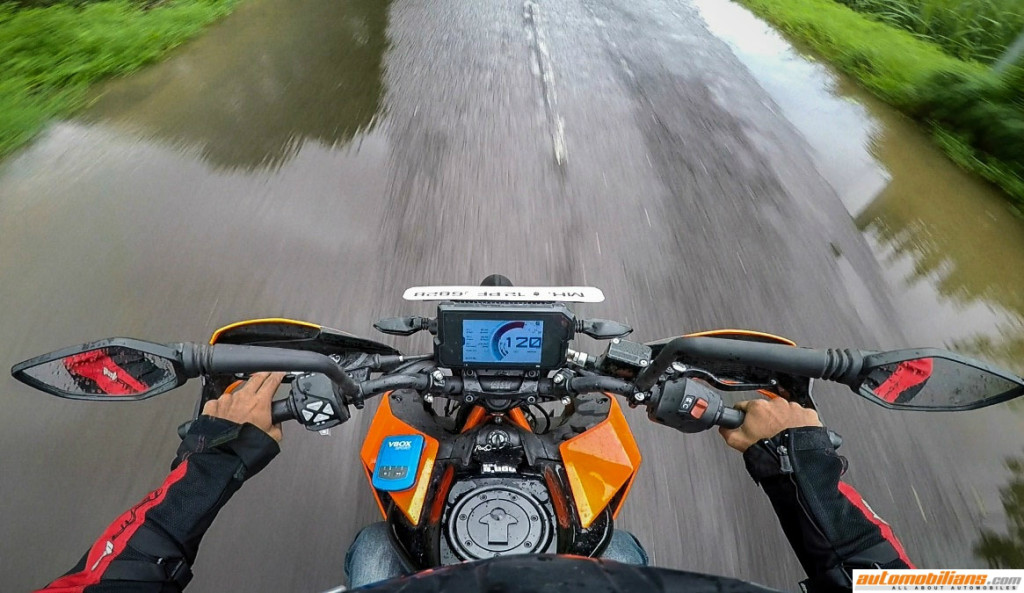 Its Riding Dynamics: The power delivery as said before is very linear and the ride-by-wire throttle system is so responsive and mannerly that you immediately feel the opening and closing of the throttle. Open the throttle at any point and you will be given the access to all of its power all the time. Though its weight has been increased, it still manages to scare the hell out of you just like the old Duke 390. Through traffic, it did seem to struggle a bit at lower revs but it’s a complete joy to ride it in the mid rev range i.e. between 4500 rpm to 8500 rpm. And if you want to have some more fun, open the throttle wide and in no time the tachometer’s needle will madly keep going all the way up till its redline, thanks to its short gear ratios and the slipper clutch which does its job very well during upshifts and hard downshifts. The dogleg levers now feature adjustment levels up to five positions. Set them right and you will enjoy the ride even more. The new Duke 390 has precise steering and sharper handling because of its new chassis. It has also been equipped with new WP 43mm open-cartridge USD forks at the front and new WP monoshock at the rear whose preload can be adjusted according to your preference. The open-cartridge forks are low on maintenance and high on absorbing shocks. Similarly, the rear monoshock absorbs each bump very well and both the suspensions keep the bike very stable on uneven roads and even in the tightest of the corners and this bike does not have the skittish behavior like the previous model at all. On the other hand, the front-biased seating position shifts more weight on the front end which eventually makes you feel what the front end is doing in the corners. The new Duke 390 also gets new Metzelers. At the front, there is a 110/70 R17 tyre and at the rear, there is a wider 150/60 R17 tyre. These new tyres have less speed rating but offer tremendous grip in both wet and dry conditions. During our cornering test runs in the rains, the bike remained glued to the road all the time and always performed like a pro just like its nickname – “The Corner Rocket” (by KTM). And the other thing that helped this bike to remain stable and perform well were its brakes as the front gets a new 320mm, 4-piston caliper disc brake and the rear gets a 230mm, single piston caliper disc brake. The braking on this bike has improved tremendously. The feedback and bite from the brakes are amazing with the 2-channel ABS, which is standard. The ABS now gets three modes, Off – meaning the ABS will be off for both the wheels, Road – meaning it will be on always for both the wheels and the Supermoto mode in which the ABS will be functional only for the front while it will be off for the rear, just in case if you want to have some fun. With all done and said, this new Duke 390 is still a maniac, a very well-mannered one though! 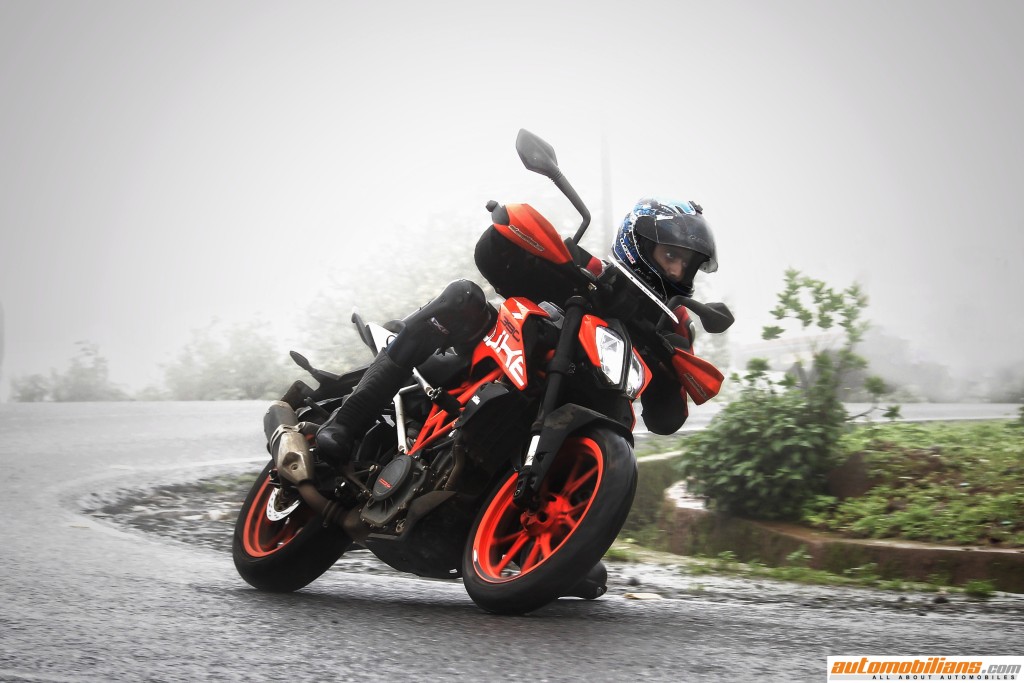 Its Verdict: If you will keep the old and new Duke 390 side to side, you will notice the differences easily and how sharper and agile the new one looks. The company has paid attention to every detail and it will immediately catch your attention for its sharper and aggressive looks. It’s a completely new bike with a lot of new features and mechanical changes. It has a very refined and smooth engine which has a great power-to-weight ratio. Despite its weight gain, it still manages to perform like a rocket through corners. You can easily steer it through traffic, as the power output is immediate and the clutch and gearshifts are light. The new LED headlight lights up the road ahead nicely and the TFT display looks brilliant. In short, the new Duke 390 has modern looks, better equipment, technology, smartphone connectivity which lets you keep your hands where they belong, new grippy tyres, better brakes, new suspensions, comfy ergonomics, sharper handling and KTM’s “Ready To Race” like performance. Yes, it does have some flaws, like it struggles at lower revs and also has a few ugly welds at the joints of its frame but it can still be ignored because of the more amazing things it offers. The new Duke 390 has grown up to be a mannered and matured bike which does not fail to offer you with a thrilling riding experience always. And for the price tag which it comes, makes it the jack-of-all-trades. 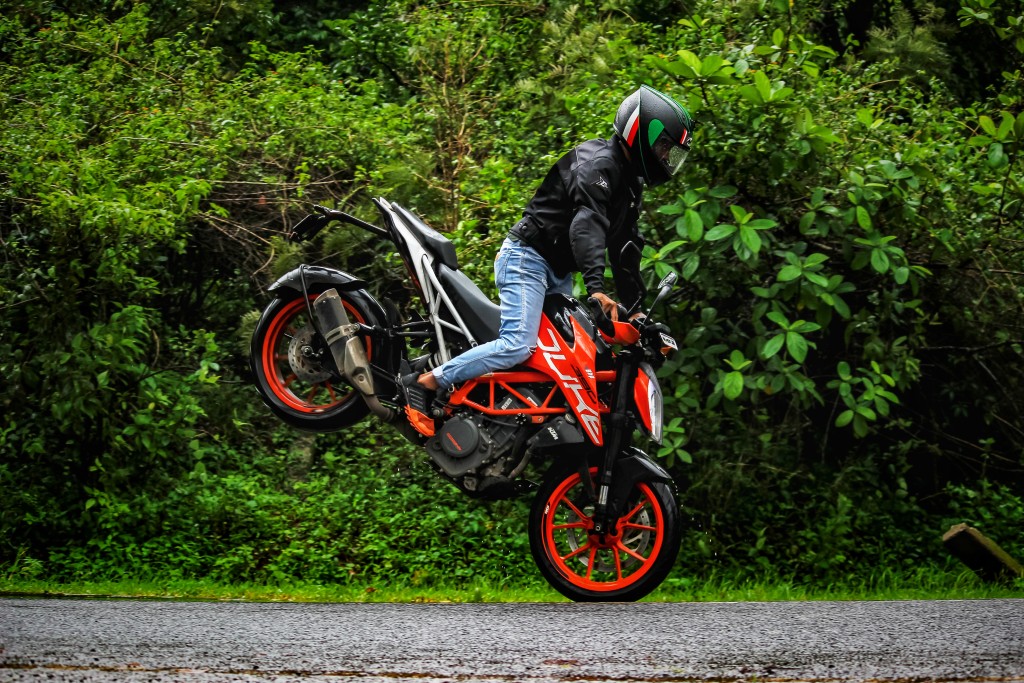 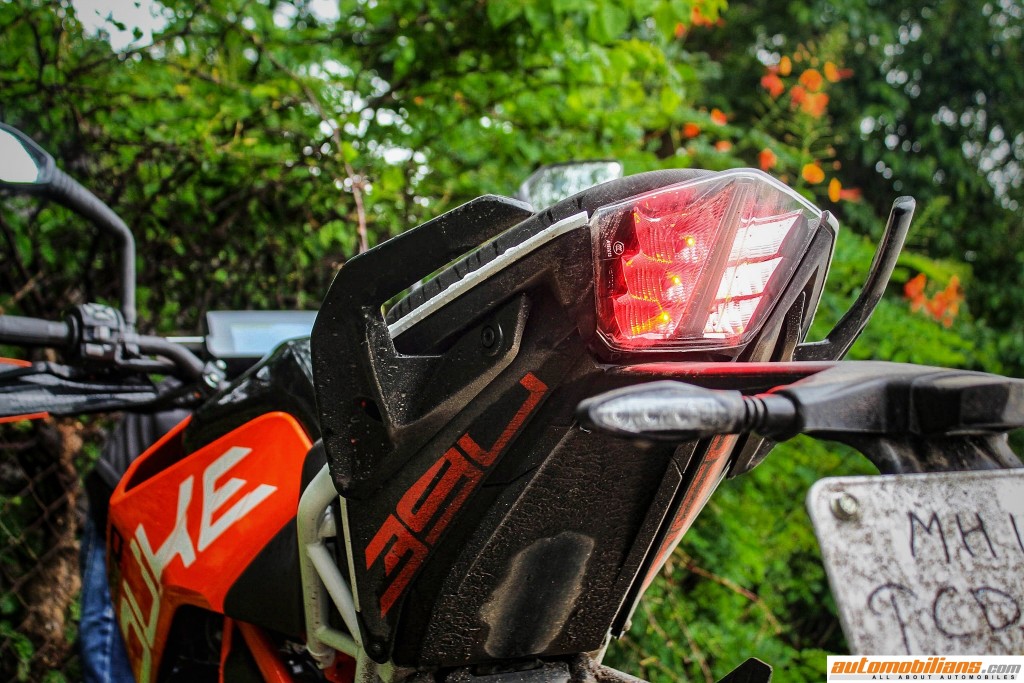 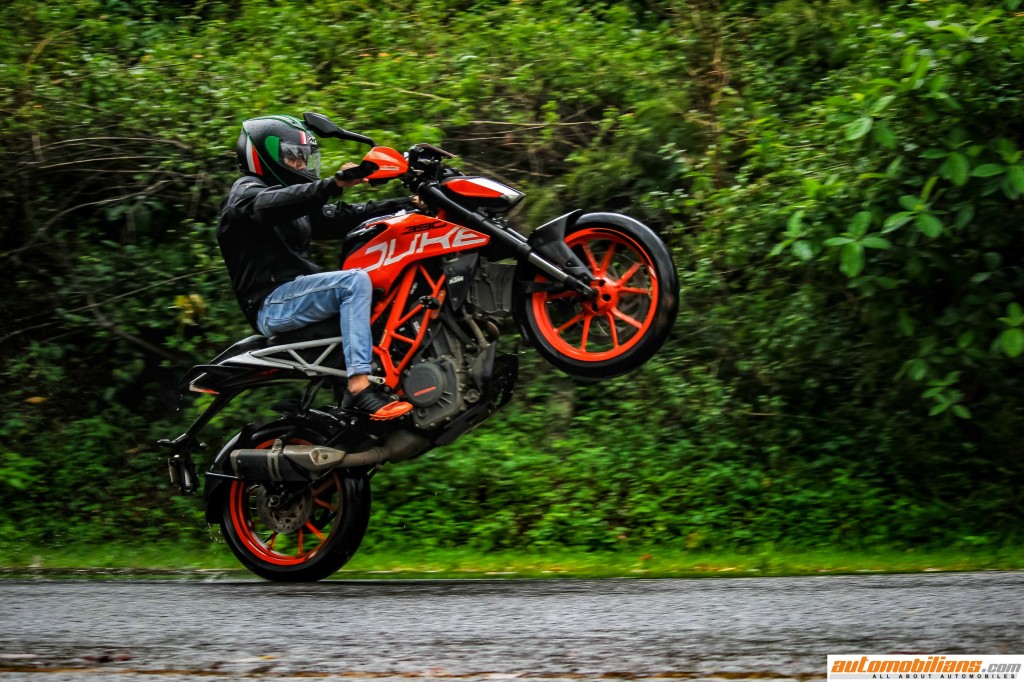