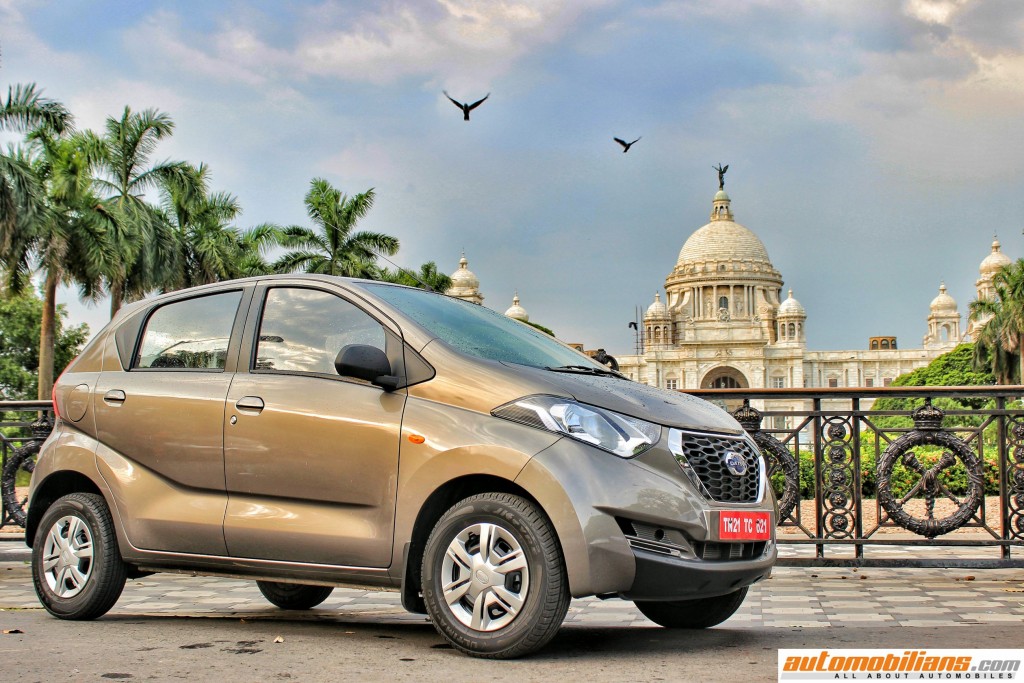 Datsun entered the Indian market in the year 2014 with the GO and later on launched the GO+ in the year 2015. The company has made these cars available at very affordable prices in India. These two siblings did not attract much of the buyers as they could not meet much of the consumer needs. So, the latest offering by the company is a budget hatchback, the redi-GO for the Indian market which is based on the redi-GO concept car which was showcased at the Auto Expo 2014. Datsun calls it as the India’s first Urban Cross and has placed it in the most affordable small four-wheeler segment in India, which is dominated by the Maruti Suzuki Alto followed by the Renault Kwid and Hyundai Eon. The Datsun redi-GO takes the best features of a crossover and mixes them with the major attributes of an urban hatchback. We drove the new Datsun Redi-GO in the city of Joy, Kolkata and read on to know about it in our first drive review.

Styling – Exterior & Interior: The design of the car is completely different form the other two siblings, it’s more stylish and fresh. Car’s design is based on the YUKAN (bold and brave in Japanese) design philosophy and the car looks smart and aggressive and simply resembles its concept model. The front end is dominated by Datsun’s familiar D-Cut grille; the Datsun logo takes a prominent central position over a honeycomb backdrop within chrome surrounding. The bold new headlamps look highly distinctive, their smooth flow into the bonnet creates an impression that the car is in motion even when it is standing still. The design of the headlights ensures the added safety of a strong light source for both beams. The bonnet is short and the bonnet lines are raised at almost the same angle as that of the windscreen making it noticeable as a crossover. The low waistline at the edge of the front doors helps in proper front visibility of the driver and gives the driver a clear view of the door rear view mirrors. The waistline is raised higher at the rear. There are twin characteristic lines that run from the grille upfront to the headlamps and to the taillights from beneath the windows. There are lines on either sides starting from the front doors and sweeping up till the bottom of the taillights which make the redi-GO look attractive. The taillights sit high up on the rear and are easily visible to following vehicles. Datsun does not simply calls it an urban crossover, the car gets the best-in-class ground clearance of 185 mm from the ground to its lowest part of the body which is indeed even taller than  some SUVs too. The front and the rear do get faux skid plates in contrast to the car’s color. The design of the redi-GO also shows that there is a significant improvement in the design department of the Datsun cars as that compared to its other siblings, the GO and the GO+. 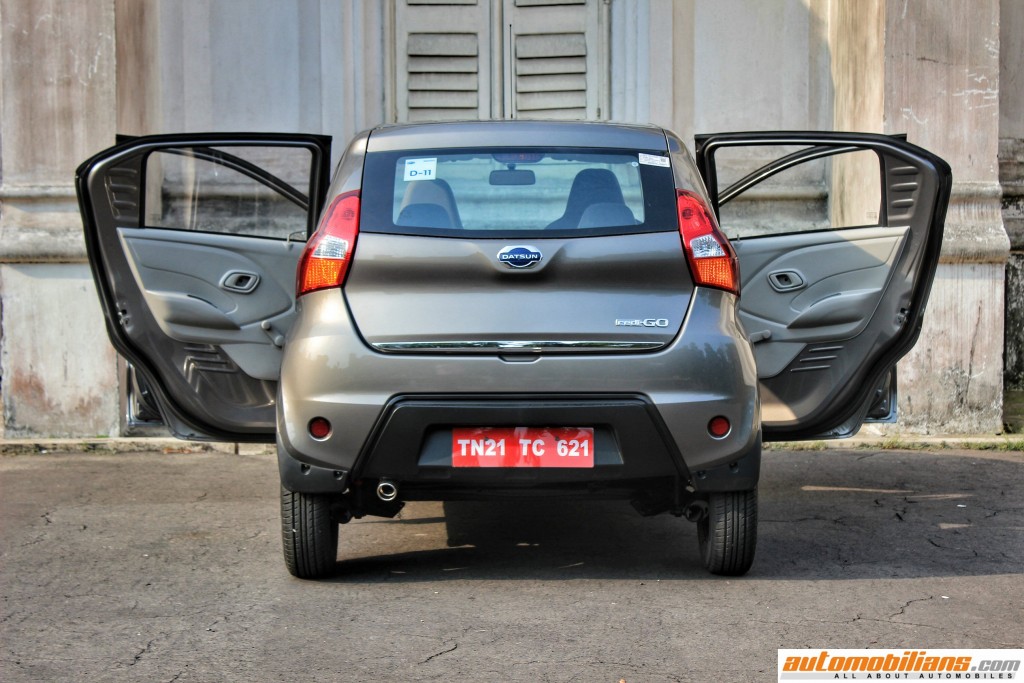 On the inside, the Datsun redi-GO gets some new interior bits but the plastic quality still remains to be the same as that of its siblings. The dashboard is neatly designed and the instrument cluster is identical to as that of the GOs’. As the design is new, interiors appeal to be decent and sophisticated. The redi-GO features an advance ventilation system of air vents on the dashboard that ensure 50% of air flow is directed towards the rear passengers to keep them cool. The AC does perform well in this small car. The seats are pretty comfortable and there is a lot of best-in-class headroom and knee room. The windscreen offers great visibility to the driver and it’s a boon during daily city commutes. The mirrors are placed well and they do offer decent rear views and they have to be externally adjusted as there are no internal adjustments even on the top-end model. The company has tried to trim the cost off in every possible way and so there is a single-blade wiper and static seatbelts. The seat misses out on height adjuster and there is no tilt adjuster for the steering wheel, but they don’t matter at all as the seat and steering wheel is placed well respectively. The IRVM offers decent visibility as the C-pillar is thick. The quality of the seat fabrics is a bit low grade but the cabin is roomy. The redi-GO boasts 222 litres of boot space to store your luggage. The Datsun redi-GO comes with an electronic power steering, power windows for front 2 windows (only on the top-end variant), CD audio system with USB and AUX input and radio and an optional driver’s airbag. Datsun could have equipped this car with the 7-inch touchscreen with navigation which is offered in the Renault Kwid. Bottle holders are placed under the HVAC controls and not in the door panels. There’s a glove box which fits in your belongings and an open shelf above it. Below the central AC vent is a cubbyhole that fits in your mobile phone perfectly.  The doors do expose few body painted metal parts and even the C-pillar does, indicating the clear sign of cost-cutting. Nonetheless, interiors of the redi-GO are better than the Maruti Suzuki Alto but not than the Hyundai Eon. 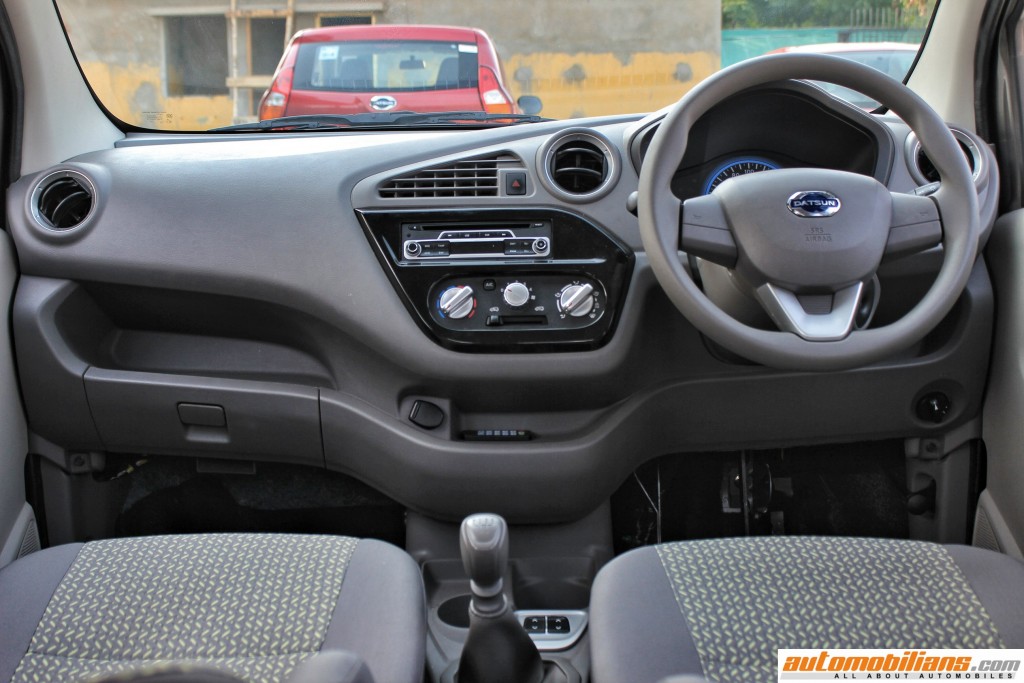 Engine, Performance and Driving Dynamics: The Datsun redi-GO gets the same 3-cylinder, 799 cc, all-aluminium petrol engine as that of the Renault Kwid. This 57kg engine produces 54 BHP of power at 5678 rpm and 72 Nm of torque at 4388 rpm. It is meshed with a 5-speed manual gearbox that powers the front two wheels. The gear shifting seems to be a bit on the harder side but thanks to the super-light clutch which does its job decently during shifting the gears, especially in the stop-go traffic. The reverse gear on this 5-speed manual car is a dog-leg reverse gear. As the car comes to life, vibrations can be felt, but as you move off the line, the vibrations seem to set-off post 1000 rpm. The car cruises smoothly till 80 km/h and the three cylinder’s rhythmic sound can be heard as you keep speeding post 80 km/h. Accelerate the car till the mid-range and you will experience the flat delivery of power in this range. Datsun India has claimed a top speed of 140 km/h for this tall boy and it accelerates from 0-100 km/h in 15.98 seconds, which is again a best-in-class feature in its segment. The redi-GO has an ARAI certified fuel economy of 25.17 km/l under standard test conditions and this number makes the redi-go India’s most fuel efficient hatchback. 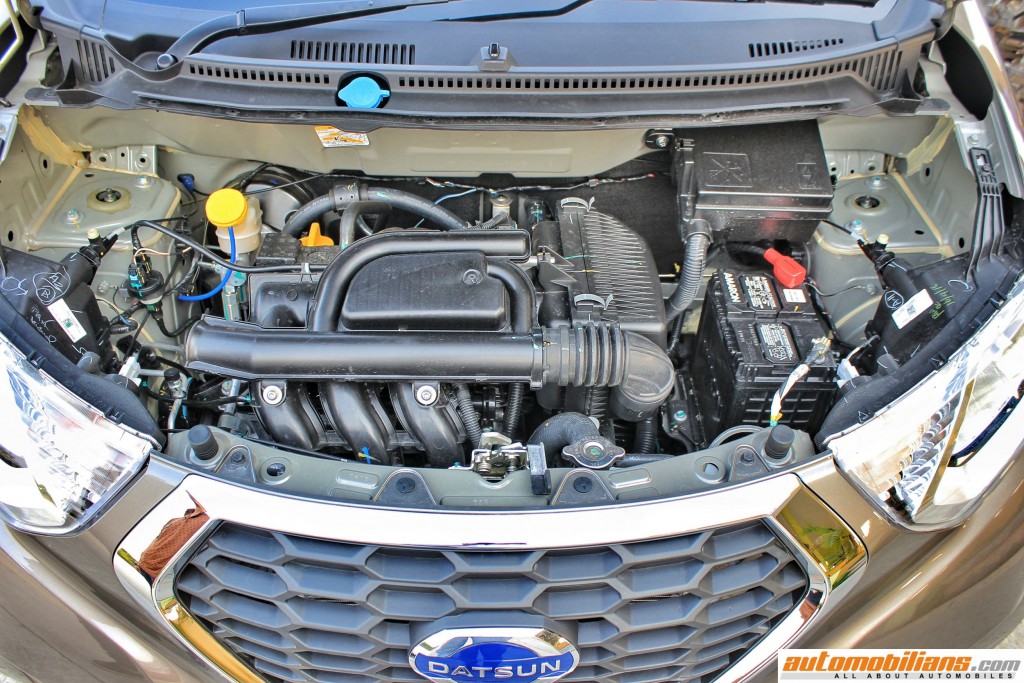 The speed sensitive electric power steering which is available only on the top-end model of the redi-GO range, has a torque sensor built into its system that ensures minimal steering input at low speeds making it more convenient and easy to manoeuvre on city roads. It has a turning radius of 4.7m. The redi-GO gets first in the segment, independent front suspensions with double pivot arm layout mounted on mini-sub frame and independent rear suspensions feature H-shaped torsion beam. The suspension setup is on the softer side and they soak up bumps and potholes relatively well. The car being tall and the suspension setup being soft, the body roll is kept under proper check at corners unless and until its limits are reached. The braking system too works well, it is claimed to be the best-in-class as the brakes bring the redi-GO to a complete halt from 100-0 km/h in 32.3 meters. Press them completely to experience the same as the gradual braking won’t impress you much. 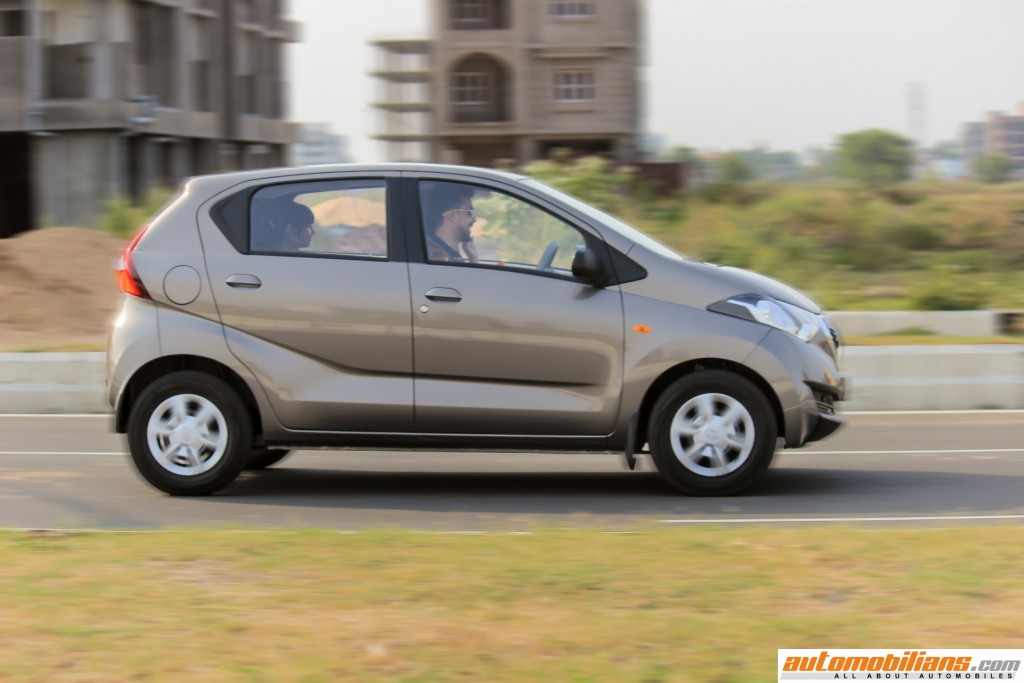 Safety: In terms of safety, the company offers a driver’s airbag in the top-end model and the Datsun redi-GO is equipped with an optimized braking system with disc brakes at the front, which deliver best-in-class braking performance by getting the car to a complete stop in a shorter distance. Redi-GO gets one air bag for the diver seat as an option in the top-end model only. 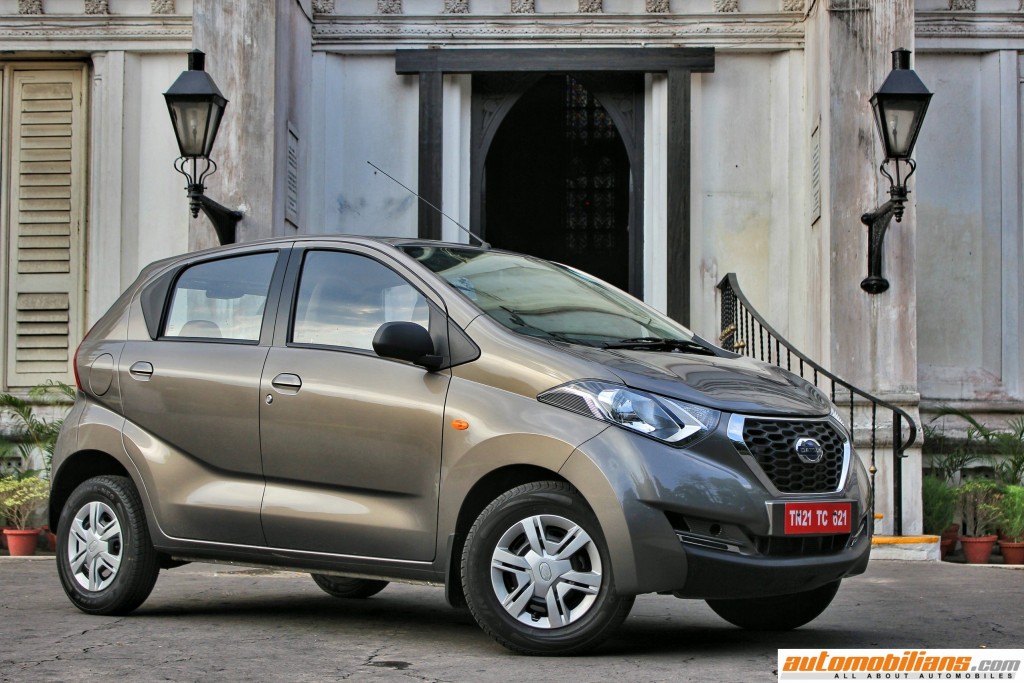 Verdict/Conclusion: The Datsun redi-GO is an attractive and a very good looking car in its segment. The company has not revealed its prices yet although they have stated that the prices will be in the range of Rs. 2.5 lakhs to Rs. 3.5 lakhs as the redi-GO will be built (98%) in India only. Datsun India has already opened its bookings at a nominal price of Rs. 5000/- at Snapdeal and will launch this car in the month of June 2016. The redi-GO offers various best-in-class features in its segment. The quality of the material on the inside and the car’s interiors are decent and not that impressive as there are many visible metal parts as the Datsun has used their cost-cutting technique which is also an immediate noticeable thing on the other two Datsun siblings but the interiors are comfortable and roomy. You also get an option of hiding them by choosing its accessories from the Datsun redi-GO’s catalogue. Datsun is also going to keep the redi-GO updating every six months, so what’s not there now will be there for sure later on. This car is an important product for the company as it marks the arrival of new generation of Datsun cars in India. While on our first drive, the car made us joyous in the city of joy with its sober performance, easy manoeuvring in the city during traffic, smooth driveability, stability and reliability as it is a Japanese car. 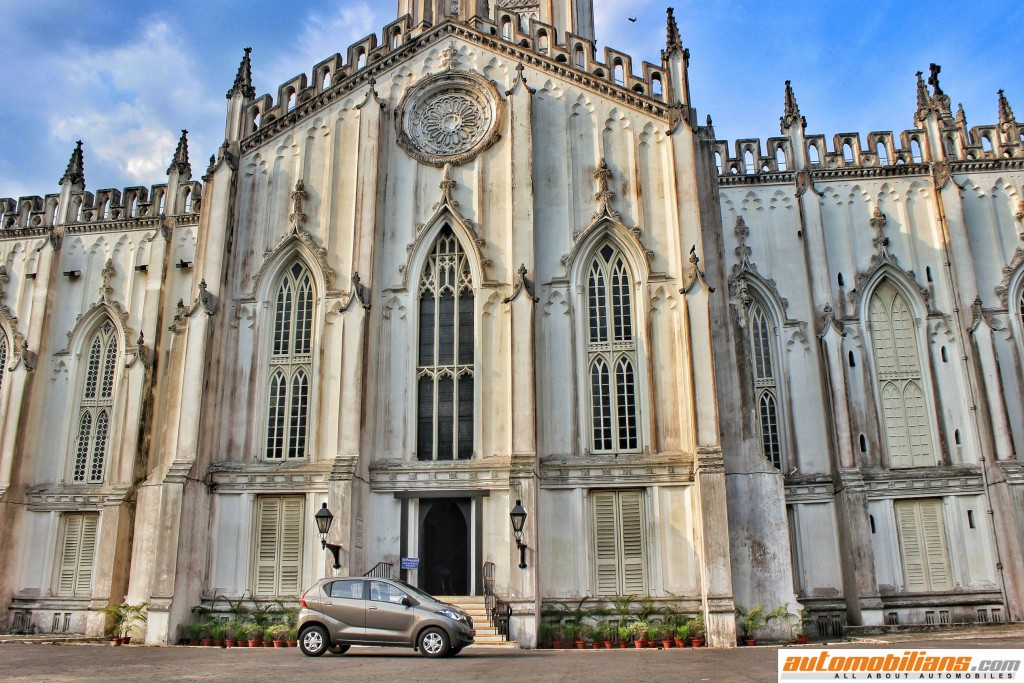 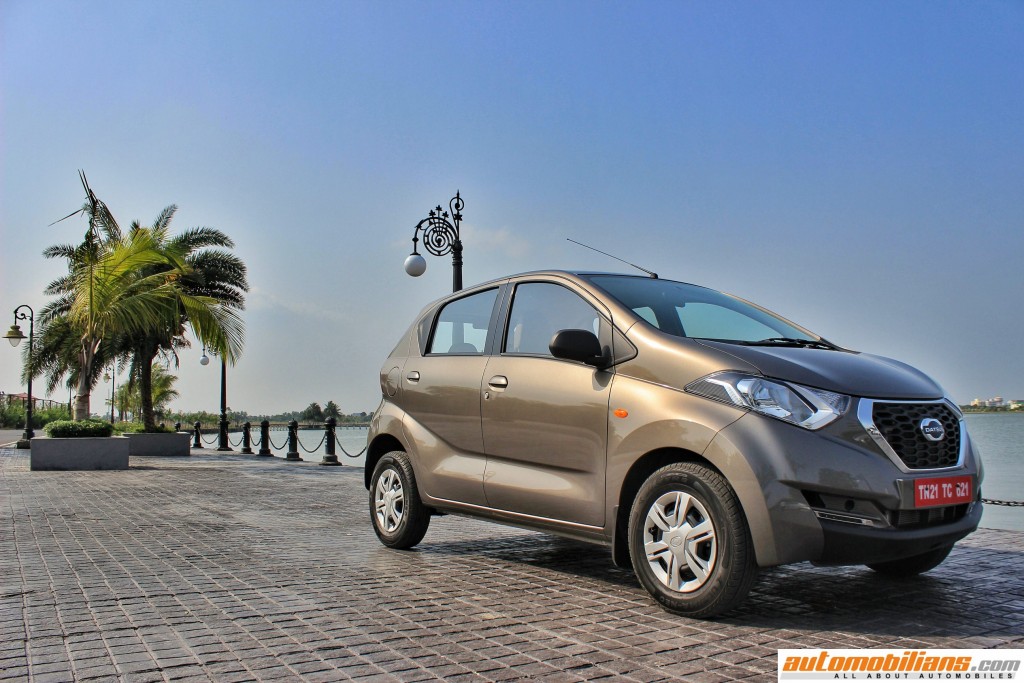 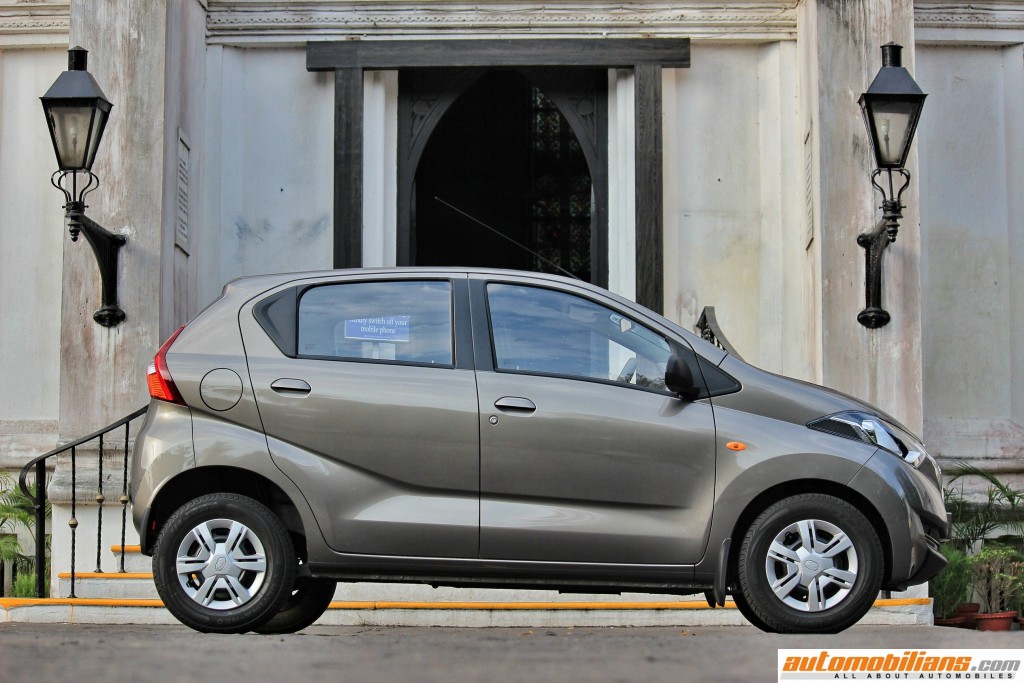