Tata Harrier is the first vehicle from Tata Motors, based on Impact Design 2.0 philosophy. The SUV features dynamic exterior and judicially designed plush interior. The SUV also features excellent infotainment with future ready connectivity. It is 5-seater with monocoque body based on OMEGA (Optimal Modular Efficient Global Advanced) architecture, derived from the legendary Land Rover D8. Tata Harrier is developed in collaboration with Jaguar Land Rover. Engineers from Tata Motors has optimised Tata Harrier for the Indian conditions. Born of pedigree, Tata Harrier is eagerly awaited by the automobile enthusiasts in India. 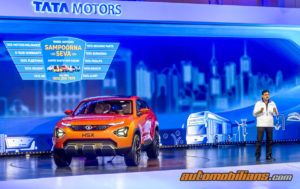 The name ‘Harrier’ (pronounced – Haria) as interpreted by the company – A dominant beast imbued with endless stamina and strength. Gifted with unwavering instinct. Effortlessly conquers every challenge thrown its way.
We got the first glimpse during the unveiling at Auto Expo 2018 as Tata H5X concept. Now Tata Motors is geared up to launch this eagerly awaited concept SUV as Tata Harrier. This SUV from Tata Motors gives us a sight of design philosophy of forthcoming vehicles. We already have seen the trend change in Tigor, Tiago, Hexa and Nexon Tata Harrier is an effort by Tata Motors in combining style, technology and performance. Experiencing vehicles launched in recent past by Tata Motors, Tata Harrier will not be a disappointment to the enthusiasts. Tata Motors is anticipating Tata Harrier will be the new benchmark in the Indian SUV market and raise the brand value of the company. During the announcement of the name – Tata Harrier, Mr. Mayank Pareek (President, Passenger Vehicle Business Unit, Tata Motors) said, the company is all prepared to launch the next generation SUV to set a continuous trend of higher standard in Indian market. Tata Harrier is expected for a commercial launch in early 2019.
Enthusiast can dig more information about Tata Harrier on following links.
https://harrier.tatamotors.com
Instagram @Tataharrier | Facebook @TataMotorsGroup | Twitter @TataMotors

View all posts by Dibyendu Joardar →
A professional with an experience of more than 17 years in the field of advertising. Started his career in ad agency in Chennai as a visualizer. Worked his way up and joined reputed garment brand in Mumbai as Publicity Manager. A photographer, cinematographer and graphic designer has a good technical knowledge. Technical videos are his forte. He is always hungry for applied knowledge and keeps learning from the technical team.