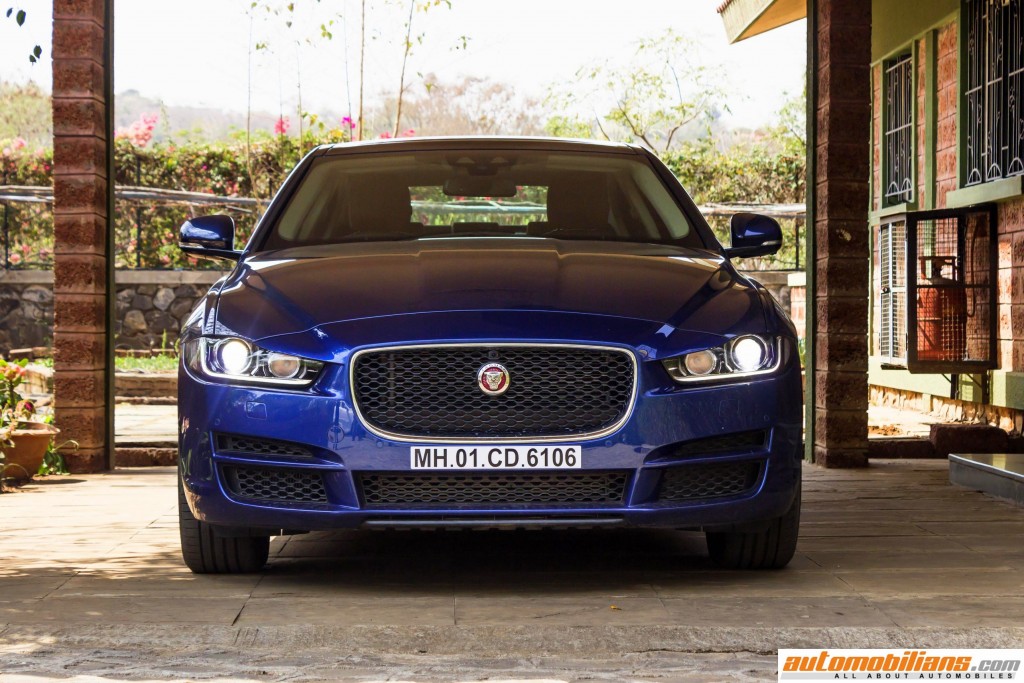 The Jaguar XE is the new compact executive car by the British manufacturer which was unveiled in March 2014 at the Geneva Motor Show. The Jaguar XE is the first compact executive car to be built by the Jaguar ever after its 2009 model year X-Type. This new sports saloon, the XE is also the first Jaguar to be produced using Jaguar’s new modular aluminium building design which has helped the Jaguar to feature either rear-wheel drive or AWD powertrains. The Jaguar XE is the first car to use an aluminium monocoque chassis in its segment.  The company is offering the new XE in only two petrol trims, the 197 BHP Pure and the 237 BHP Portfolio in India while the diesel variant will be launched later on this year.

Exterior Design: The man to design this car is Ian Callum, the one who also designed the F-TYPE so for sure this new XE had to have the design cues to be inspired from the F-TYPE. The front resembles the XE’s elder siblings; the XF and the XJ while the long pop-up like bulging bonnet that narrows gradually into the chrome outlined front grille with Jaguar’s  logo in it and the dual exhaust pipes and the wrap around LED taillamps and the side chrome air vents are directly inspired from the gorgeous F-TYPE.  The signature ‘J-Blade’ LED DRLs look nice and the Bi-Xenon HID headlamps give the car more of a modern and an aggressive look. The boot-lip gets a small spoiler too which adds up to more sporty look of this car. The car’s long bulging bonnet leads in to a swooping roofl and a short tail making it a compact executive car. The alloys of the car are not very attractive but they do have a decent design. Whatsoever, the car’s new and fresher design looks leaner and meaner and its muscular lines and curves make you to fall in love with its design again and again. It also has the abilities to attract many eyeballs and to put a smile on every face and of course the Jaguar has a better looking car in the compact executive car’s segment.

Interior Design: As you step inside the car with the keyless entry key, you get the essence of luxury. The Windsor leather seats hug you and you sit low in this car. The low seating arrangement does give you a good view of the road ahead and on its side. The other thing which you will notice is the speed-boat like arc trim layer, the ‘Riva Loop’ which is inspired from the Jaguar XJ, runs from one door to behind the dashboard and then to the other door. It looks unique and makes the dashboard look wider. The door thus gets two levels on them. The above level has the window and ORVMs adjustments buttons while the below one holds the grab handle to open and shut the door. As you sit on the driver’s seat, there is Jaguar’s chunky sports steering wheel for you and behind it are two sports car racy analogue dials and a message center in between them which are directly inspired by F-TYPE or you can say the steering wheel and the instrument cluster is from the F-TYPE. The center console too looks well designed and everything on it is in the proper reach of driver and passenger. There’s a nice high resolution 8-inch InControl touch screen on the center console which shows a lot of information with AUX, USB and Bluetooth connectivity and navigation. The AC vents are placed properly and have a good throw of AC to cool the car in fraction of seconds. There is also the Jaguar’s signature ‘Hockey Puck’, a rotary gear selector which rises up when you awake the Jaguar XE by pressing the Start/Stop button. The seats are comfortable, cozy and close fitting which can be widely adjusted as you are sitting in a sports saloon. The back seats are placed lower than the front ones because of the sloping roof just to give the passenger more of the headroom. The larger doors help you to get in but you actually climb in and sit behind as the seats are also placed at the extreme end of the cabin so as to add more legroom. But the wide transmission tunnel and the big rear AC vents somewhat make the middle space unusable for the third occupant. Overall, the legroom and headroom is decent in this car. There is also a panoramic sunroof for your enjoyable getaways and journeys. On the back, there is a wide boot to fit in your entire luggage without any hesitation as the spare wheel in this car is placed under the floor. The boot can be opened by pressing the button on the car’s key for your convenience but has to be closed manually. The Meridian surround sound system has a good audio quality. To sum up, the interiors of the new Jaguar XE are plush and graceful. 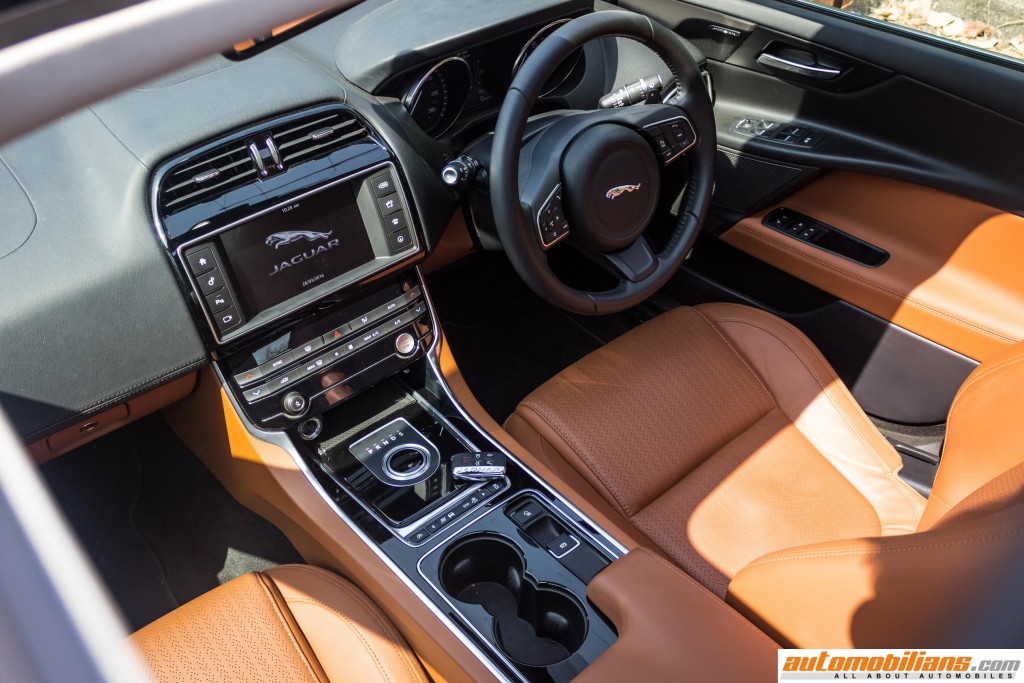 Engine & Performance: Jaguar has launched the new XE in only two 2L turbocharged petrol trims as of now, the 197 BHP 20t Pure and the 237 BHP 25t Portfolio. The 2L Ingenium diesel is said to be launched later this year. The one which we drove and you see here is the 2L turbocharged 25t Portfolio variant. It produces 237 BHP of maximum power @ 5500 rpm and 340 Nm of maximum torque @ 2000-4000 rpm on the move. It’s the same engine which is also offered on the XF and the XJ. XE’s transmission is mated to an 8-speed automatic gearbox and all the power is sent to its rear wheels. The Jaguar XE is built on the lightweight aluminium monocoque chassis and that 237 BHP of power makes the XE a rocket ship. It’s fast. There is ample of torque right from the bottom end till its redline. Cruising through city becomes much easier because of the ZF 8-speed auto transmission but it gets caught out sometimes with a clunky downshift. Use the paddle gear shifters behind the steering wheel to have a hassle free drive.   The engine being sourced from the Ford, which the Ford calls it, an EcoBoost engine actually does its job on this car very well. It performs more than its job. The engine provides adequate power and performance to fit the sporty character of this sports saloon. 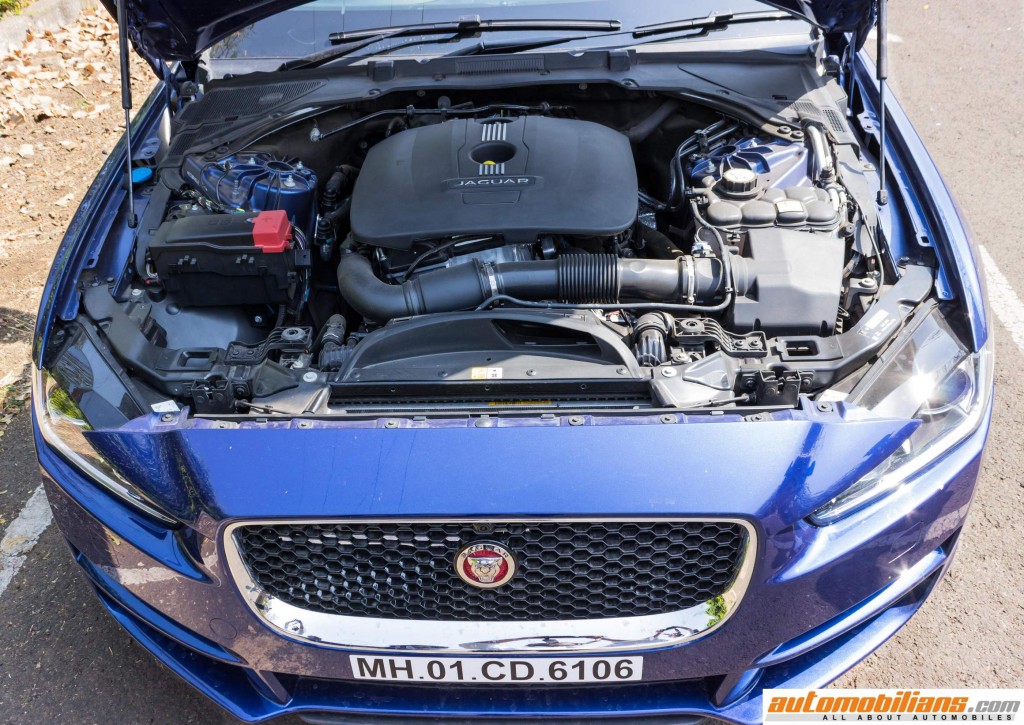 As said in the above para, the XE does perform well in the city and so it does on the highway. The engine is finely tuned and is smooth all the way till redline. It does the 0-100 km/h sprint in 6.8 seconds and tops out at 250 km/h. Jaguar claims 13.05 km/l fuel efficiency for this car, but under normal condition you can expect it to be around 10-12 km/l. Once this Jag awakes it growls and it is noticeable inside the cabin too. As I rolled down the windows on the move I could hear the melody that its dual exhausts made. It reminded me of the great auditory bliss of the Jaguar F-TYPE R Coupe. It crackles and backfires while downshifting. It is not that loud but it is indeed to make you grin and enjoy your drive. There’s a joy in driving this sports saloon.

Driving Dynamics: Jaguar considers itself to be a performance luxury car brand and so does it classifies the new XE as the sports saloon than just a luxury car, with which we also agree. The turbocharged 2L petrol engine delivers smooth power and linear acceleration. The XE handles itself dynamically on the road. The electrically assisted steering is light and the lightweight aluminium monocoque chassis makes it a perfect driver’s car. There is Eco, Normal, Dynamic, Winter and Sport drive modes to choose from which also affect the engine response, the steering response and the AC’s performance. The Dynamic mode is simply so furious that it can even make the car fly. The car does remain stable in every situation. The tyres on this car are all 255/55 R17 tyres. They provide ample of grip. Suspensions too are perfectly tuned. Even on flat high speeds they do not unsettle and to get this car to a perfect stop and to keep it in a proper control there are the all wheel disc brakes. The XE’s TVbB (Torque Vectoring by Braking) maximizes control through the tightest corners. So the combination of a well balanced aluminium monocoque chassis, power & torque, electrically assisted steering, tyres, suspensions and disc brakes makes the XE a charming ride and it does not feels shy to get its tail out on the corners. 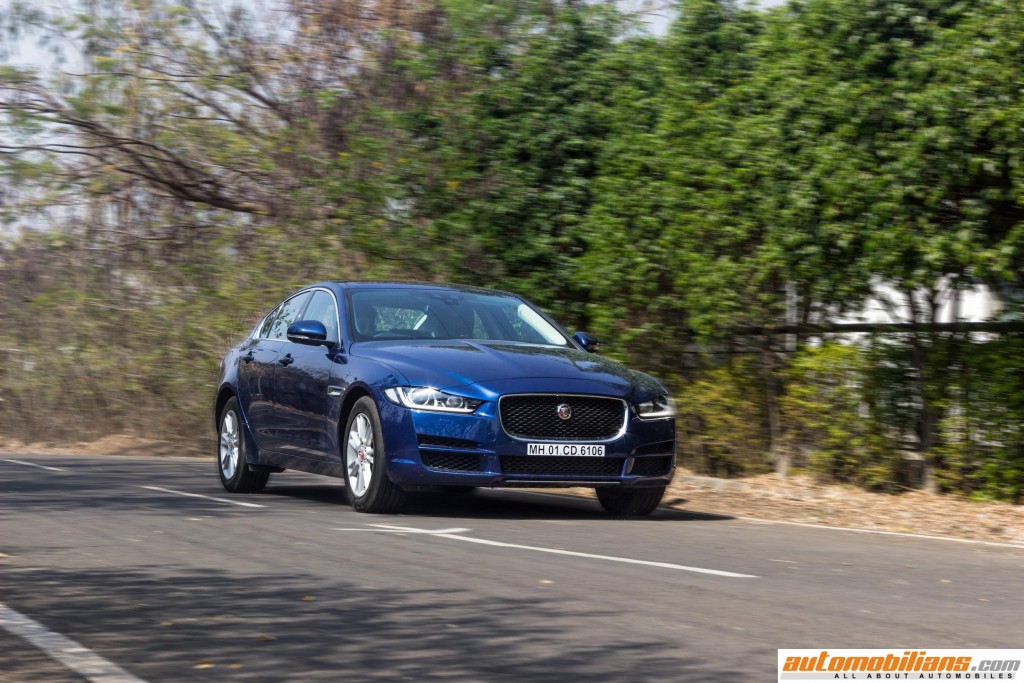 Safety & After Sales Service: To start with, the Jaguar XE scores 5 stars in the EuroNCAP car crash test. It has 6 airbags, ABS with EBD, DSC, ASPC, traction and stability control, blind spot sensors, brake assist, pedestrian contact sensing, surround camera, TPMS, Whiplash protection, hill start assist, EPB, autonomous city braking and rear cross traffic warning as standard in this car. The Jaguar XE comes to India via the CKD route and gets assembled at the manufacturer’s Pune facility and with growing number of Jaguar’s service networks and roadside assistance, after sales service won’t be of any issue for this Jag.

Verdict/Conclusion: The new Jaguar XE is something what the X-Type wasn’t. It is sophisticated, it is modern, it is driver friendly, it is sporty, it is luxurious and it also sounds great. This little feline excels in the terms of performance. You will have to compromise on its rear seat comfort but you even get many other great features in this car. Driving this kitty is just something as close as to the happiness, something that you will love to do daily. It caught my attention at the very first moment and since then I do have a soft corner for this car in my heart for the way it performs, drives, handles and looks in that BlueFire paint scheme. It may have borrowed its design cues from the XF, the XJ and the great F-TYPE but it own sets new standards for itself in its segment. As once a wise man has said – “It’s a Jag!”, look no further to buy it if you have that much of amount in your bank account. 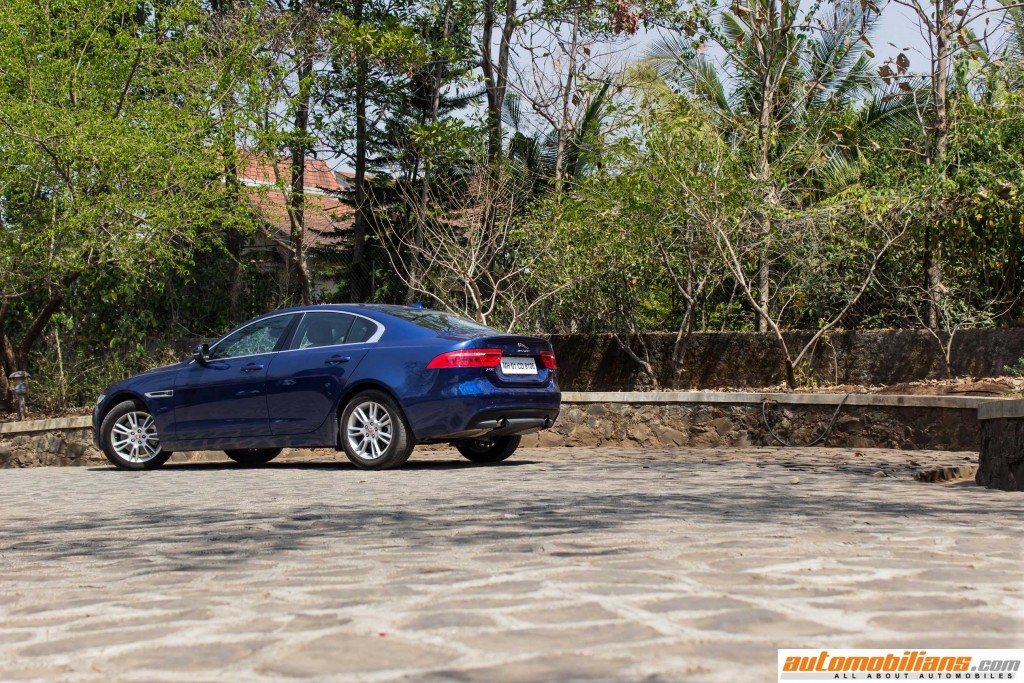 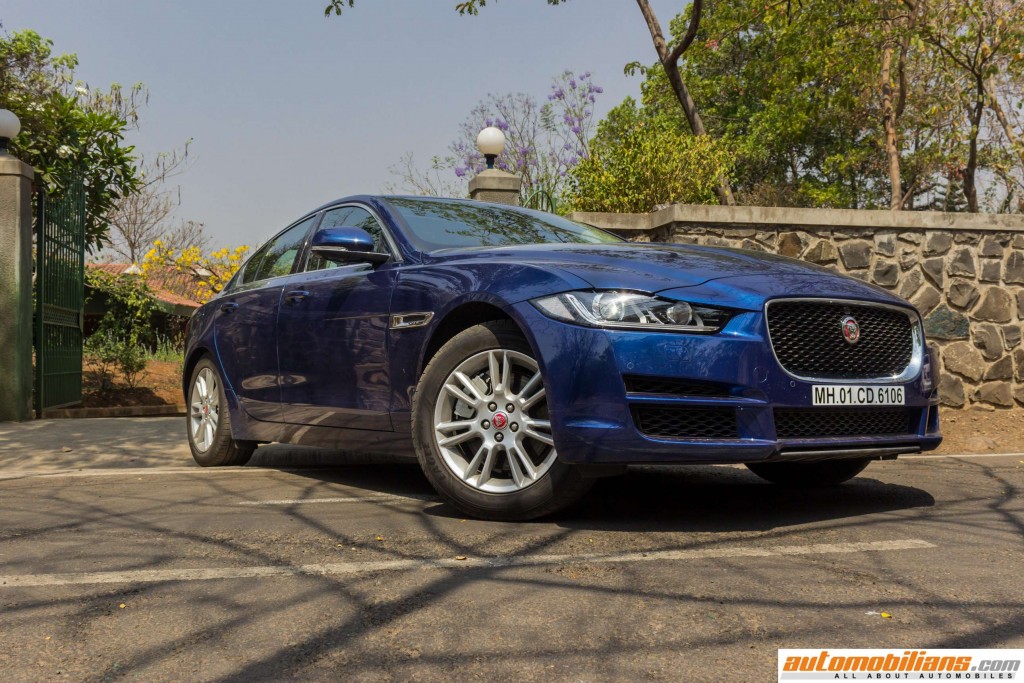 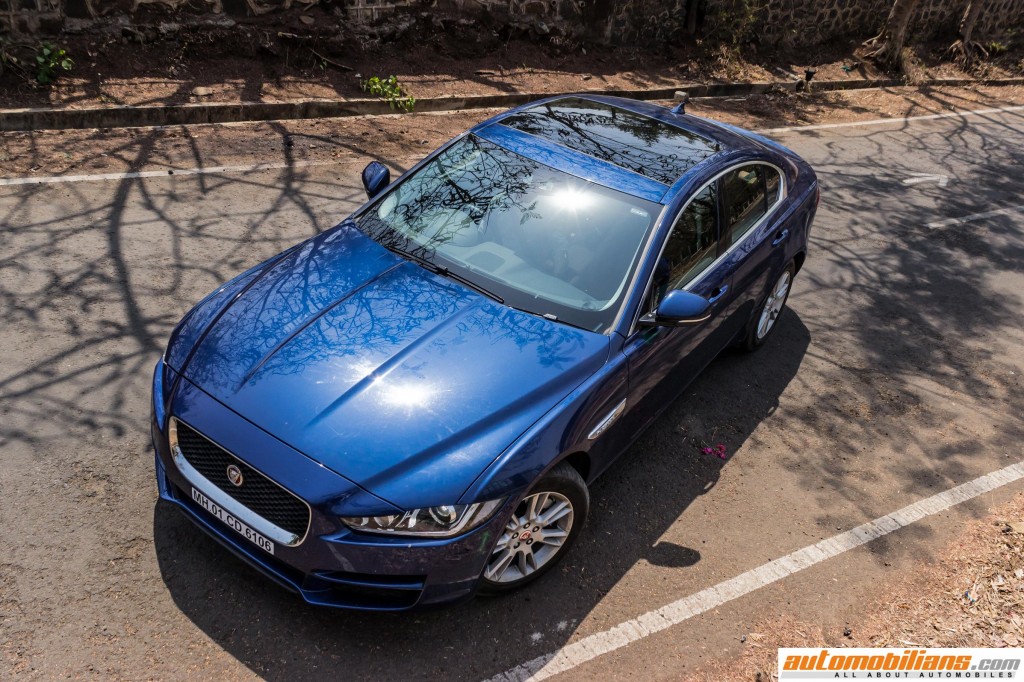