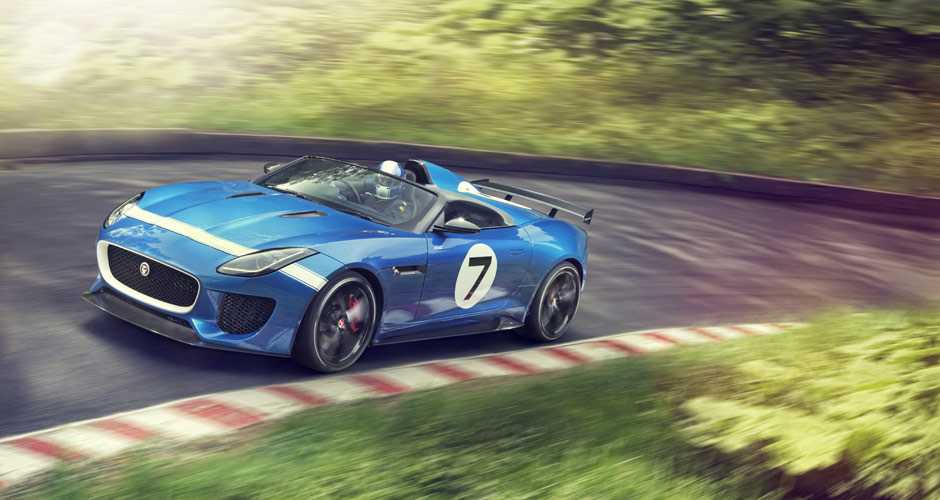 Jaguar’s F-TYPE-inspired Project 7 concept has made its dynamic debut at this year’s Goodwood Festival of Speed.

“When you look at this car, it has got an enormous amount of appeal. It’s just full of desire – you can see that its sole purpose is to be enjoyed. Project 7 is a very special car – not just because it’s a one-off, but because of its purity of purpose. It’s pure Jaguar.”
Ian Callum, Director of Design, Jaguar

Project 7 – based on the acclaimed F-TYPE and produced to showcase the creativity of Jaguar’s design and engineering teams – made its dynamic debut at the 2013 Goodwood Festival of Speed on 12th July. The name acknowledges Jaguar’s seven victories at Le Mans between 1951and 1990; its striking blue paintwork is reminiscent of the victorious Jaguar D-types of 1956 and1957.

Although it is not intended for production, Project 7 is not merely a static concept, but a fully-functional, high-performance sports car. F-TYPE’s rigid all-aluminium architecture is the perfect starting point, with power provided by the 405 kW version of Jaguar’s 5.0 Litre V8 Supercharged engine – an increase of 41 kW over the F-TYPE V8 S.

The unique exterior celebrates Jaguar’s sporting bloodline. F-TYPE’s two key ‘heartlines’ remain, with the most prominent change being the D-type-inspired rear fairing section that incorporates a rollover hoop and swoops down from behind the driver’s head. The roof system has been completely removed.

Aerodynamic modifications include a carbon fibre front splitter, side skirts, large rear diffuser and a fixed rear spoiler with a 14-degree angle of attack, giving Project 7 a low, unified, muscular stance. The side louvres and bonnet vents are also carbon fibre, while the carbon fibre and aluminium wing mirrors draw inspiration from those on Jaguar’s C-X16 sports car concept, from which F-TYPE is derived.

The windshield has been lowered, while a new nose design incorporates revised air intakes and headlights with gloss black surrounds instead of chrome. The car sits on 50.80 cm (20) Blade forged-alloy wheels with carbon fibre inserts.

The cockpit of Project 7 is no less impressive than its exterior. The driver sits in a composite bucket seat, lowered by 30mm, and is gripped by a four-point racing harness. The passenger seat is replaced by a unique helmet holder, which carries a custom-designed Project 7 helmet in matching blue paint and graphics, secured by its own harness.

The seat and the insides of the doors are finished in a quilted racing-style diamond pattern. There are carbon fibre inserts on the console and SportShift selector, the start-stop button is gloss black and the steering wheel is equipped with machined aluminium paddles.