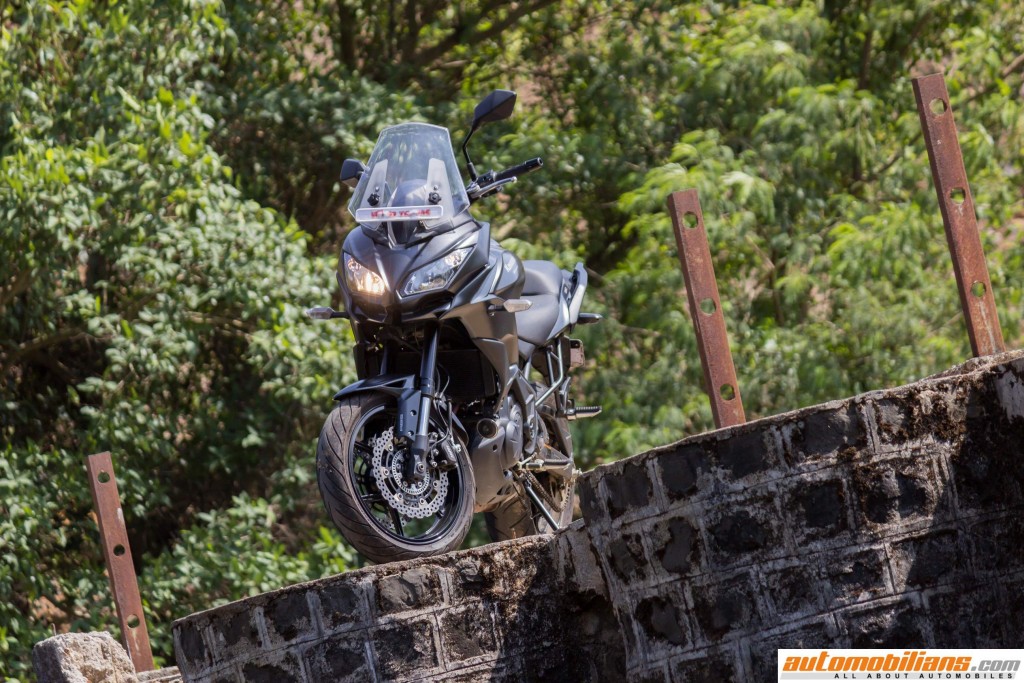 The Kawasaki Versys 650, also known as KLE650 was first unveiled at the 2011 EICMA show. Later in the year, 2014, it received an update and was showcased at the Intermot show. While now, the 2016 edition, Kawasaki Versys 650 ABS, a middle-weight adventure tourer is finally here in India and it is the younger sibling of the Kawasaki Versys 1000.  As the country is seeing a rise in number of touring souls, the Kawasaki has hence brought down their international tourer to India. The Versys 650 ABS is a combination of both adventure tourer and a sportsbike. On paper, it impressed us with its great performance figures but we took it for a spin to find out if the numbers were really good in the real conditions, read below to find out.

Its Styling: The Versys 650 ABS gets the same aggressive design as that of the Versys 1000. The design is sharp, aggressive and sporty. It is the same aggressive design that has been used by the company in its racing motorcycles or superbikes. On the front, there is a tool-free adjustable windscreen which completely takes care of the wind blast and the sporty front fender makes it look aggressive. There are the long travel inverted front forks which provide longer travel movement. On the side, the bike gets a semi-naked structure and this adventure bike gets an under-belly exhaust. The single-sided swingarm is designed pretty well and the designers of this machine have given importance to the smallest of the parts too. The seats are carved well and have a nice design with a perfect match of tail. The grab rails are superb. They offer superior grip and they also get the perfect luggage mounts for your saddle bags and hooks. The tank is scooped well too. You can easily mount your another saddle bag over it. The LED taillights look awesome. The quality of the body parts is too very nice. Everything on this bike is in proper place. The engines cover casing, the exhaust’s design, the suspension’s positioning and the body parts all look neatly done. The underbelly exhaust, the semi-naked fairing’s design makes it look different from the Versys 1000 in terms of styling. The Versys 650 ABS motorcycle is an art and impresses everybody with its killer looks. But yes, only one color is on offer as of now and it is not the Kawasaki Green. 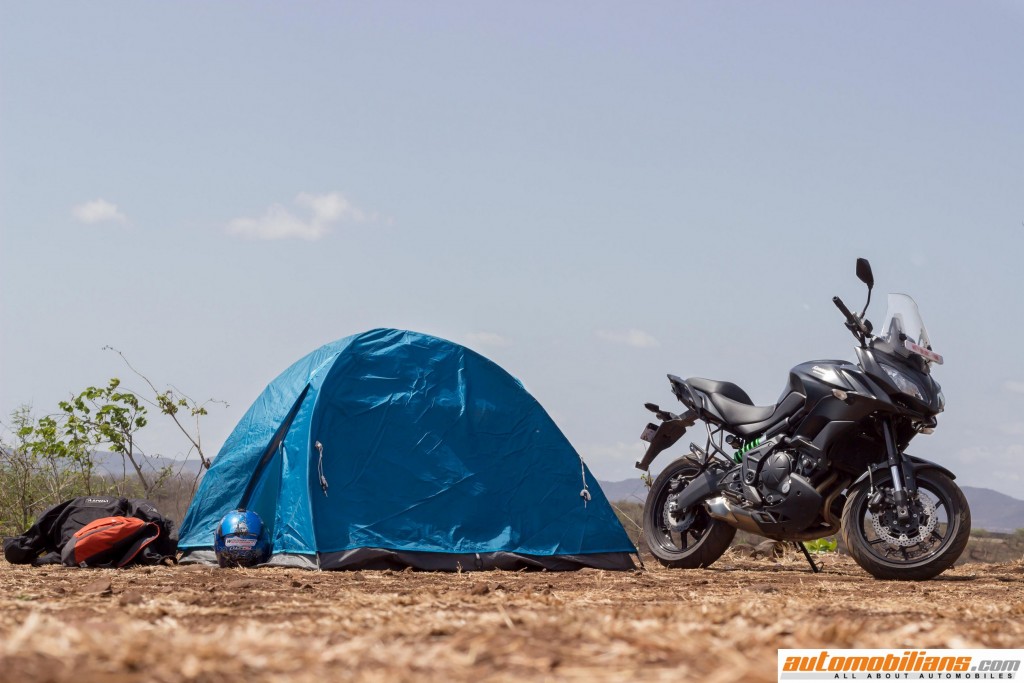 Its Switchgear and Instrument Cluster:  The Versys 650 ABS comes with both digital and analogue instrument cluster. It is the same cluster that is seen on Ninja 650. The tachometer is analogue which houses warning indicators and the digital cluster displays – odometer, trip meters, fuel range, fuel consumption and fuel gauge, clock and temperature. The switchgear remains to be basic as compared to other Kawasaki superbikes. On the left are the horn button, low & high beam switch, pass light switch, turn indicator’s switch and hazard light’s switch. On the right are the engine kill switch and the ignition startup button. 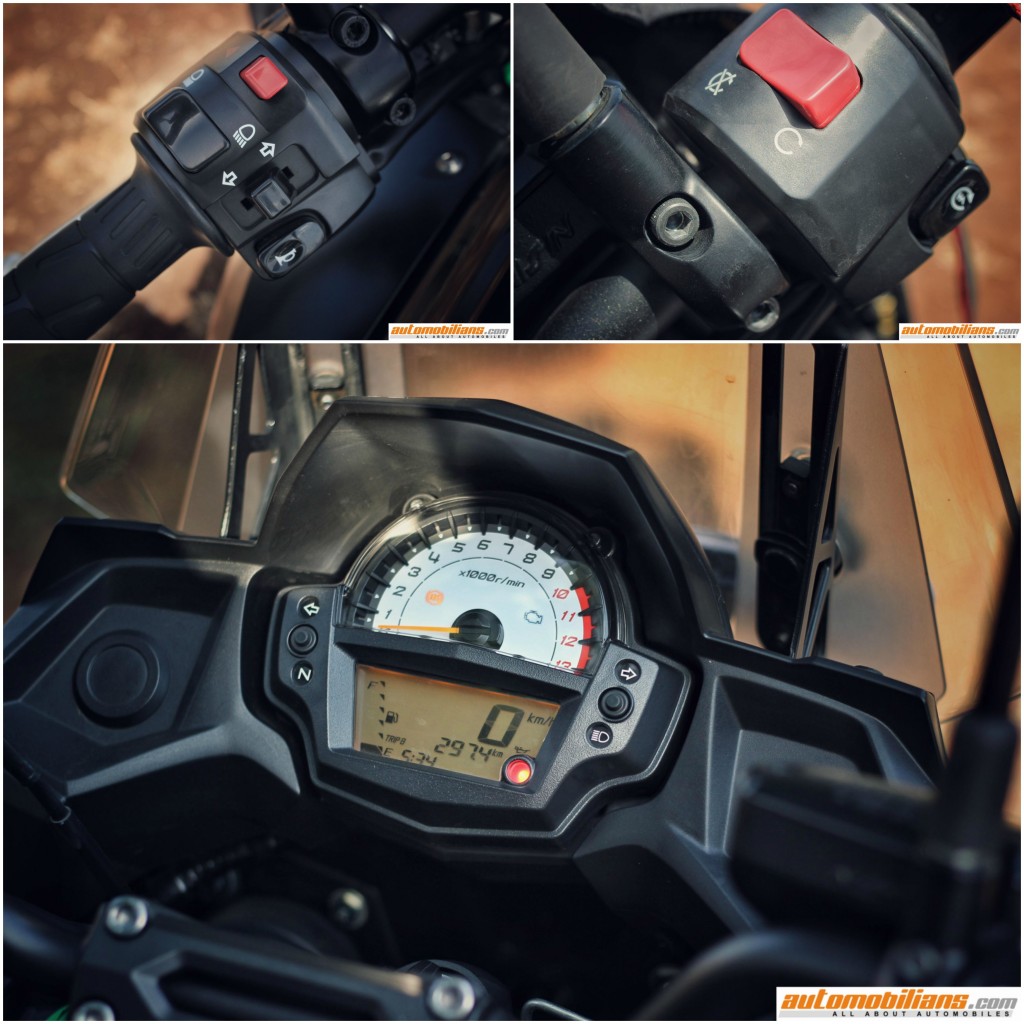 Its Ergonomics: The Kawasaki Versys 650 ABS boasts an upright seating position. The Versys 650 ABS is tall motorcycle. Its saddle height is of 840 mm, which is as equal to 2.78 ft. I am 5 ft 8 inches taller; still I had issues in reaching the ground with both my legs. This adventure motorcycle is yet rider friendly and if you are more than 5’8”, it will be your best friend on every terrain. If you are less than 5’8”, it will be more of a trouble for you but as you will get used to the motorcycle then nothing will keep you back from riding this bike. My colleague, who is 5’4” loved riding this motorcycle and did not face any trouble of its saddle height. Reaching out to the handlebar is an easy task, its switchgear are all in perfect reach and between the seat and the handlebar is the big 21 liters fuel tank, no matter what the narrow frame helps the rider to ride this bike more comfortably. The pillion rider feels at home because of the soft cushioned seats and perfectly placed grab rails. The rider and pillion rubber mounted footpegs are all placed well and they do keep away all the vibrations. The Kawasaki RVMs offer clear vision to the rider. The bike boasts an aerodynamic design and the tool-less adjustable windscreen keeps the wind in proper check. The upright seating position, comfortable seats and frame structure makes this motorcycle a nimble handler and an ideal machine for daily commuting, long adventure rides and weekend getaways. 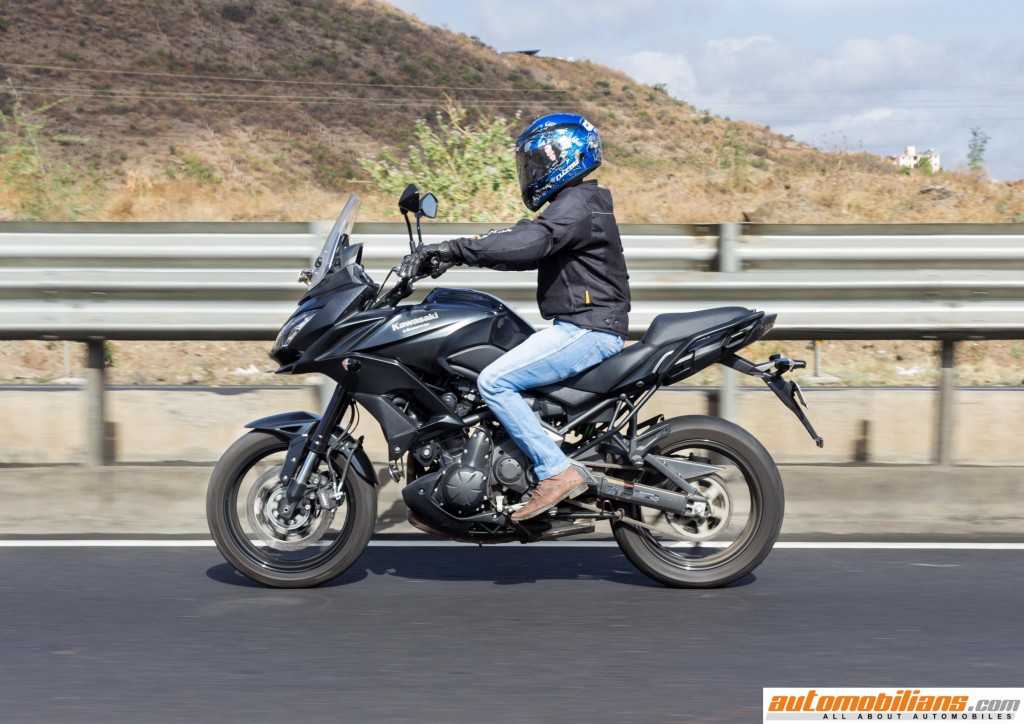 Its Engine and Performance: The Kawasaki Versys 650 ABS is powered by a dependable fuel-injected, liquid-cooled, 649cc, 8V, parallel twin engine. It produces 68 BHP of power @ 8500 rpm and 64 Nm of torque @ 7000 rpm. The engine is meshed with a 6-speed gearbox. The gear shifts happen smoothly because of the slip function but some extra efforts are required to operate the clutch. This engine being derived from the Ninja 650 has smooth acceleration but is tuned for higher torque. The engine is more low and mid-range friendly but goes up till the rev limiter smoothly. Open the throttle and you will be impressed with the way this bike performs.

It has a lively performance. This six-speed geared tall horse is always ready to impress you with its performance figures. Its engine’s performance inspires you so much that you will always opt for it for your daily commutes. It’s tall and fast at the same time. But better to say, it is faster during your long hour rides. Its low and mid-range power delivery keeps you happy all the time. It doesn’t minds going all the way upto 200 km/h and it cruises on 150 km/h ekdum aramse and to keep it more stable at such speeds, the windscreen does its job very well over here. It has enough of torque that doesn’t let this bike to move off the line without popping its front wheel up. It did return us a mileage of 17 km/l in the city while on the highways 22 km/l was easily achieved. It also has a very refined exhaust note, calm and silent. 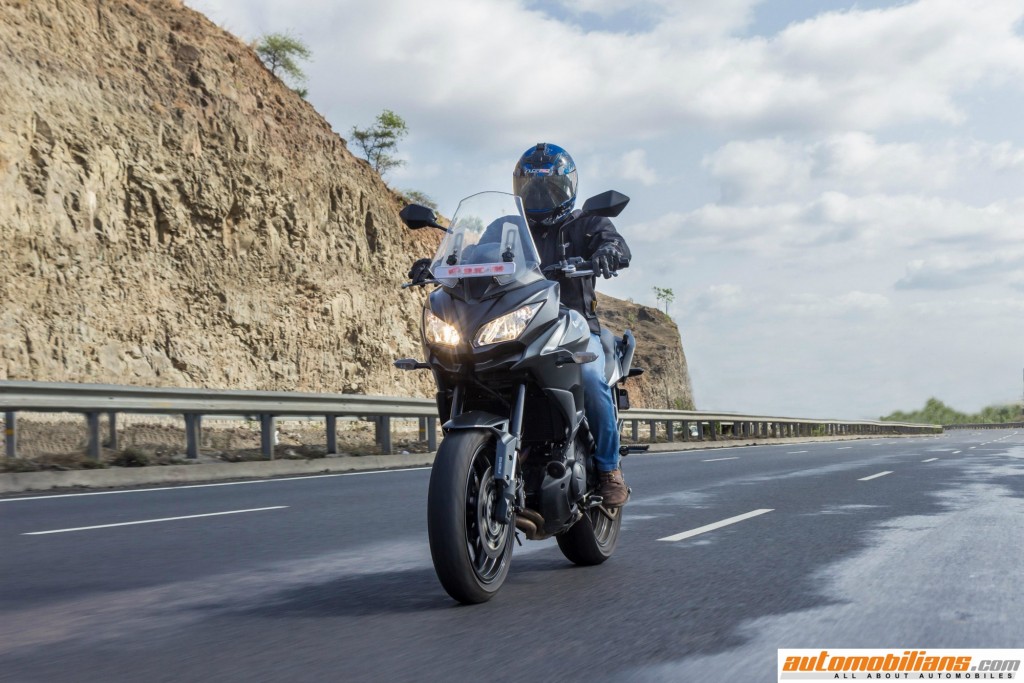 Its Riding Dynamics: The Versys 650 ABS is a tall motorcycle which is built on a diamond frame made up of high-tensile steel. It weighs 216 kgs. The riding dynamics of this tourer completely depend on its brakes and suspensions. On the front, there are the adjustable 41 mm inverted telescopic Showa forks which have a long suspension travel. The right fork comes with adjustable rebound damping while the left fork comes with adjustable preload to increase the confidence of the rider to tackle any terrain.  On the rear, the KYB single-shock offers remote spring preload adjustability which can be tuned to soft and hard according to the rider’s preference. With the proper adjustments of front windscreen, front forks and rear shocks according to the rider, this tourer surely doesn’t fails to impress the rider and always keeps him/her calm and comfortable. In the brakes department, on the front are the dual semi-floating 300 mm petal discs and on the rear is a single 250 mm petal disc brake with Nissin block calipers on both front and rear and both the brakes are combined with a crisp and linear ABS braking system for overall good braking performance. ABS on front and rear is offered as standard on this bike. What matters to me is the cornering capability of a motorcycle. The Versys being a tourer I wasn’t much very sure about its cornering capabilities and so I had to put it through the test and I took it to the ghats of Lavasa, no other better place can be found to test the cornering capabilities of a motorcycle. With proper precautions taken, cornering tests were done and this bike completely left me amazed with its cornering capabilities. Tight turns and fast corners, all of them were tackled by this tourer amazingly. It was perfectly stable at corners even at speeds of 100+ km/h. The ABS, the brakes and the suspensions impressed me a lot. The front 120/70Z R17 M/C (58W) and rear 160/60Z R17M/C (69W) tyres provided ample of grip. They were capable of going off-road and tackling the dirt tracks too was an easy task. There is no traction control on this motorcycle, but to tell you honestly, it’s not needed at all. The 170 mm of ground clearance just lets this bike go anywhere it wants to. 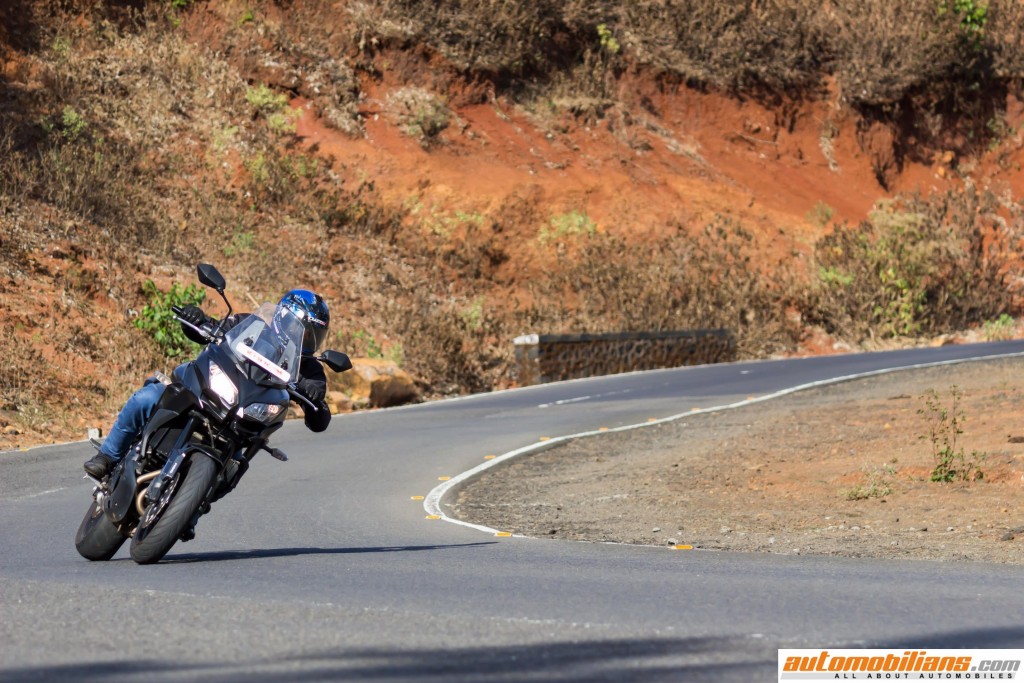 Its Verdict/Conclusion: This big and bulky Versys 650 ABS ticks all the right boxes for me. It looks smart and has aggressive looks which are very distinctive. The bike has nice split suspension setups and solid brakes with an ABS braking system. It is capable of taking you to new places and exploring new places on this machine is itself a great happiness. It will always make you smile with its performance. Kawasaki has got this bike in the Indian market at the perfect timing where all the serious adventure tourers were focusing on the middle-weight touring motorcycle. It can run smoothly on the tarmac, it can conquer any terrain and it can also corner, thanks to its split Showa and KYB suspensions though. It excels in the terms of comfort and reliability. It will keep going on and on and you can continuously keep riding it for hours as it offers extreme comfort and refinement. There are no vibrations too. This Kawasaki Versys 650 ABS is a very dependable and reliable motorcycle in the middle-weight segment. There are many aftermarket accessories available for this bike, opt for them if you wish to. 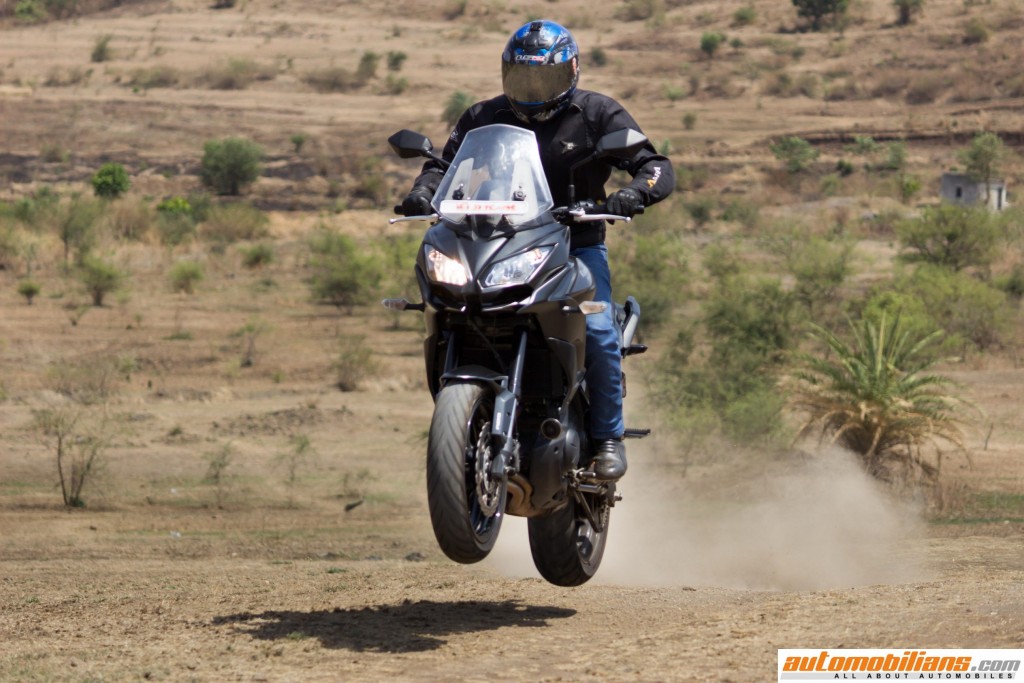 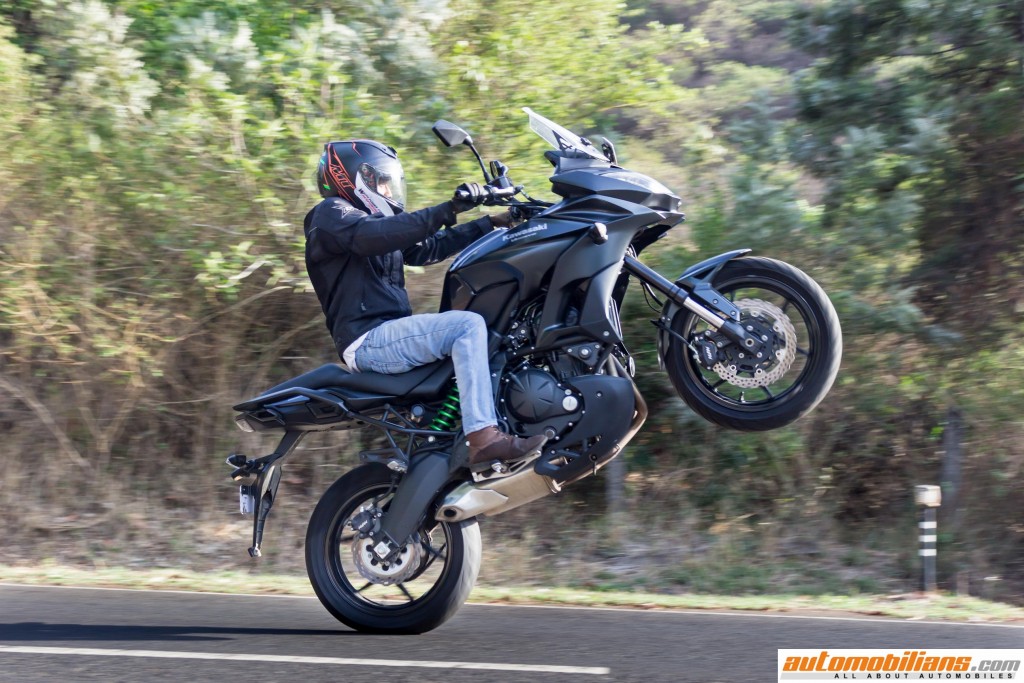 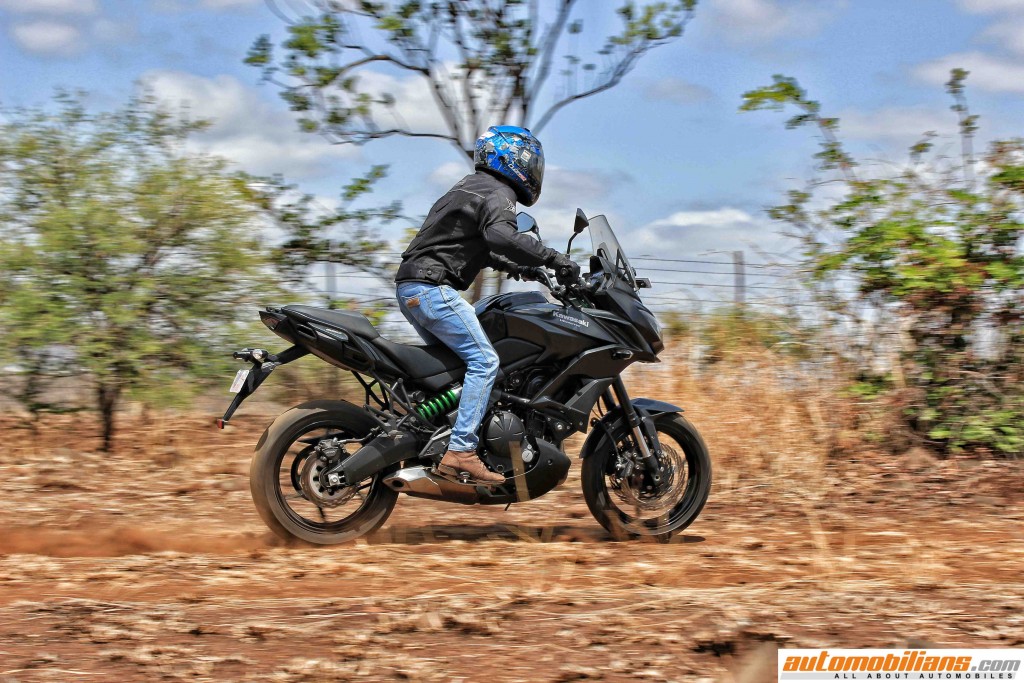