The Range Rover Evoque has been in production since 2011. It is a compact luxury SUV produced by the British automaker – Jaguar Land Rover, a subsidiary of Tata Motors. It was first showcased at North American International Auto Show in January 2008, and now it has entered into its second-generation. No doubt it looks very similar to the Range Rover Velar, but the Evoque has an enormous fanbase of its own. Nonetheless, the Evoque has always been a head-turner but now let’s see what the new-gen Evoque is all about and if it still carries the original’s charm! 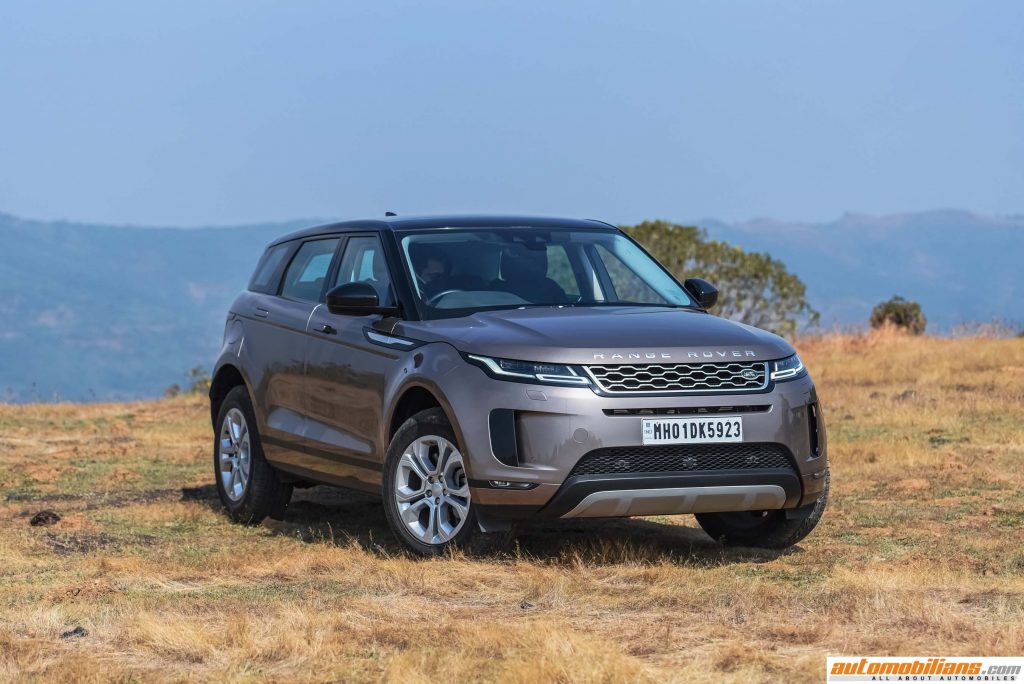 Exterior Design: The new-gen’s predecessor transformed the world of compact SUVs upon its debut. It changed the company’s image of making alpha SUVs only. This second-gen Evoque is all-new and is the first car to use the new Premium Transverse Architecture (PTA), which has led to an increase in its dimensions. It has also witnessed a growth in water wading depth by 100mm, which now makes it 600mm. The new Evoque borrows its design cues from its elder sibling, Velar. And both these masterpieces are designed by the same person, Gerry McGovern, the Design Director at Land Rover. On the front, this baby-Velar gets slightly upswept LED headlights with LED DRLs. There is an extra slat under its front grille like its predecessor. It does look confident when seen from the front. The side profile gets an aggressive sloping roofline that ends with a spoiler which depicts a coupe-like silhouette. At the rear, there is no much difference between both of them. Overall, the Evoque looks bold and handsome, and its fewer lines and cleaner surfaces form a sweet harmony. 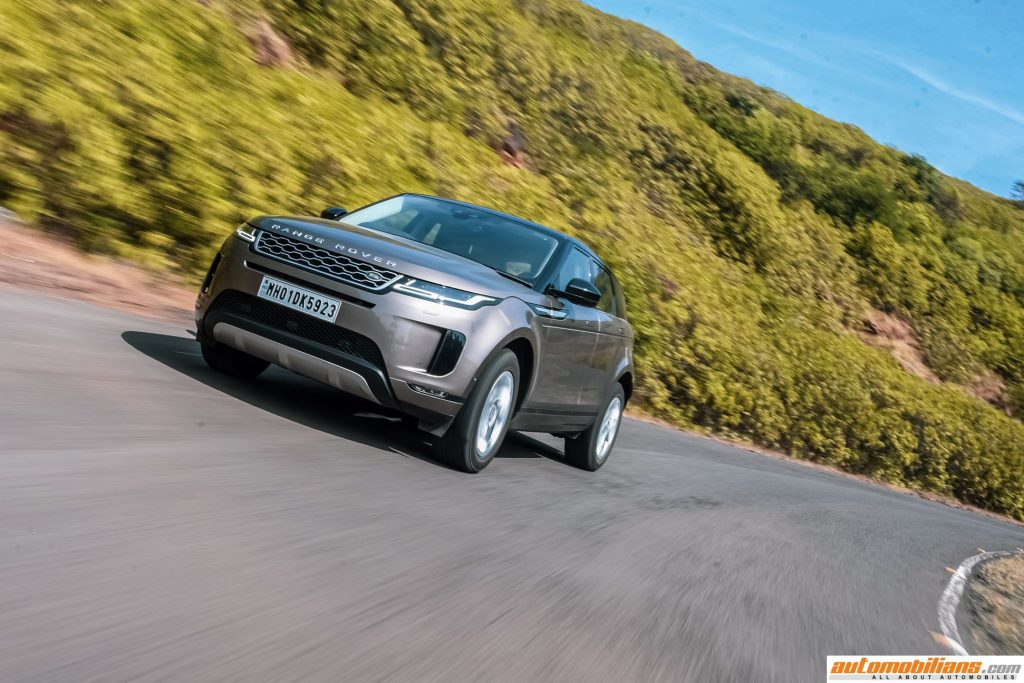 Interior Design: You enter the cabin with the help of flush deployable door handles. The cabin is new and fresh, but it shares much of it with the Velar and other Range Rovers. There are premium materials everywhere inside. The soft upper dash has almost zero reflection on the windscreen which is great. Also, it gets the new Range Rover steering wheel, which incorporates feather-touch controls. Since our test car was an entry-level S-trim, you won’t get to see the company’s new Touch Pro Duo, 10-inch touchscreen and digital dials on this one. The placement angle of the single 10-inch infotainment system is slightly off as sometimes it becomes difficult to press the bottom controls. Its lower panel is touch-sensitive and has rotary knobs for climate control. The driver’s side climate control knob also doubles up as the Terrain Response 2 selector upon pressing. Some of the standard features are dual-zone automatic climate control, 10-way power-adjustable front seats, and ambient interior lighting. There is grained leather almost everywhere. The seats are comfy, and the driver’s seat offers a great view of what is ahead. A conventional gear lever has replaced the old rotary gear knob in this model. The back seat feels a bit confined even though the legroom is increased by 20mm. There is a fixed panoramic sunroof too and a powered tailgate for added convenience. Overall, the whole layout seems neat and clean, but the new Evoque is best-enjoyed from the driver’s seat. 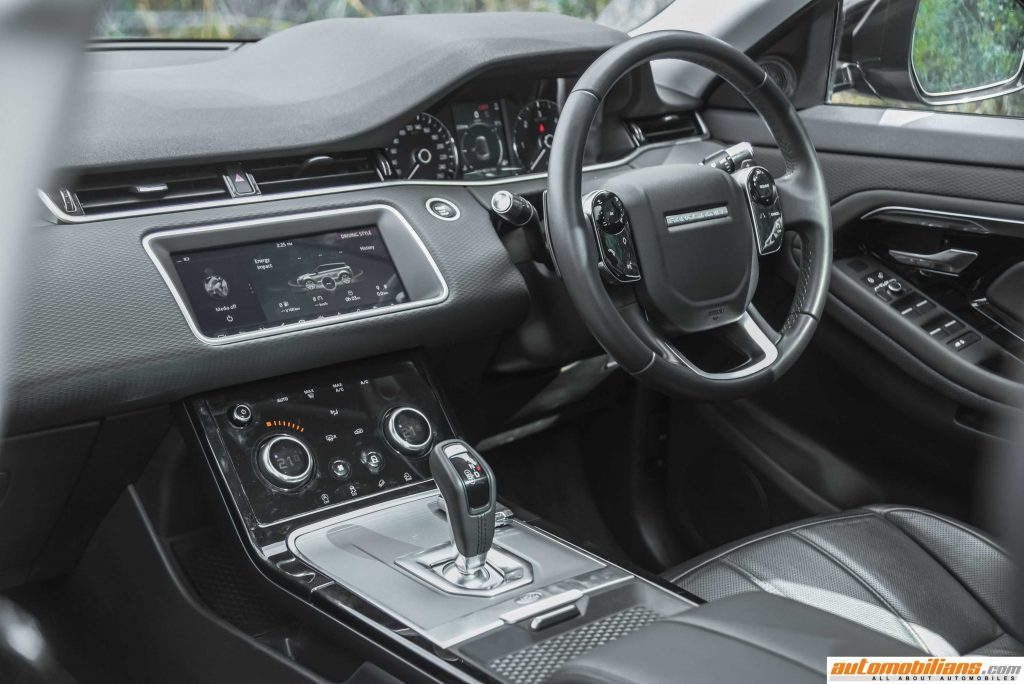 Engine & Performance: Our test vehicle featured a diesel engine, but you can have the new Evoque with a choice of 2L petrol and diesel engines. Speaking about our test car, the D180 variant, it got a BS-VI compliant, 2L, 4-cylinder, diesel engine that churned out 177 BHP @ 4000 rpm and maximum torque of 430 @ 1750-2500 rpm. It is the same engine that powers the new Jaguar XE. The power delivery from the motor is calm. 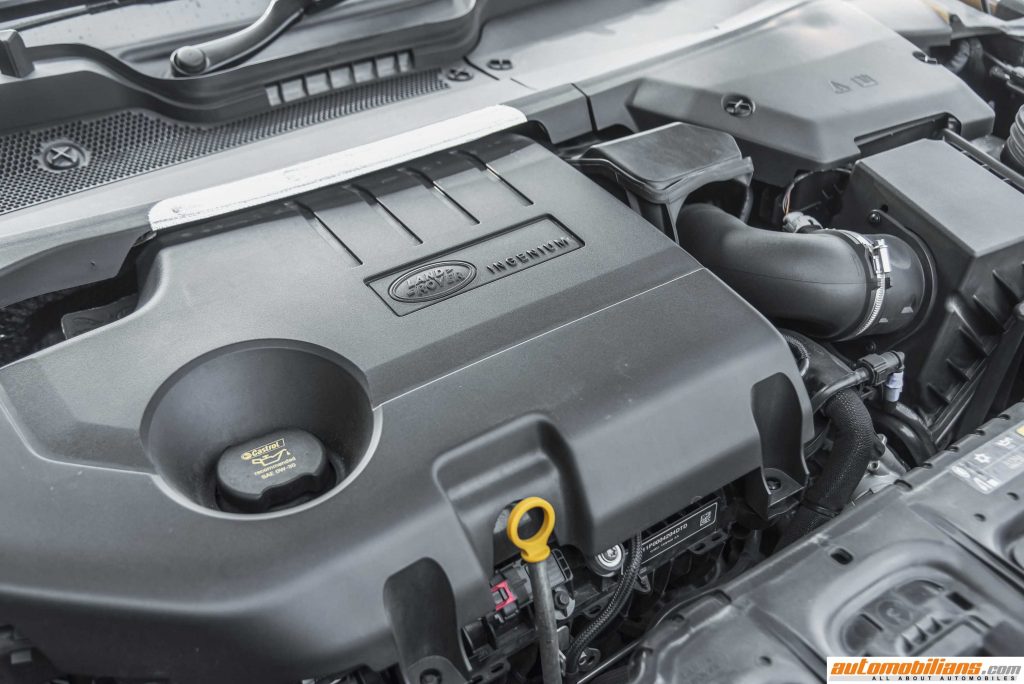 The engine is mated to a 9-speed automatic transmission. The gear shifts happen smoothly, and in manual mode, urgency during upshifts can be felt. The automatic start/stop does bring the car to life with a shudder, which is not so welcoming, but the Evoque pulls away linearly. The 9-speed transmission is standard on all variants, so is the AWD system. It has a claimed top speed of 205 km/h and goes from 0 to 100 km/h in 9.3 seconds. The motor feels relaxed while cruising on the highway, and the 100 km/h speed is maintained under 1900 rpm. It returned a mileage of close to 15 km/l on the highway, which dropped down below 10km/l in the city. 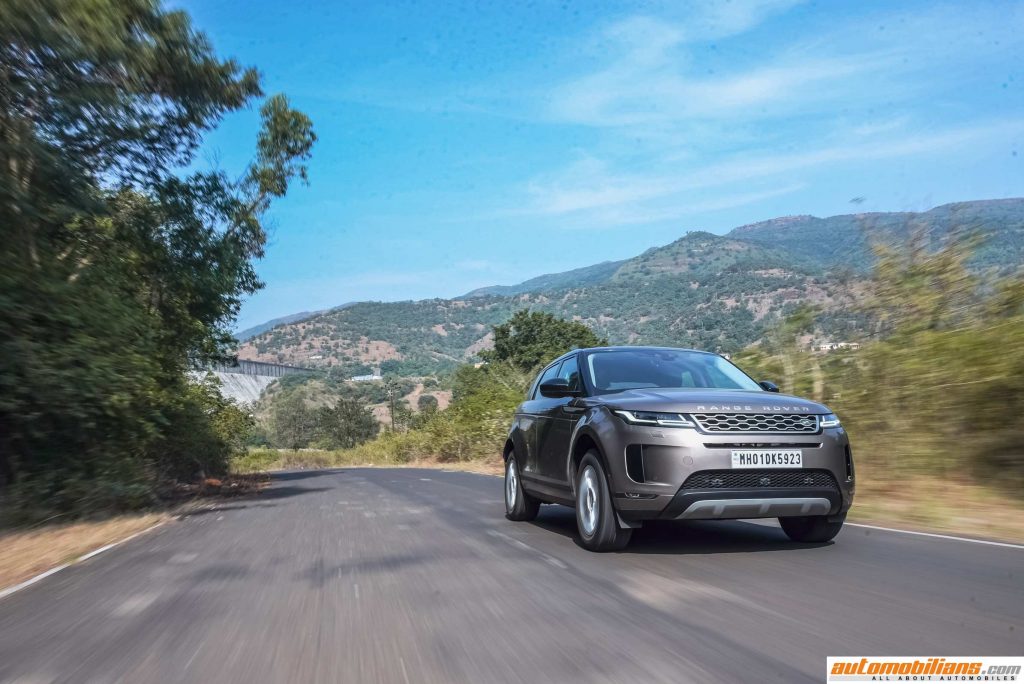 Driving Dynamics: The first-gen Evoque’s driving dynamics were phenomenal, and the new-gen Evoque does justice to it. It is a nimble handler. The car’s compact size, electric steering and bigger wheels offer excellent grip on the road as well as off-road and also helps you to manoeuvre quickly. The steering weighs up as the speed climbs, which also increases your confidence. The ride quality is better than the previous generation but is still on the firm side. It goes smoothly over potholes and bumps, thanks to its new passive suspensions at both front and rear. The car feels planted at highway speeds, and the cabin refinement is outstanding. It is good at off-roading too (not suitable for extreme off-roading), after all, it wears the Range Rover badge. It has a ground clearance of 212mm, an approach angle of 22.2°, and a departure angle of 30.6° proved out to be great during our short off-road test. The old-gen Evoque was good at driving, but this is even better and surely does not fail to do justice to its legacy. 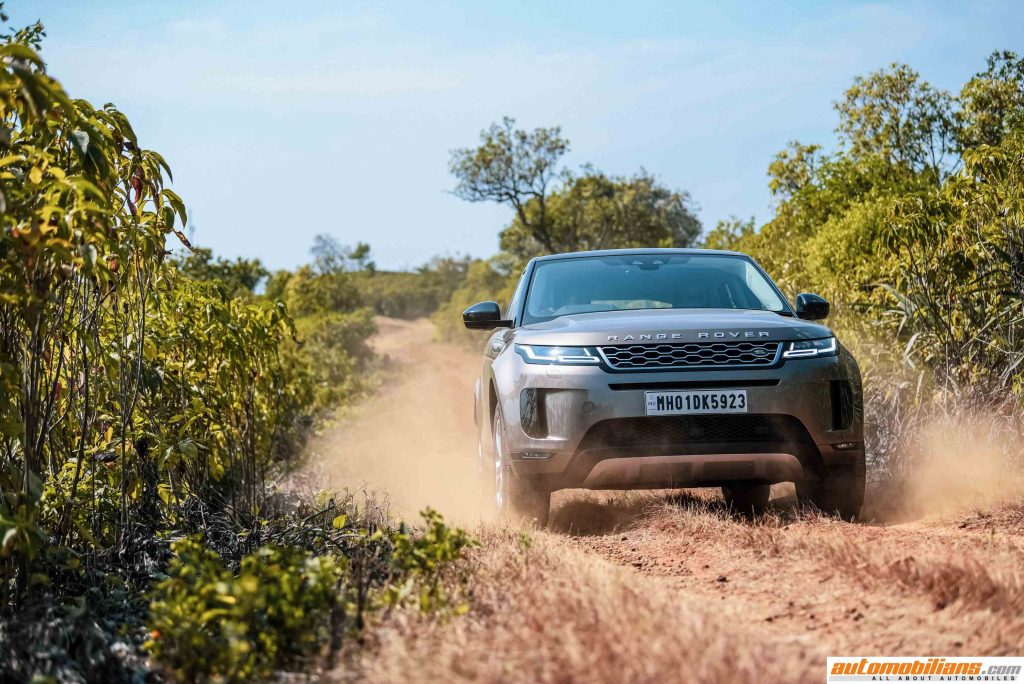 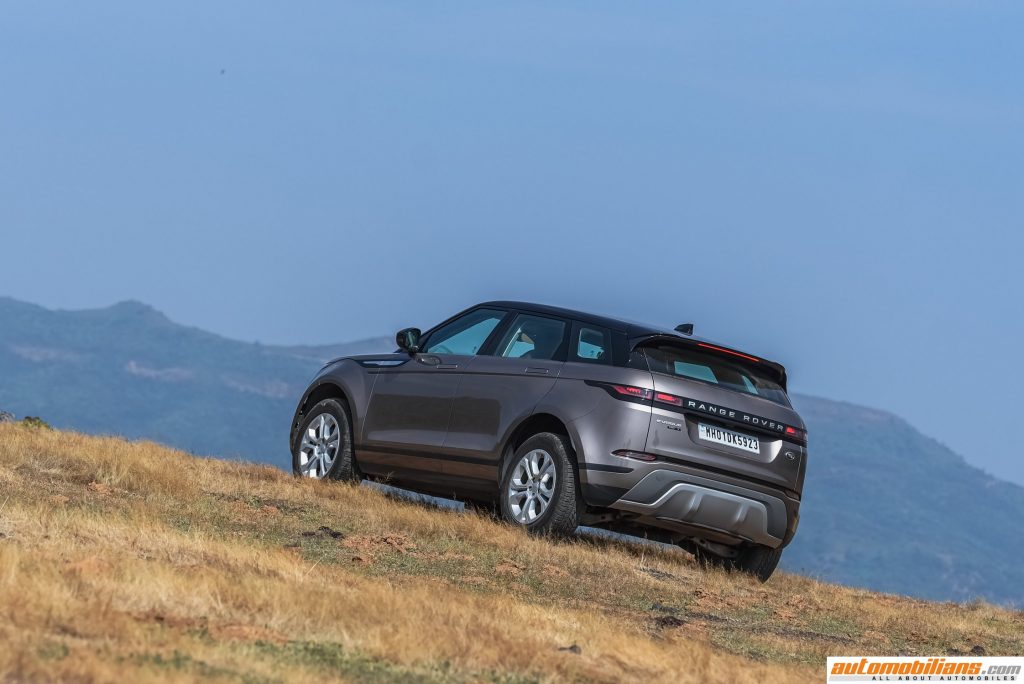 Verdict: The second-generation Evoque has a pretty face and classy interiors. Its design is good to get you emotionally engaged with it. It is for those who have been there and done that and not for the ones who think size and price are directly proportional. The Evoque is a luxury compact SUV with the looks of the Velar. It is a good pick for those who want a nimble handler and those who don’t care much about the extra space. The ride quality is good, and it performs well too. The new Evoque loses a little on its own identity now as it looks similar to the Velar, but with the safety features and driving capabilities on both asphalt and gravel, it proves that it is a traditional Range Rover in a smaller package. 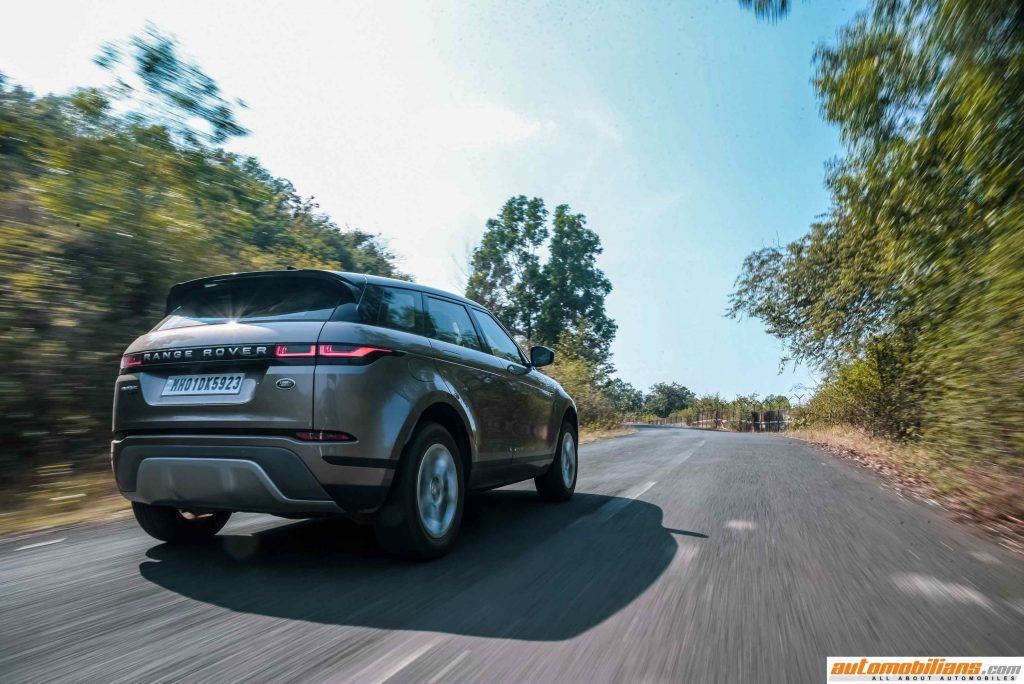 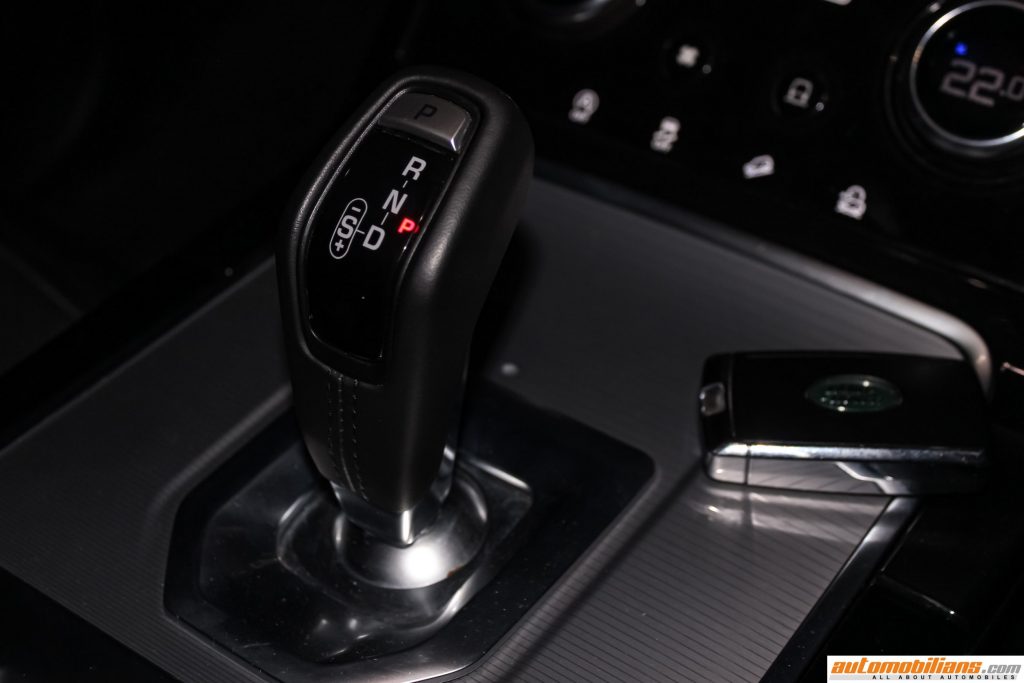 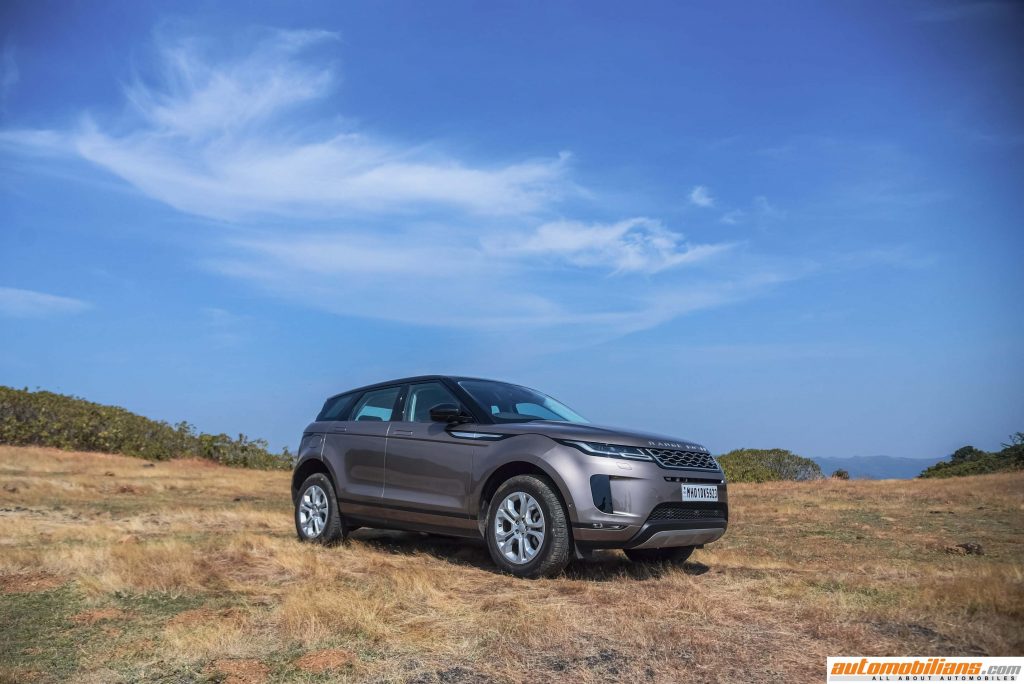