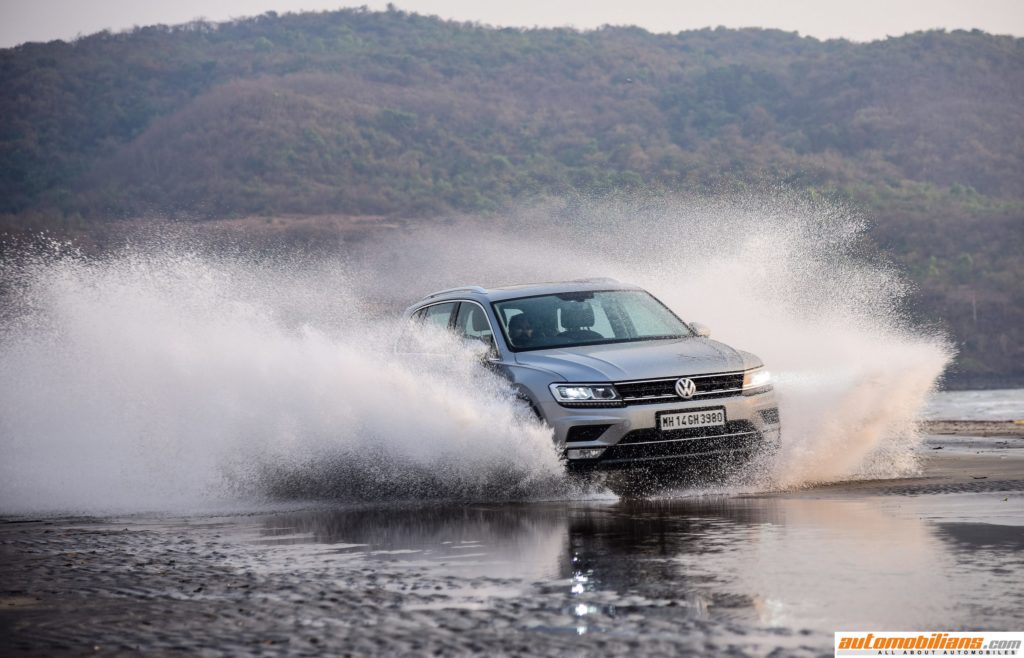 The Volkswagen Tiguan made its first debut at the LA Auto Show in 2006 as a concept car and in 2007 its production form was introduced as a compact crossover vehicle at the 2007 International Motor Show Germany. The first generation Tiguan was built on the PQ35 platform of the VW Golf, and it featured two-row seats and a transverse mounted 4-cylinder engine. Later on, in 2011 it was facelifted and then the second generation Tiguan was unveiled at the 2015 Internationale Automobil-Ausstellung (IAA – International Automobile Exhibition). And thereafter the car was launched in India a few months back. It is also VW’s first car in India to be based on the MQB platform and it’s also the first car, to get an all-wheel-drive system as standard. The car is assembled in India as it comes in as a CKD model. The car comes in two variants, the Comfortline and Highline, and we got to put our hands on the Highline trim.

Exterior Design: At its first glance, you will immediately notice the typical German styling on this car. The Tiguan does not get an aggressive styling instead it gets a very clean and decent styling which grows on you with time. The exterior is made up of entirely straight lines. The bonnet boasts characteristic lines as well. The front fascia of this car is actually borrowed from the new-generation Passat and Golf. The big and sleek design of the LED headlight looks attractive while the LED taillights (available on the Highline trim only) simply look amazing as they feature small triangular LED lights. The shoulder line is thick and flows into its taillights. The 18-inch alloys on this variant look outstanding. The Highline trim gets more chrome treatment than the Comfortline trim which makes the car look more appealing and premium. Of course, the new Tiguan looks more attractive than the first generation model and the new Tiguan has grown bigger in size than the older one. Though it has grown bigger in size, it still manages to stay compact in every way. The large wheel arches with short overhangs, aluminium-finished silver roof rails and matte claddings on the lower side of the car’s body add up to the overall rugged look of the car. Overall, the new Tiguan looks attractive and more like a crossover than an SUV. It carries a well-balanced sleek and rugged look at the same time. 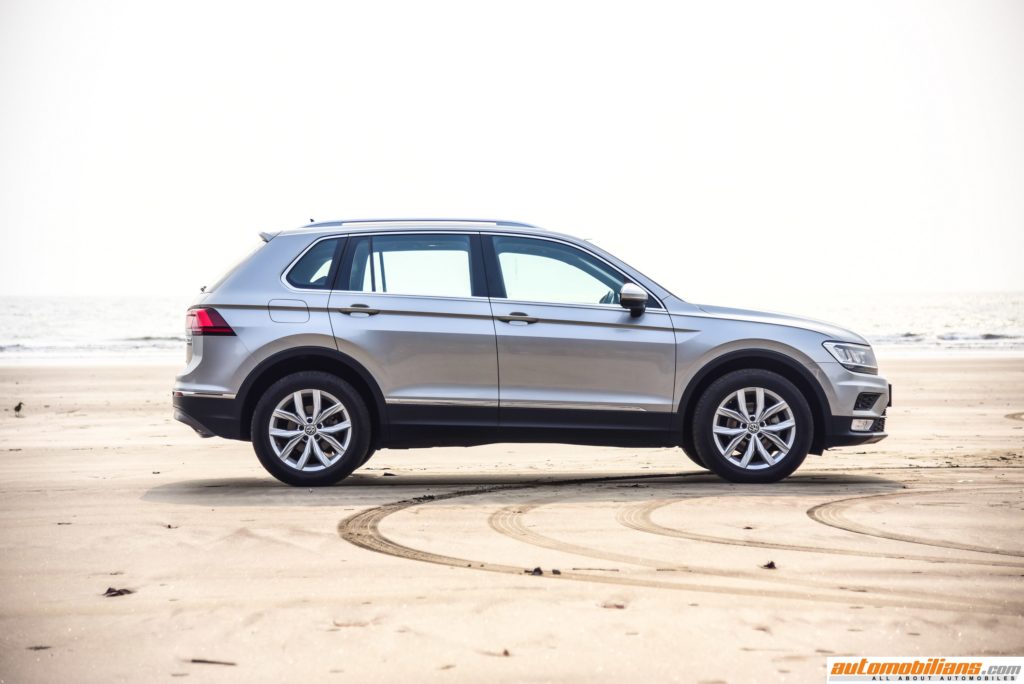 Interior Design: The interior is something that shows VW’s solid build quality and a lot of techs. As soon as you get into the car, you get a very premium feeling. The interiors get the all-black treatment with chrome highlights. The interiors do get an angular design that complements its exterior design. The driver’s seat has a commanding position and the flat-bottomed steering wheel adds up to sportiness. The cabin’s layout is spacious and it is that of a sedan. The instrument cluster shows all information and the steering controls and the rest other controls are well ergonomically placed. Everything is in perfect reach and the fit and finish and the quality of materials are top-notch. The LED ambient lighting which comes into play at night is spot on. In terms of techs equipped in this car include the automatic LED headlights, rain sensing wipers (automatic wipers), cruise control, an electronic parking brake, auto hold, three-zone climate control, paddle shifters, an electric driver’s seat with memory function, heated front seats, a big 12.3-inch touchscreen that features Android Auto, Apple CarPlay and MirrorLink connectivity, push-button start/stop and easy open/close boot and the list goes on. The main highlight of its interiors is the panoramic sunroof. It is big and wide that gives you the view of the beautiful sky above. It is lined with LED ambient lights that make it look more graceful. The seats are finished in Vienna leather. The front passenger seat isn’t electrically adjustable but gets height adjustability. The rear seats offer a great amount of headroom and legroom, but they are placed a bit lower. Maybe placing the seats a little higher would have done the job of allowing you to see out properly without any stress. The rear seats get a split ratio of 60:40 and they can be reclined and slid backwards and forwards so as to allow you to access to more amount of boot space. But you really won’t need to fold the seats always as the car already offers a large 615 litres of boot space. And if you fold the seats, you will be able to use 1655 litres of boot space. And yes, there is a space-saver spare wheel which you wouldn’t have to use much as the tyres of this car contain a self-sealing gel which fills up small cuts and punctures on their own. The interiors of this car are plush, comfortable and also give you that feeling of premium class. 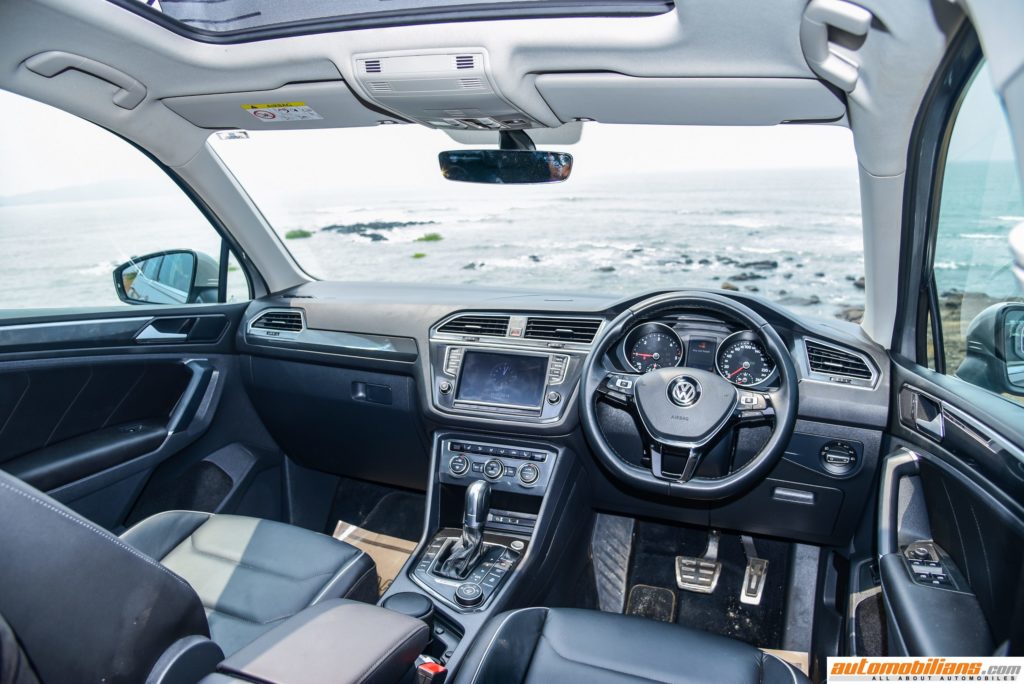 Engine & Performance: The Volkswagen Tiguan is powered by a 2L, turbocharged, diesel engine, and it is the only engine that is offered in the Indian market for both the variants. It produces 141 BHP @ 4000 rpm and peak torque of 340 Nm @ 1750-2750 rpm. The engine is mated to a 7-speed DSG automatic transmission and 4Motion all-wheel-drive system. This engine is an EA288 diesel motor which is VW’s new generation powertrain and so is the DQ500 gearbox, so you don’t need to worry about those emission and transmission issues anymore. 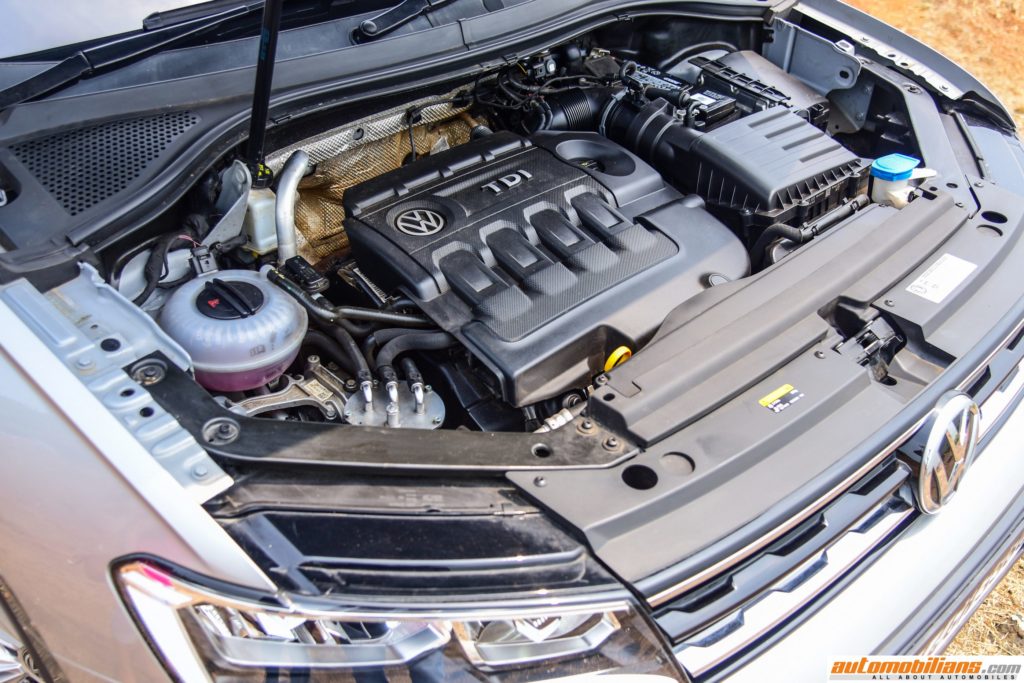 On the startup, the car makes a low rumbling sound and then settles down to a quiet idle. This is a well-refined engine and also the gearbox is quick, in fact, it is one of the finest automatic gearboxes that are on sale in India. It is quick in getting the car move from a complete standstill and the power delivery is linear.  The power delivery is all excellent up to 4500 rpm and if acceleration is that all you need then this is the car for you. The car achieves the three-digit speed effortlessly and it cruises at 100 km/h in the top gear at 1500 rpm, making the cabin to be a very calm place to be in. You also get different driving modes to have a more loveable ride. Normal, Snow, Offroad and Offroad Individual are the four driving modes which can be selected through the Drive Mode Selector. The Eco and Sport modes can be chosen from the Normal mode and the engine even decouples itself from the gearbox when you’re cruising without much power input to help in increasing the fuel efficiency in the Eco mode. In the Off-road Individual mode, you can customize the settings of everything that the Normal, Sport and Eco modes offer according to your preferences. You can choose from a lot of options in fact. The NVH levels are kept in proper check but as you start building up on speeds there is a little bit of engine noise that starts creeping into the cabin. But nonetheless, the car still impresses us with its healthy performance. 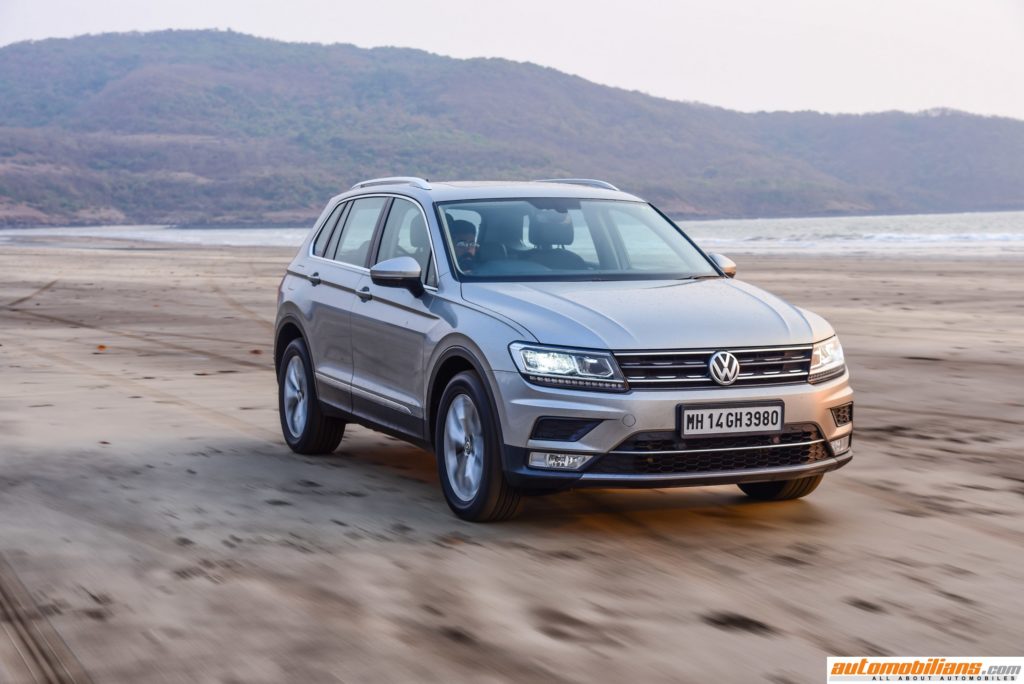 Driving Dynamics: From behind its wheel you get a good view of the road ahead and also of the surroundings. The electromechanical steering is soft and quick. But on the highways, it feels a bit heavier. The hilly areas are the most fun to drive places in this car. It remains planted as its 235/55 R18 tyres provide a lot of grips and also the brakes have a very good bite. The car being taller in height doesn’t sway or roll a lot around bends. The car’s ground clearance is of only 149mm which is less for an SUV. You can cruise confidently at higher speeds as the suspensions of this car are on a little softer side. They gobble up bumps with an ease and do not unsettle the passengers inside the car even on the rough roads. The car rolls smoothly on the tarmac and it also performs well on the rough roads. The AWD system works perfectly fine and so does its cruise control. Though this car isn’t a hardcore offroader, it will still leave you amazed with its offroading skills. It is an enjoyable car to drive in cities and on highways as it has a good suspension setup, good brakes and good driving dynamics. 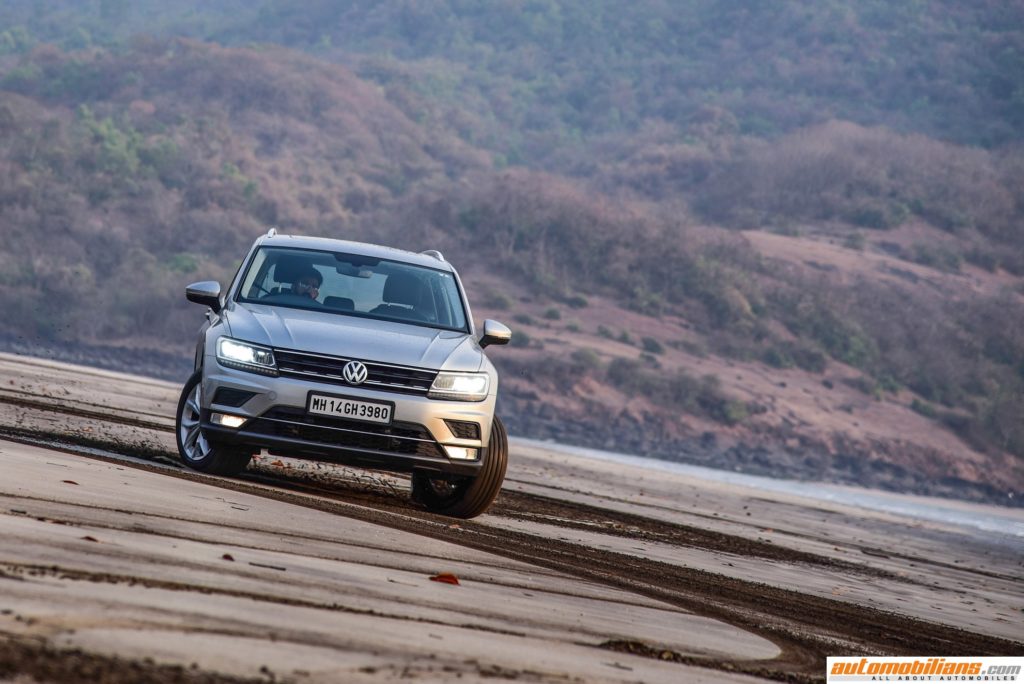 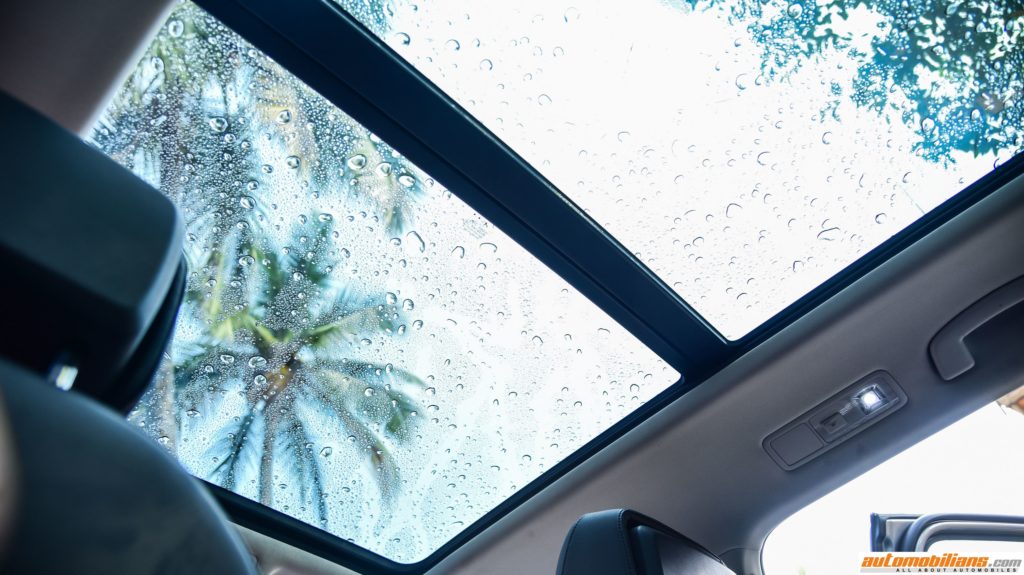 Verdict/Conclusion: The VW doesn’t boast an imposing stance like an SUV but instead gets a decent and attractive design language. It is a bit over-priced car for its size but does not let you down in terms of quality and premium feels. The car for sure offers a long list of features, a great and comfortable cabin, refined diesel engine and a good ride quality but still gets a price difference of almost 3.5 lakhs in both of its variants. It also offers great space for 5 people and also for a lot of luggage. With all those techs and features and quality of the materials, it impresses us in that luxury segment of cars. It is a very practical car and overall makes for a good package. Though it asks you for a lot of money but good things do not come cheap right? and it makes more sense to buy quality instead of saving money. So, the Tiguan is one of the best luxury SUVs and it should be on your list for sure and also you should go and get its test drive at your nearest VW dealership. 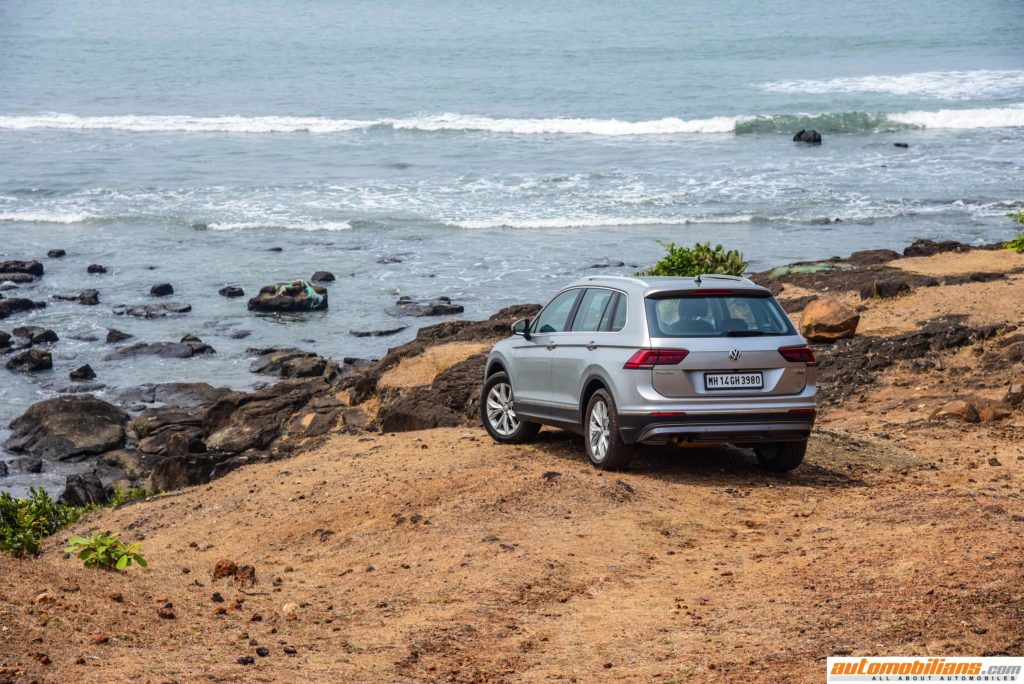 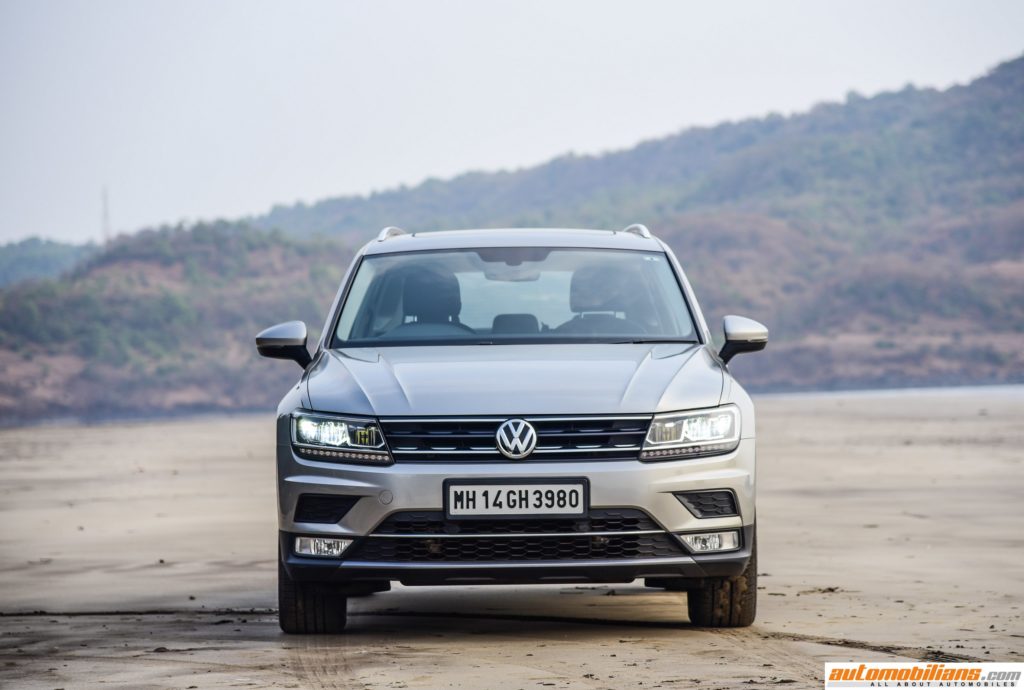