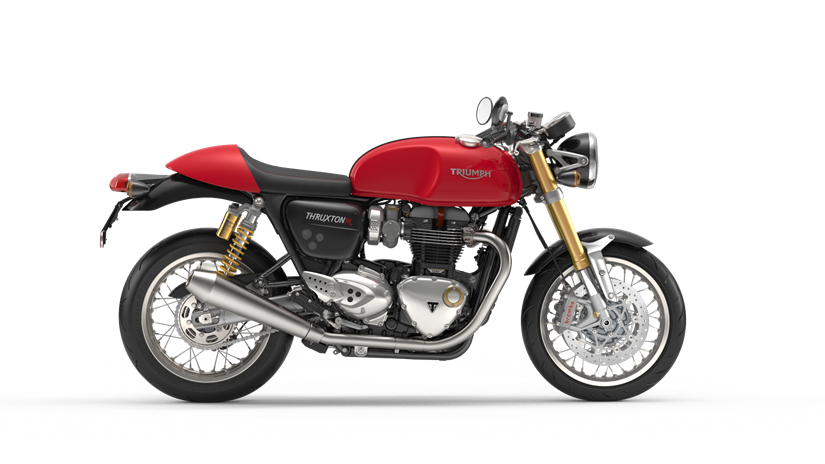 The Modern Classics’ range of Triumph motorcycles has a huge fan following because of their spectacular looks and performance. The new Thruxton R gets added up in this range.

The new Thruxton R is powered by a 1200cc, 8V, parallel twin engine which is mated to a 6-speed gearbox. This engine produces 97 BHP of power @ 6750 rpm and 112 Nm of torque @ 4950 rpm. The bike also gets new 2 into 2 exhausts with chrome silencers. This new engine makes it the ultimate cafe racer, according to the company.

The bike is feature rich and comes with a number of modern features like – ride-by-wire throttle, different rider modes, switchable ABS, switchable traction control, slip assist clutch, engine immobilizer, LED DRl headlight and LED tailight. The front brakes are the twin-floating Brembo discs with Brembo master cylinder and a single Brembo disc at the rear. There are the fully-adjustable Showa forks suspensions at the front and fully-adjustable Ohlins twin shock absorbers at the rear.

The company is also offering many customization options such as the Track Racer Inspiration Kit which consists of a sculpted cockpit fairing, lower clip-on handlebars, rear mudguard removal kit, Vance and Hines slip-on silencers and a leather tank strap. The other kit is the Cafe Racer Inspiration kit which comes with rear mudguard removal kit, Vance and Hines exhausts, Signature Triumph rubber knee pads and a leather tank strap. Performance Race Kit, another kit is also on offer which boasts up the performance figures of the Triumph Thruxton R.