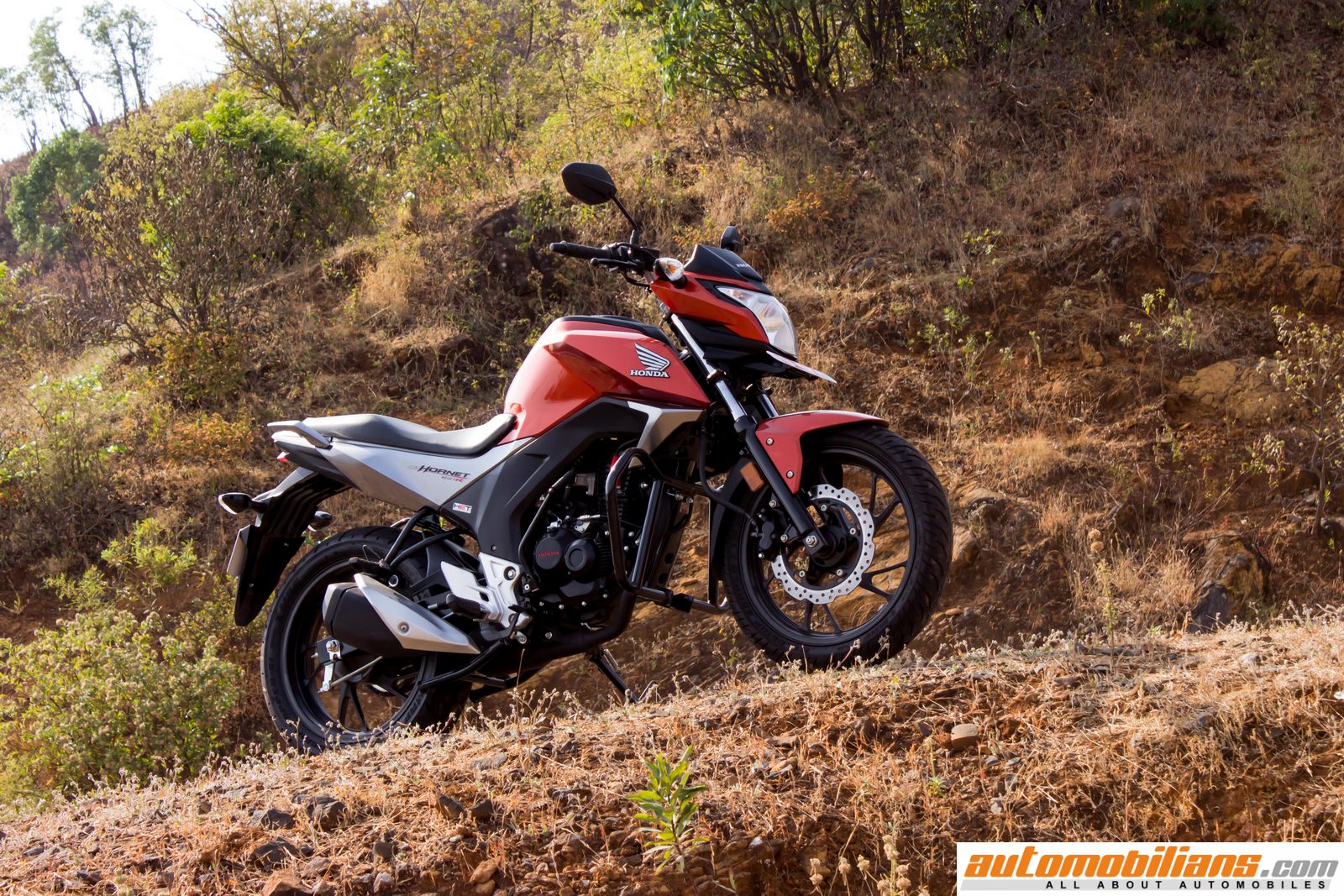 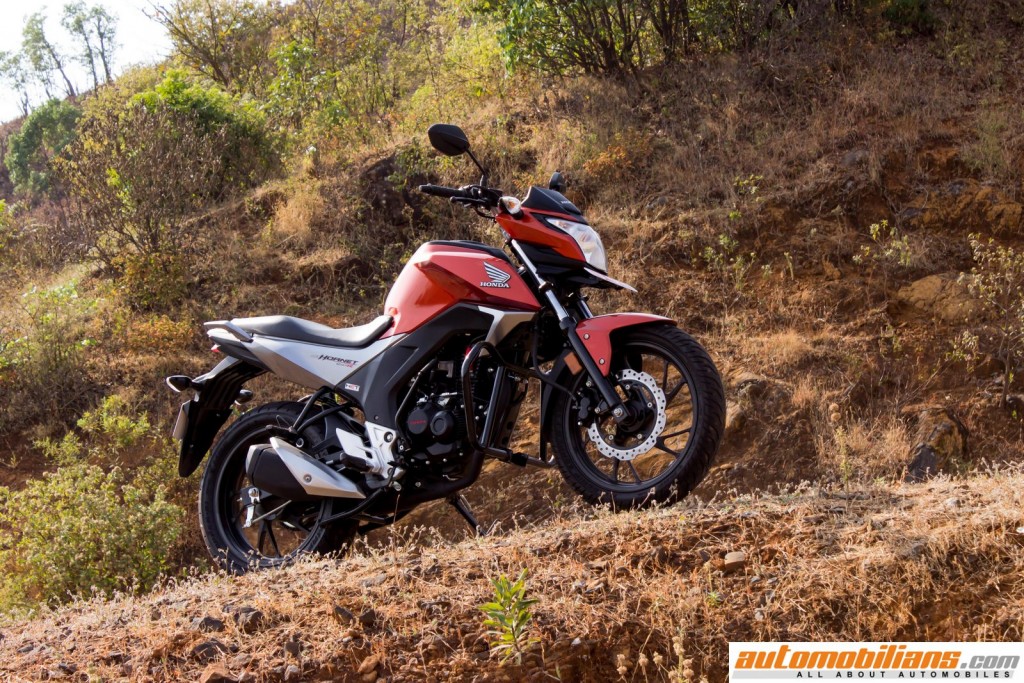 Its Styling: The Honda CB Hornet 160R gets its design and styling cues inspired from the Honda’s concept motorcycle, the CX-01 which was showcased at the Auto Expo in the year 2014. The Hornet looks aggressive and sporty with those muscular tank shrouds and the tank is well chiseled and scooped from every angle and the tank also gets a center piece of carbon-fiber lookalike plastic cladding. The rear ‘X’ shaped LED taillight looks neatly done and is an eye candy. On the front, the headlight’s design is quite similar to the CX-01 and the 5-spoke alloys are completely new. The mid-ship muffler design of this motorcycle is something more attractive and the overall design of this motorcycle makes it look more appealing and is an easy eye-catcher in the crowd. 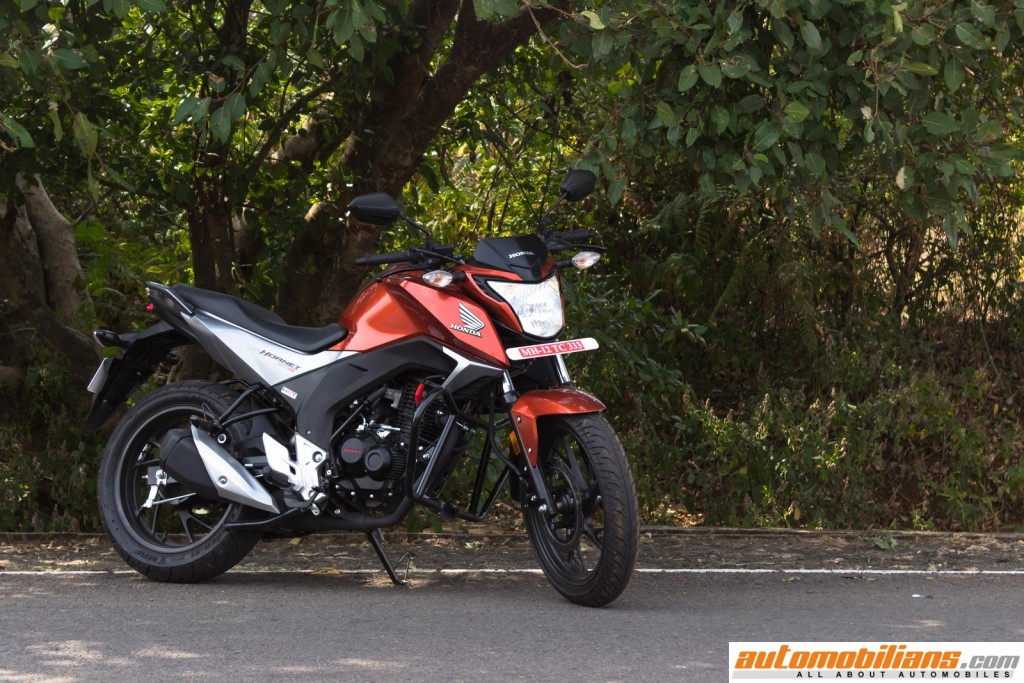 Its Switchgear and Instrument Cluster: The switchgear isn’t any new at all. It is carried from the CB Unicorn 160 and it still misses out on an engine kill switch. That’s a bit disappointing though. The Instrument Cluster also isn’t any new addition. It is the same as that of the Unicorn 160. It is placed a little lower which makes the rider to view it more easily and the instrument cluster hosts everything, the trip meters, the fuel gauge, the tachometer, the time and the speedometer. The instrument cluster is a fully digital meter and it has an amber back lit. 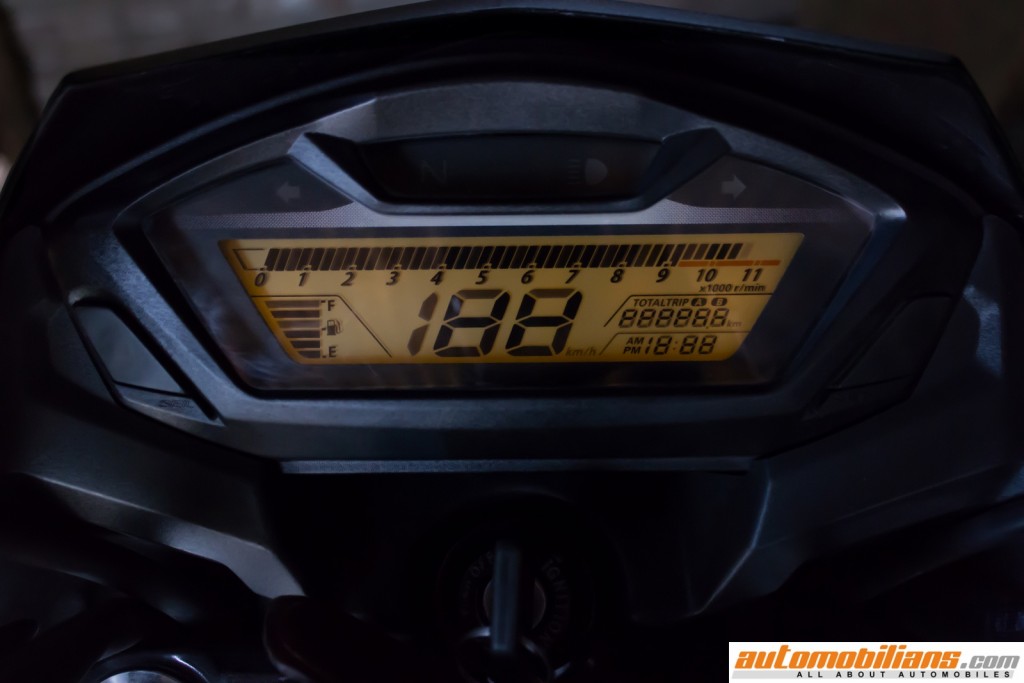 Its Ergonomics: The saddle of this motorcycle is a single piece unit and the pillion region is little raised up. The bike is a sports commuter with an upright seating position. The handlebar is straight and wide and the center foot pegs add up to that upright seating stance. The seat is very comfortable and the tank fits in the legs of the rider properly and there is a proper thigh support too. The pillion seat, the pillion foot pegs are all comfortable. The pillion also gets a well chiseled grab rails and the saree guard does not irritates the pillion in any manner. The rider’s upright seating position does allow the rider to firmly plant his legs on the ground. 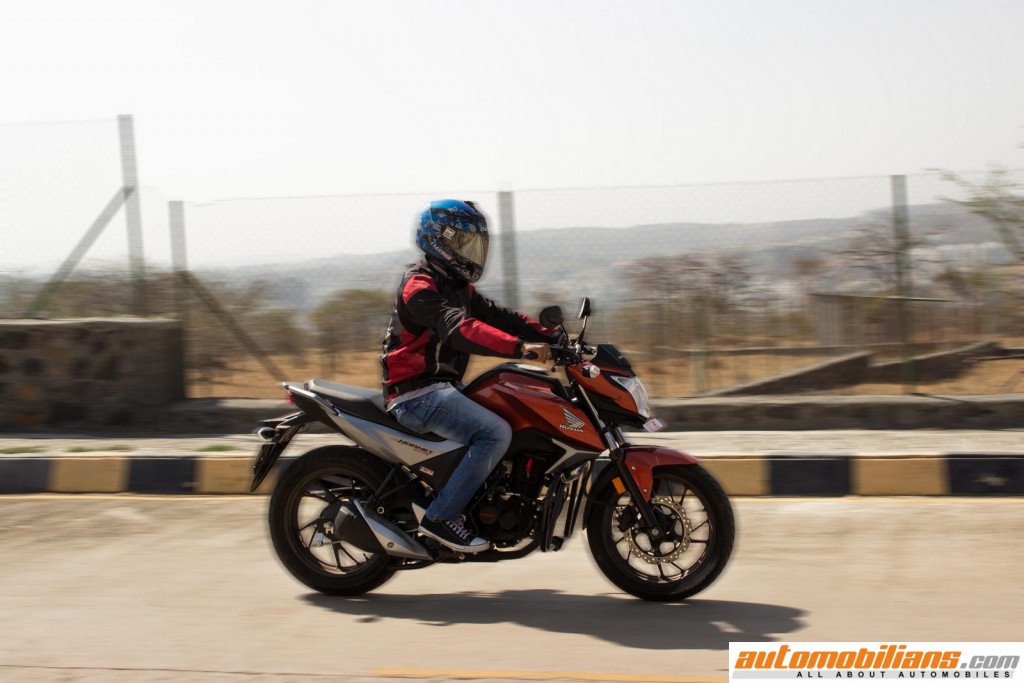 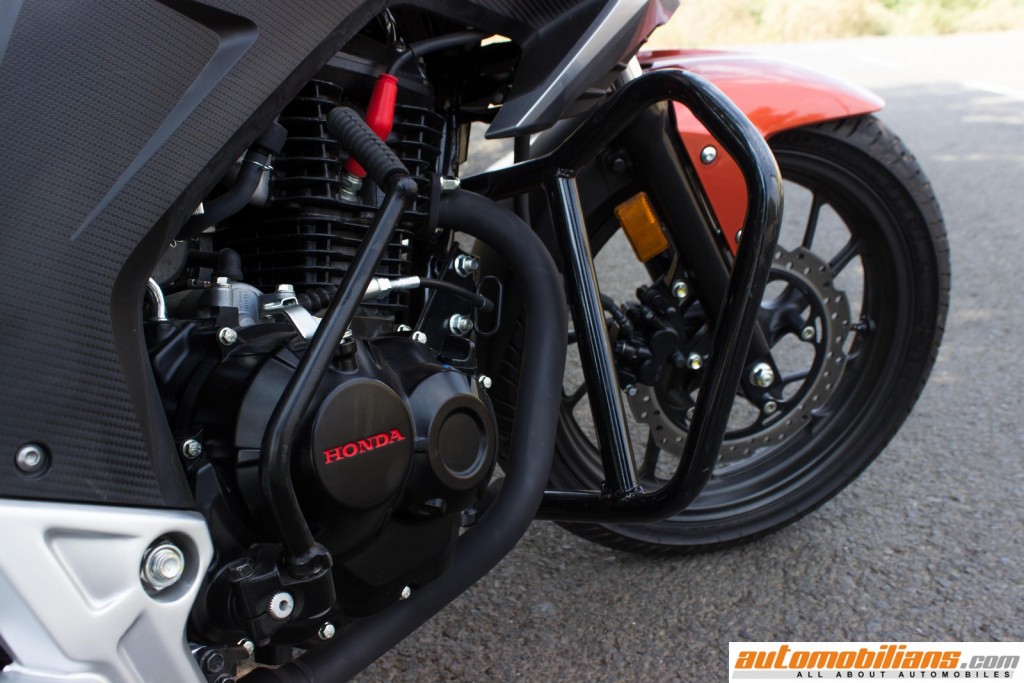 The powertrain of this motorcycle being the same as that of the CB Unicorn 160, is more powerful and more refined. The engine is more rider-friendly and its fun-zone lies past the 7000 rpm mark. The torque then hits in effectively and the motorcycle loves to redline quickly in every gear. The first three gears being tall require down-shifts while cruising through traffics. The fourth and fifth gears are short and help the bike to achieve a top-speed of 120 km/h on the speedo which is more than what the company claims. The 0-100km/h sprint is achieved in 16.20 seconds (VBox tested) and it could have been much faster if this motorcycle wasn’t equipped with a wider tyre on the rear. The late kick-in of the torque and power also disappoints in achieving a good 0-100 km/h sprint’s time.  The engine is refined and is smooth too but there is knocking like sound which irritates in every gear. But it’s a fun motorcycle to ride above 6000 rpm and has very minimal vibes on the move. The bike cruises normally on the three digit speeds but for that you won’t be able to extract much fuel efficiency from its 12 liters of fuel tank. Cruise normally in the city and on the highways; you will then be able to expect fuel efficiency between 45-50 km/l. The Honda has put in a catalytic converter in the motorcycle’s muffler to make the Hornet a BS-IV biddable whose emission levels will come into effect in the year 2017. 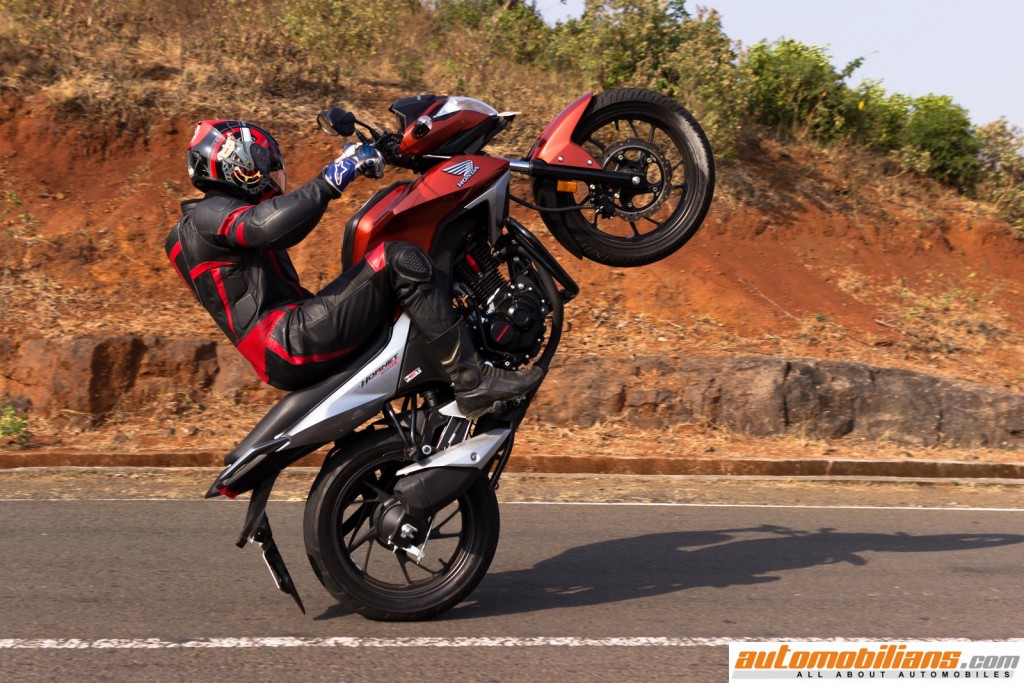 Its Riding Dynamics: The Hornet 160R has an upright seating posture with center set of foot pegs. It feels more relaxed and you can just cruise and cruise for miles and miles comfortably. The pillion too won’t complain much about his/her comfort or about any particular thing. The suspension setup is pretty nice and the potholes, the bumps or if any pebbles comes in your way, everything is soaked up well by the motorcycle’s front telescopic and rear monoshock suspensions. The bike barely unsettles in mid-corners. The bike which we tested was a STD variant so there was a petal disc brake on its font and a drum brake at its rear. The braking offers ample of stopping power and it remains stable because of its weight in every situation. Cornering on this motorcycle is fun too. It allows you to lean and those wide tyres offer lots of grip and the bike does remains stable. The riding position being upright, it takes a little time for you to balance while cornering. The wide and straight handlebar and that weight of the motorcycle helps you to maneuver the bike easily but in the congested traffic, the bike feels heavier and you also have to up-shift and down-shift while maneuvering it. The gear shifts are butter-smooth and they are precise and add up to the joy of riding this motorcycle. This bike also has a ground clearance of 164 mm which helps you to even fly over rough terrains. On the riding dynamics front, it is the suspension setup and its both rider and pillion comfort which impressed me more. 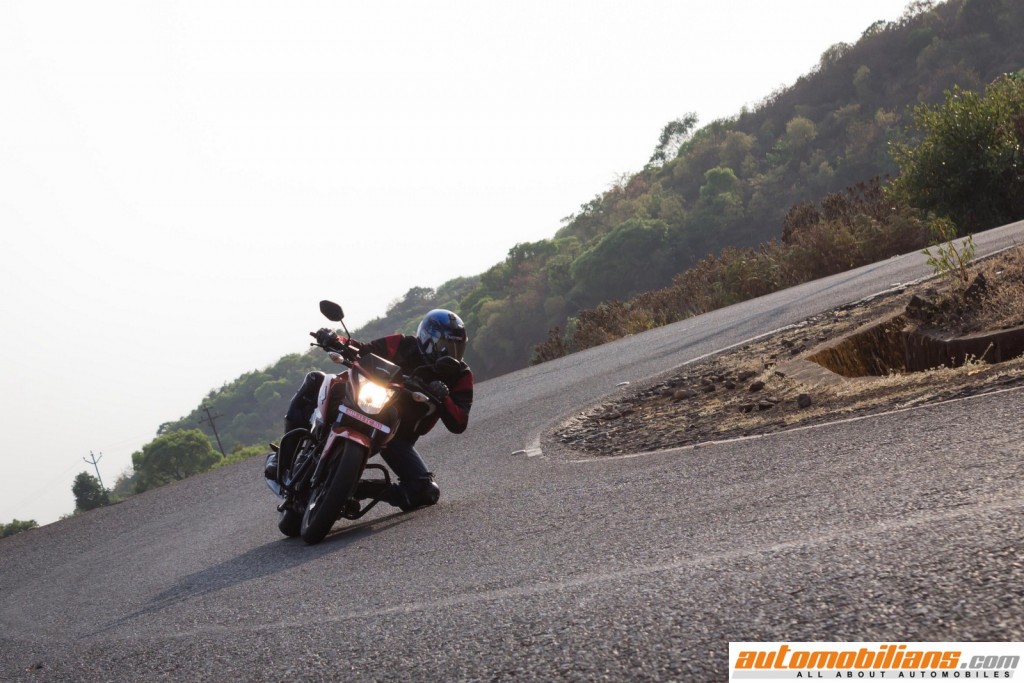 Its Verdict/Conclusion: The CB Hornet 160R is attractive and looks muscular too. Honda finally has a better looking and a better performing sports-commuter motorcycle which will attract or I should say it attracts the young riders who like the sporty naked bikes. The bike has a muscular body design, fatter tyres and of course the comfortable ergonomics. The exhaust note is not that nice but the engine is peppy and rev-friendly. The Hornet is not cheap and you need to pay an addition 5000/- for a rear disc brake with combined braking system. Nonetheless, the CB Hornet 160R with its sharper looks, refined and powerful engine, precise gearbox and joyous handling makes it the promising motorcycle to be offered by the Honda. 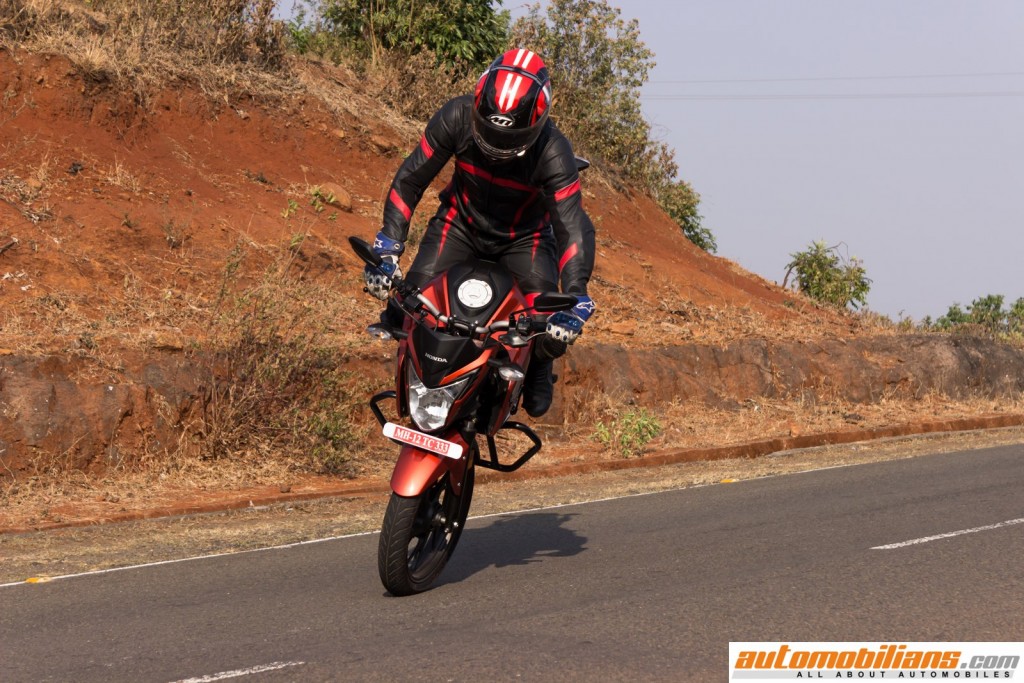 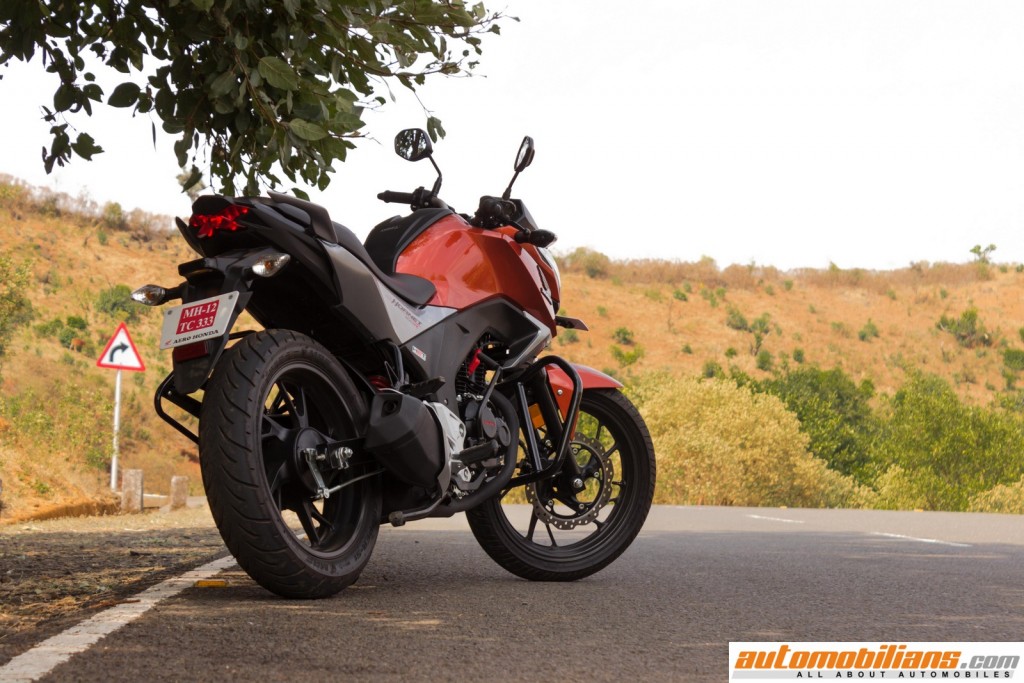 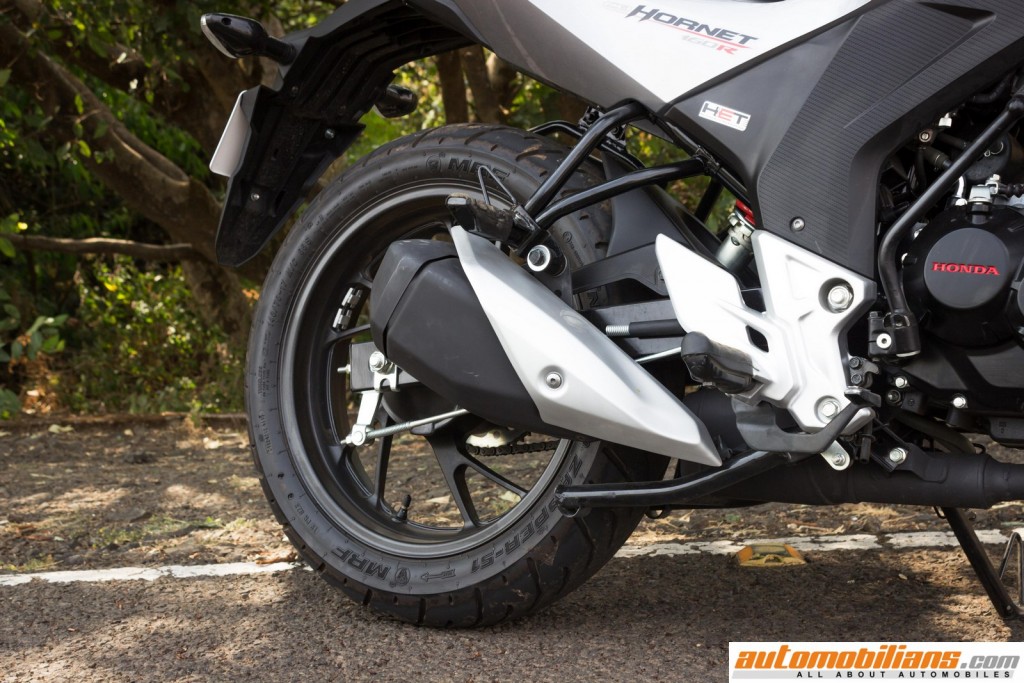