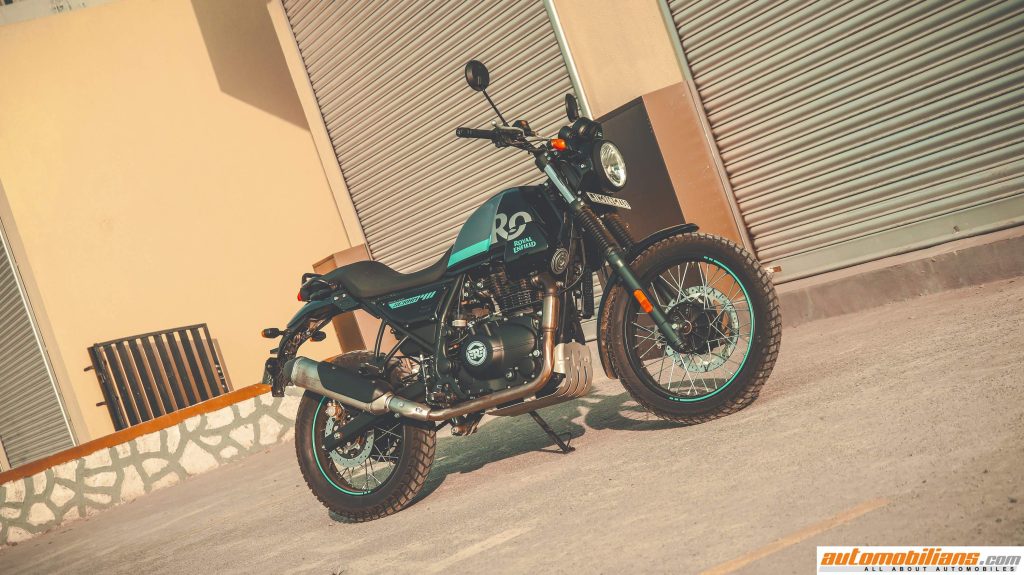 Royal Enfield, the oldest global motorcycle manufacturing company which has been in continuous production, has unveiled its first ADV crossover. The Classic 350 has been the reason behind the success story of bringing the company out of its mid-life crisis, but it was the Himalayan that proved to others that the company wasn’t just limited to making thumping cruisers. And now, a new variant of the Himalayan has been added to the line-up, called the Scram 411. But what is it, and how does it ride? Let’s find out, shall we?

Its Styling: The Scram 411 is a Himalayan in the form of a scrambler. It is easy to see how well designed the motorcycle is at first glance. The styling is on point and is not overdone at all. But, here’s what distinguishes the Scram 411 from the Himalayan, the front tall windscreen is removed, the beak is removed, and even the brackets on which the Himalayan’s headlight was mounted and on which you could also mount the jerry cans have been removed and are replaced by a small metal cowl that houses the retro round headlight and nicely chiselled panels on the side that houses the Royal Enfield badge. The Scram 411 doesn’t come with LED headlights as standard, just like the Himalayan. Other tweaks include the side panels (which are home to the Himalayan Scram 411 badging), a single-piece seat with lowered grab rails that houses the LED taillights, and a scrambler-like short fender that holds the indicators. Also, the front wheel size has shrunk down to a wider 19-inch spoke wheel from a 21-inch wheel on the Himalayan. Overall, the Scram 411 looks simple and elegant. 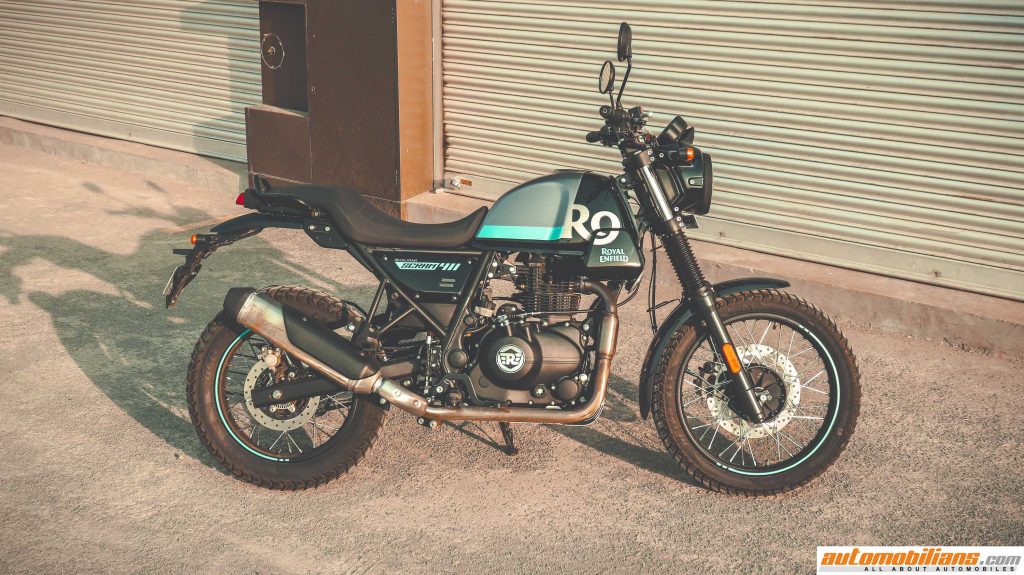 Its Switchgear and Instrument Cluster: The cockpit view of the rider is clean as the Scram 411 gets its instrument cluster from the Meteor 350. It is a single round multifunctional speedo that shows an odometer, two trip meters, a gear position indicator, digital fuel gauge and also a Trip F distance to empty meter. The Tripper Pod navigation unit which you see in the picture below is an optional accessory of the Make It Yours catalogue and isn’t offered on the top-end variant either. 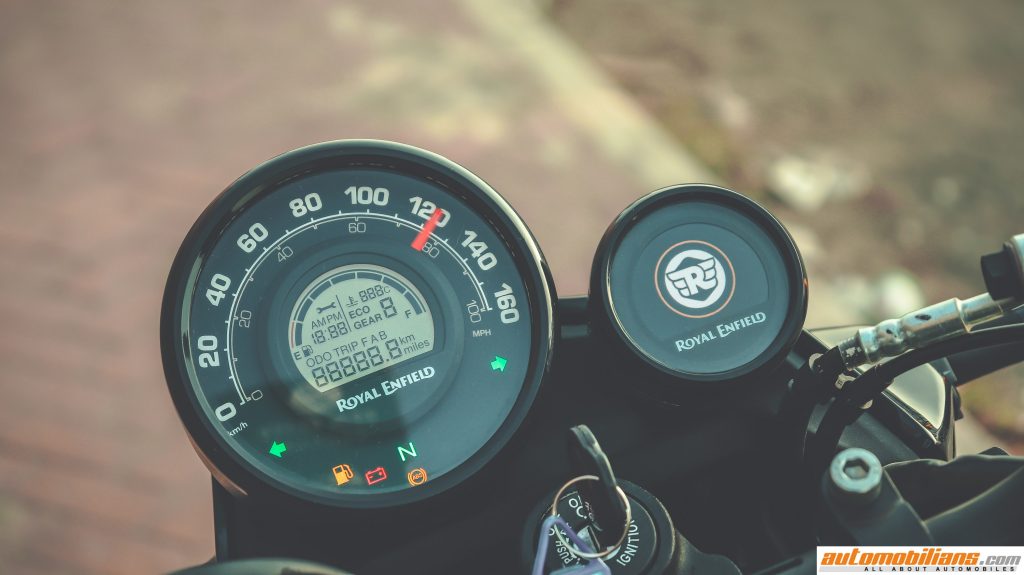 The switchgear is easy to reach, and the overall plastic quality is acceptable. The right one houses the kill switch, hazard indicator switch, starter switch and an information switch on the other side that lets you scroll through different speedometers. On the left, there is a high-low beam switch, indicator switch, horn button, and a pass-light switch. 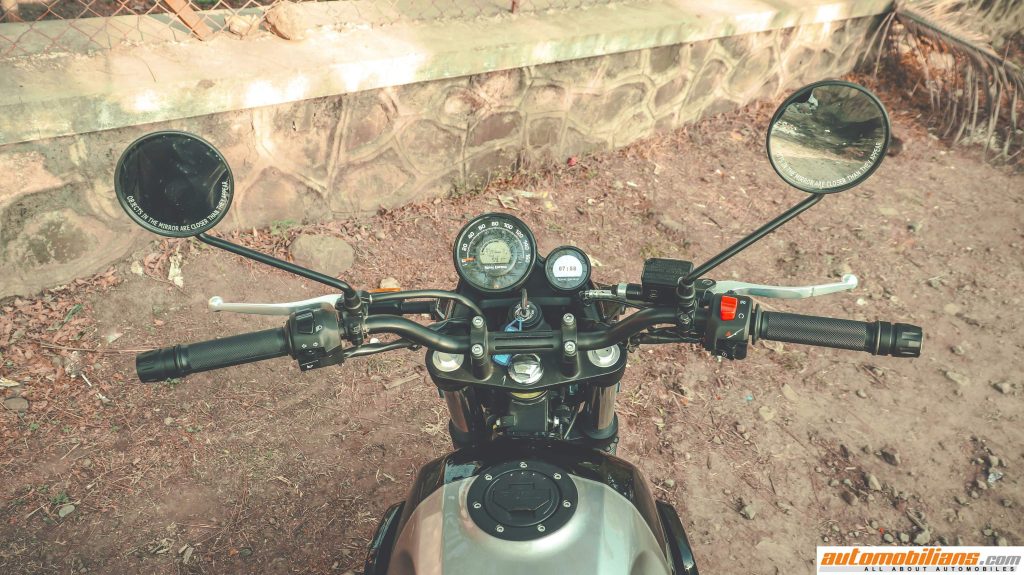 Its Engine and Riding Dynamics: The Scram 411 borrows its engine from the Himalayan and it is a long-stroke 411cc, air-cooled, fuel-injected, single-cylinder power mill. It churns out 24.3 BHP @ 6500 rpm and max torque of 32 Nm @ 4000 to 4500 rpm. This motor is mated to a 5-speed constant mesh gearbox. The exhaust note of this motorcycle is very similar to the Himalayan.

Once you astride the Scram 411 and press the engine start button, the bike will come to life with a smooth thumping exhaust note but at the same time, it will also remind you about its weight which is 183.5kg. It is lighter than the Himalayan by 6.5kg but if you will opt for the centre stand (which you should), the weight of the bike increases by 1.5kg. As said earlier, the front wheel has now gone down to a wider 19-inch and that has resulted in a slightly smaller wheelbase where the rear wheel stays to be the same 17-inch. Also, the saddle height has been reduced by 5mm more than the Himalayan. I rode the Scram 411 on the highway, in the city and also off-road. The motorcycle doesn’t feel quick off the line but the torque rushes in to get you going. The motorcycle felt quite planted even while doing three-digit speeds and the engine felt refined too. In the city, the Scram 411 doesn’t disappoint at all. Even with the tall gearing, it ran well in bumper-to-bumper traffic. And of course, if the first two gear ratios were shortened then it would have forced the rider to keep changing the gears frequently. The mid-range is where the bike feels at ease and performs well. My off-road session with the Scram 411 wasn’t disappointing either, the motorcycle did remind me of its weight but it would also disappear with a twist of the throttle. The handlebar has also been lowered down by 60mm and moved towards the rider by 20mm, and that has eventually resulted in easy manoeuvring of the motorcycle. The Scram 411 is built on the same Harris Performance chassis as that of the Himalayan, and the long-travel suspension does its job pretty well too. The bike is equipped with disc brakes at the front and the rear and also gets dual-channel ABS. The ABS is recalibrated because of the smaller front wheel but that doesn’t lower your confidence while braking. The ground clearance has also gone down by 20mm, but you can still fly over bumps and rough trails with ease. 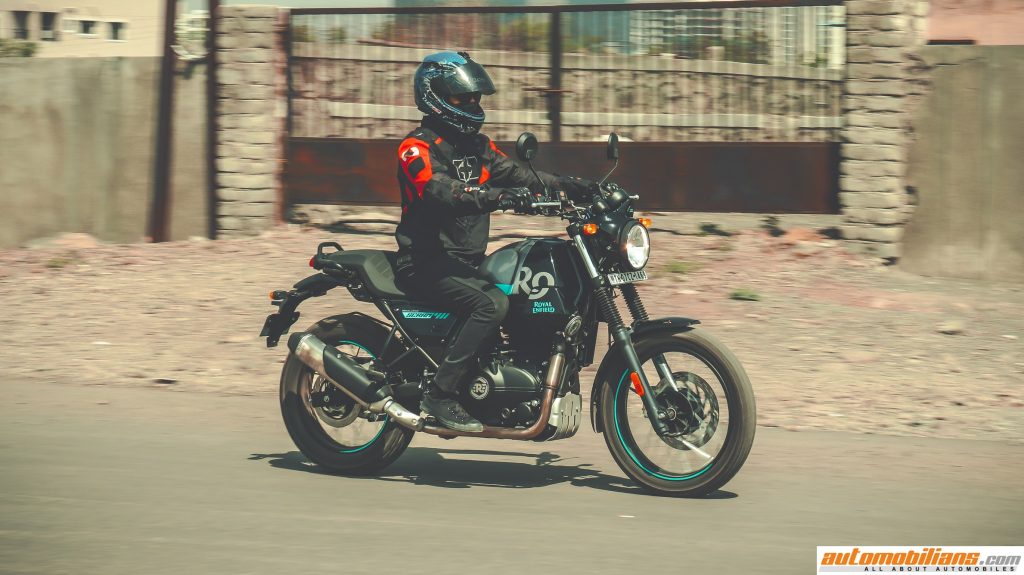 Its Verdict/Conclusion: Royal Enfield takes its customer feedback seriously and has answered customer requests for a multi-purpose motorcycle by introducing the Scram 411. This bike is offered in 7 colourways, out of which the Silver Spirit (our media test bike) is my favourite. The Scram 411 is a motorcycle for someone who is seeking a muscular bike that can be ridden easily. The Scram 411 is more urban-biased and can take on rough roads easily. Even with the tweaks, the rider’s triangle is sorted and comfortable for city and long rides. The brand has achieved what they were aiming for while building the Scram 411, an affordable, easily accessible and approachable version of the Himalayan. The styling is fresh but the overall ride experience feels the same as the Himalayan. But if you don’t want to own the Himalayan and also don’t want to compromise on a bike’s off-roading capabilities, then the Scram 411 is the bike for you. 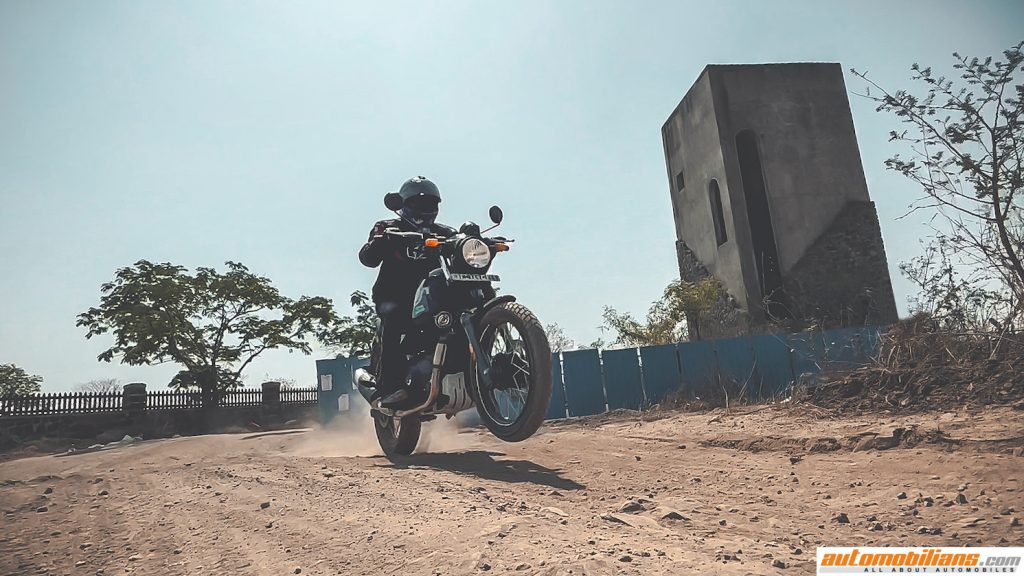 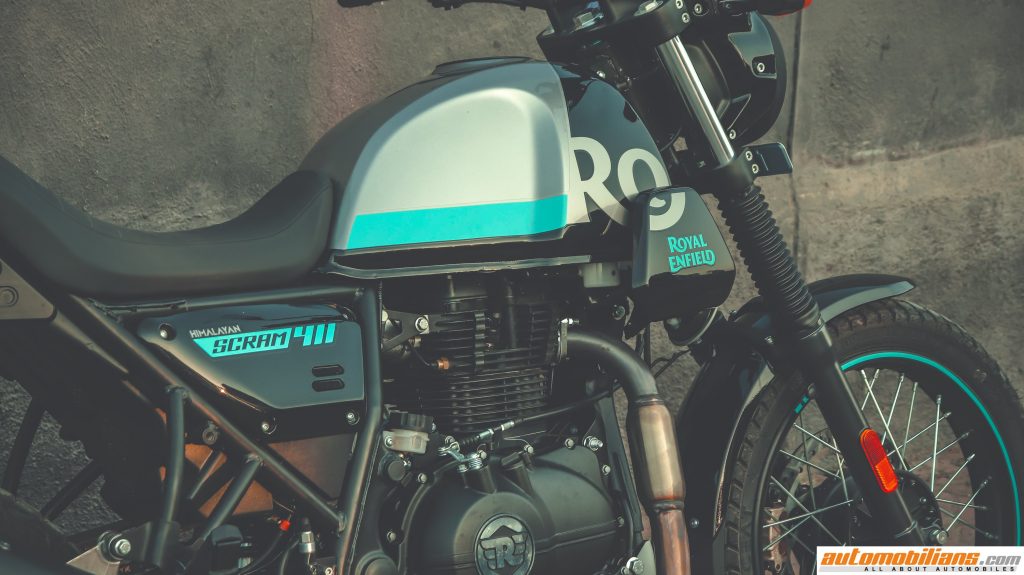 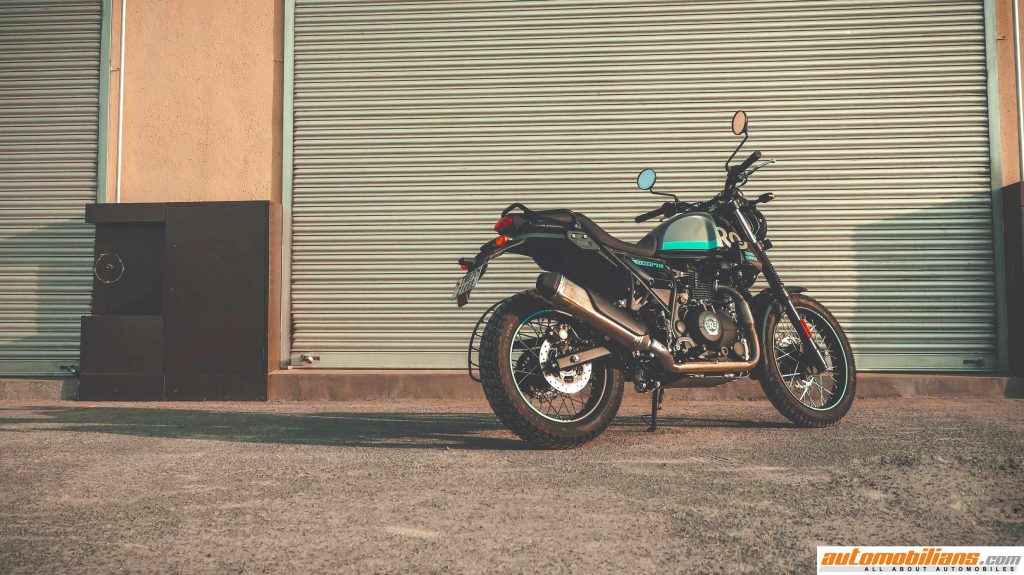