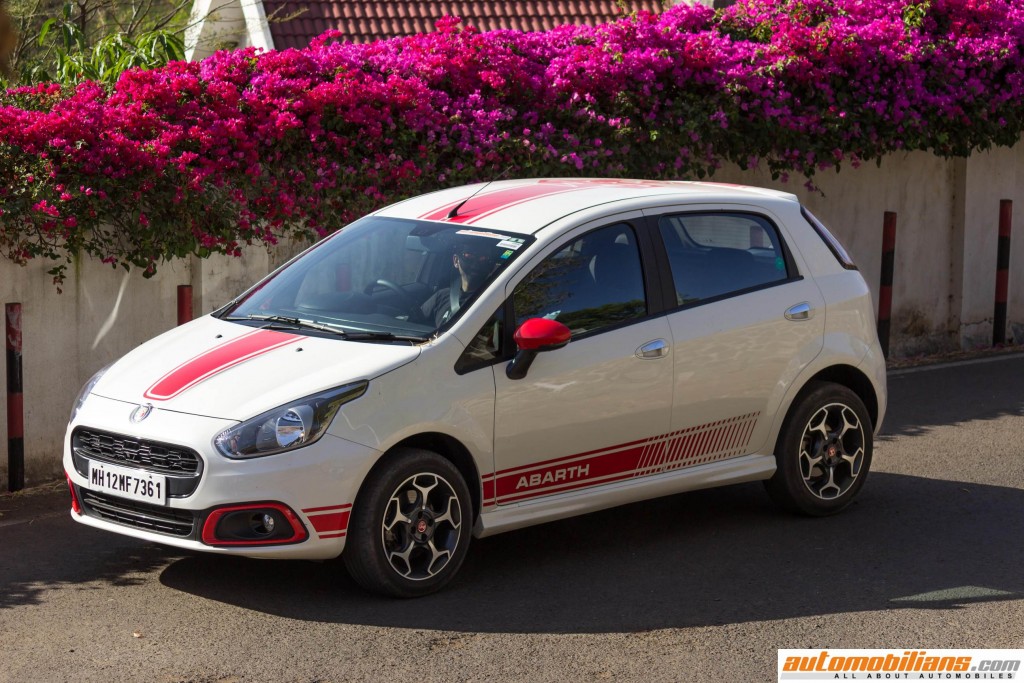 The Fiat Abarth Punto Evo, a performance car from the company was unveiled at the Auto Expo 2014 and now after two years, the company has launched it and calls it as the India’s hot hatch. The Fiat Abarth Punto Evo is based on the second generation of Fiat Punto, which was launched few years back in India. The Abarth Grande Punto, the first generation Punto was the first Punto to get the Abarth badging internationally in 2007. It was powered with the same 1.4L, 145 BHP turbo petrol mill which is currently offered on the Indian variant now. Later on in 2010, it was updated with a more powerful 1.4L, 163 BHP MultiAir turbo petrol engine but it didn’t do well in the international markets and so because of its poor sales it was discontinued from the international markets.

Exterior Design: The Abarth Punto being based on the second generation on the Fiat Punto carries the same design cues with minor cosmetic makeover. The cosmetic changes include new paint scheme, an Abarth logo at front and rear instead of the Fiat logo. There are also red colored racing stripes vinyl stickers on the car with a Scorpion decal on the roof and a red Abarth stickering on the doors and vinyl coloured ORVMs. The fog lamps up front and at the rear get the red color treatment around them. The Abarth Punto also comes equipped with Scorpion claw design alloy wheels. Ride height (ground clearance) has been lowered from 185 mm to 155 mm for its better performance. Nonetheless, the Abarth Punto looks sporty, dynamic and full of energy and also attracts many eyeballs and we did get many appreciations over the car’s looks from many people around the town. 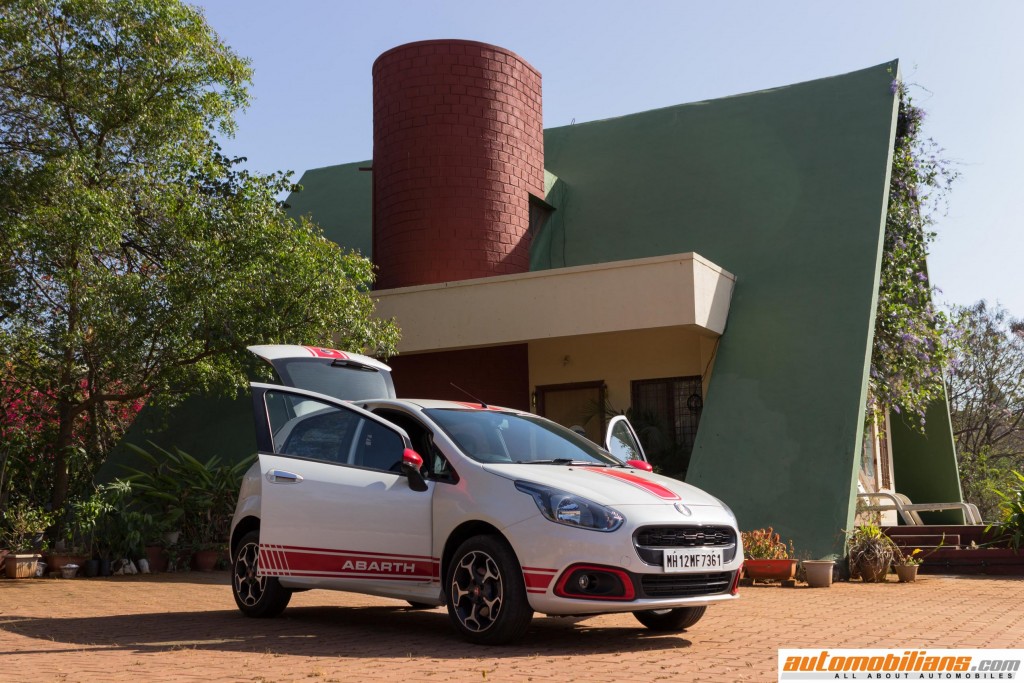 Interior Design: Step into the car and you will notice the all-black sporty interiors. The seats, the steering wheel and all other interior elements are in black. The steering wheel gets the Abarth logo instead of the Fiat logo. The instrument cluster remains to be the same expect for the Abarth’s logo in there. There are chrome inserts and linings wherever necessary and the seats and the gear lever get the red and yellow stitching treatment. There are Abarth door sills and the regular black pedals are now replaced with shiny aluminium Abarth pedals. Rest everything on the inside of the car remains to be similar to the Fiat Punto Evo. Comfort inside the cabin is very decent. Headroom and legroom is decent along with 280 liters of boot space behind. Rear AC vents help to keep the air circulation and atmosphere at the back in control. So, the sporty black interiors of the Abarth Punto makes it the driver’s car to be in. 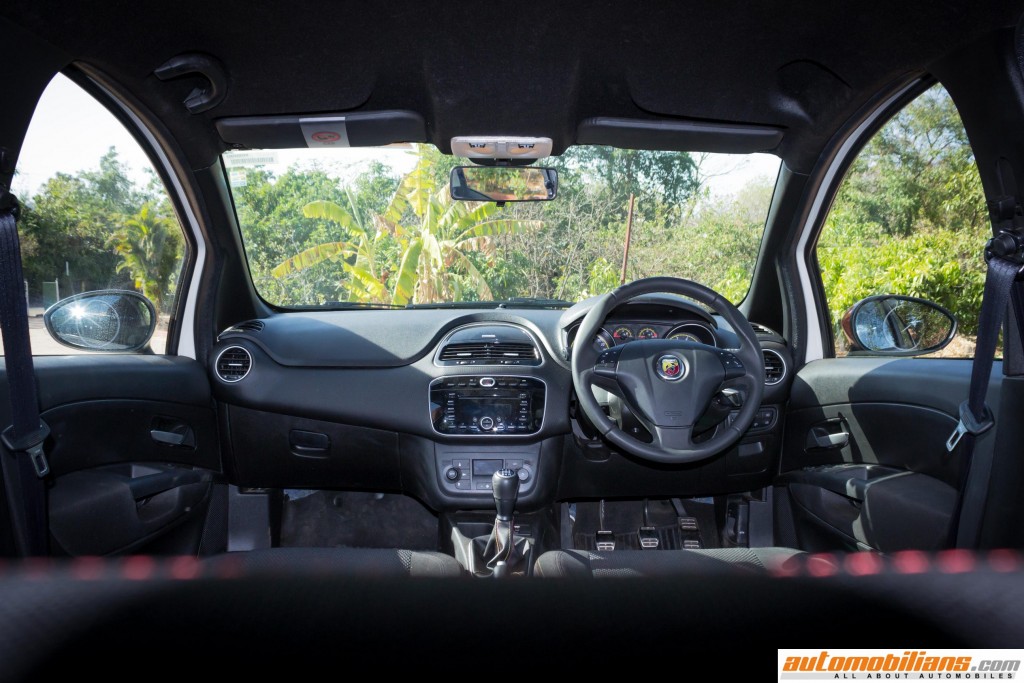 Engine & Performance: Under the hood of the Abarth Punto lies the real charm. It gets a 1.4L T-Jet, inline 4-cylinder, 1368 cc turbo petrol engine. It is finely tuned to produce a thumping 145 BHP @ 5500 rpm of power and 212 Nm @ 2000-4000 rpm of torque. All of this is coupled with a 5-speed manual transmission gearbox that powers the front wheels of this car. The engine is also integrated with a multi-point fuel injection system for ideal and better power output and performance. 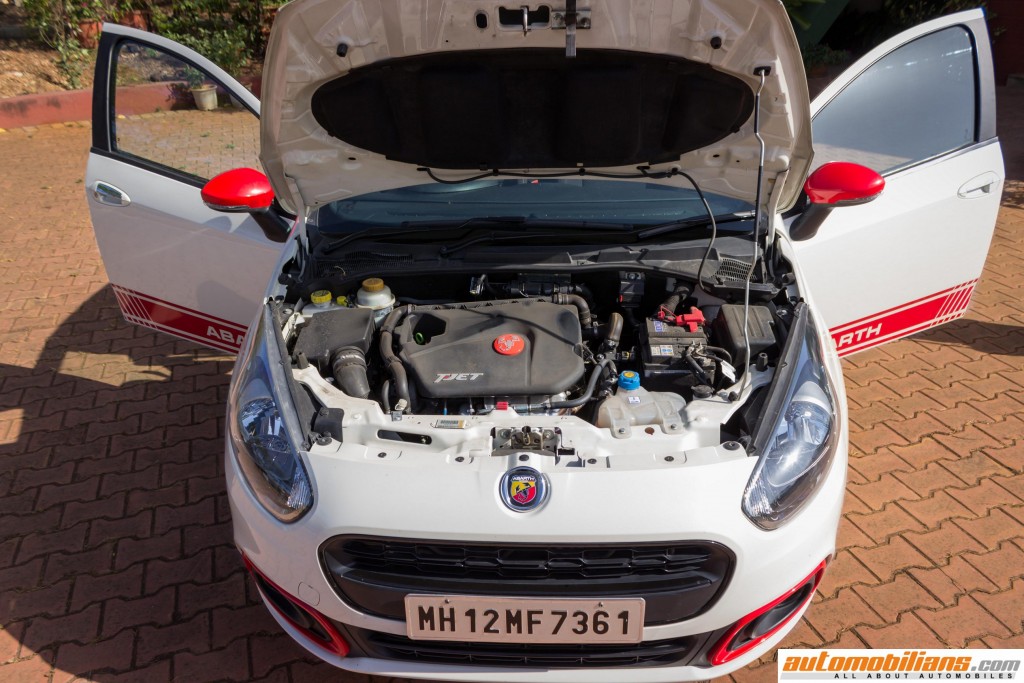 The car is lowered to deliver better performance. It is equipped with disc brakes on all its wheels for getting this powerful car to a perfect stop and to keep it in control. The ABS is linked perfectly with all the discs and the suspensions are stiffened for a sportier ride quality. Turbo lag can be felt under 2000 rpm but then accelerate the car and it just pushes you back in the seat and has a flat torque curve between 2000 and 4000 rpm. The car revs quickly and those 212 Nm of torque helps the car to keep going with a powerful pace. The 145 BHP which comes into picture at 5500 rpm takes care of everything then and top-end rev range is just what the car loves to keep going at. The manual gearbox is the perfect mesh for such a powerful car and it also controls the car pretty well. The gear-change action is rather notchy so do take care that you don’t end up shifting the gear in a wrong one. The claimed fuel efficiency is of 16.3 km/l but we couldn’t extract more than 12 km/l. But, whatsoever, the power figures do help the car in achieving the 0-100 km/h sprint in 8.8 seconds and a top speed of 190 km/h. 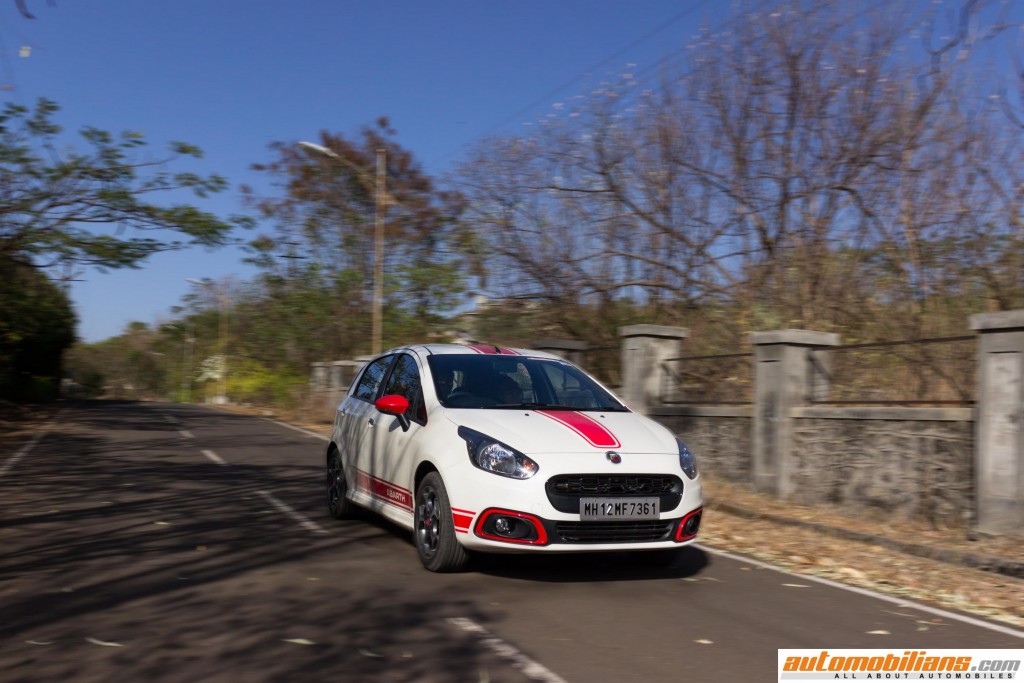 Driving Dynamics: Fiat has lowered the ride height of this Abarth Punto for better driving dynamics. It thus has a sharp handling and better high speed stability. The car is aggressive and as you throw it into a corner, it keeps going very well and keeps a clear line. It remains stable all the time. The stiffened suspension setup helps this car to keep on going seamlessly. Th car is quick off the line and its body roll is kept under proper check and infact it gives you the confidence of pushing this car to its limits. The hydraulic steering wheel feels a bit heavier but it gives the best feedback. The Apollo tyres do have a decent grip. The wide section tyres and suspensions soak up bumps and potholes very well. The lowered ground clearance doesn’t scrape the car’s underbelly anywhere. Everything is meshed up very well. The Abarth Punto is a great tarmac oriented performance car and keeps you confident in every way. Practically and Performance is seen at the same time in its driving dynamics. 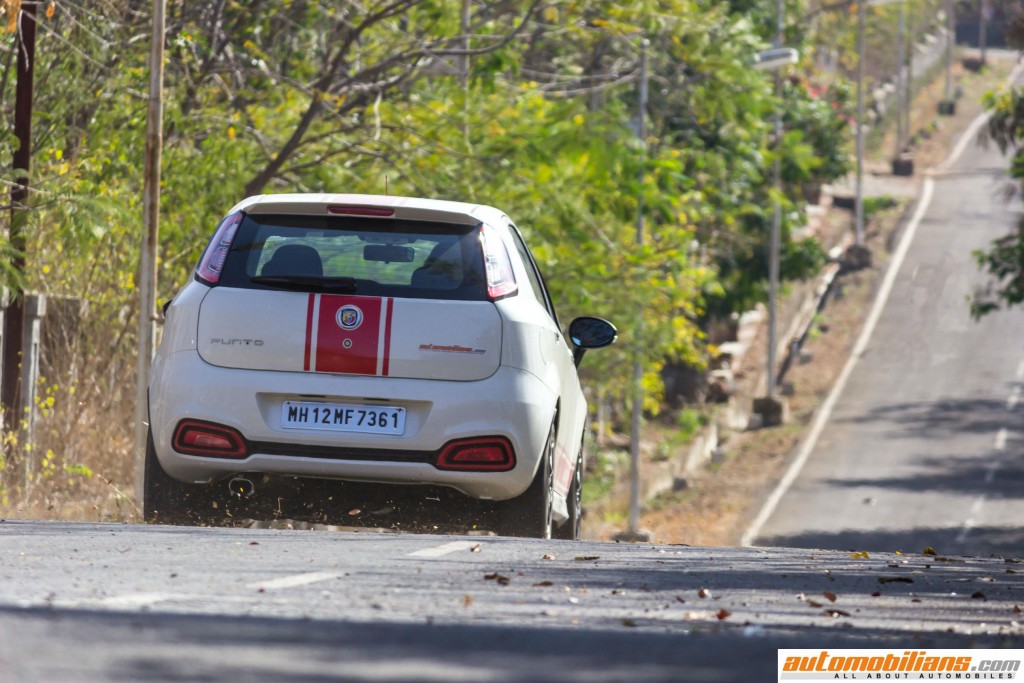 Safety & After Sales Service: Fiat is offering the Abarth Punto in only one variant and so ABS, EBD, dual front airbags, seatbelt pretensioner, fire prevention system, early crash sensors, engine immobilizer come as standard in this car. The car also has a strong build quality and stronger shell for your safety. The company has over 120 service centers and offers 3 years/1,00,000 kms of warranty as standard on this car which you can optionally extend it for another 2 years/upto 1,50,000 kms. 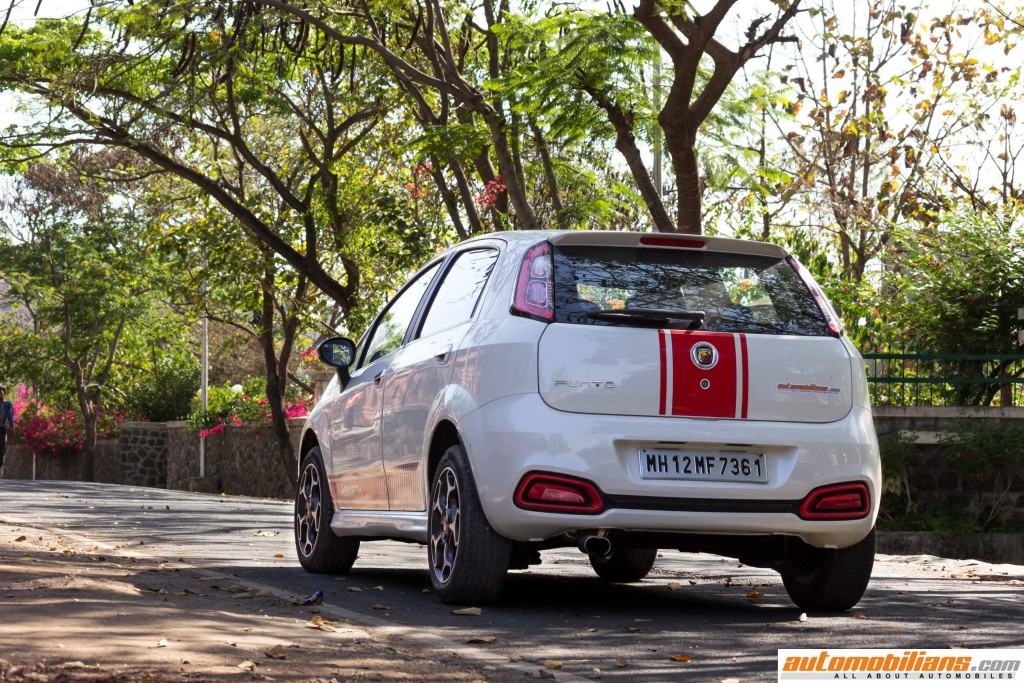 Verdict/Conclusion: The Abarth Punto is so powerful that it proves out to be the real hot hatch and those mind-boggling performance figures of the T-Jet engine are just so amazing in real too. The car does miss out on things like reverse parking sensors, touchscreen infotainment system and a few others. But the company manufactures this car locally and so it costs less. At the end of the day, it’s an Abarth, a 145 BHP hot hatchback made for driving enthusiasts. Practicality, comfort and performance are offered at the same time in this car by the company. It looks great, sporty and it is also attractive at the same time. It is a perfect car and worth the buy. It makes you grin when you are behind its wheel because of its driving dynamics but do remember, with power comes responsibility so, do Drive safe! 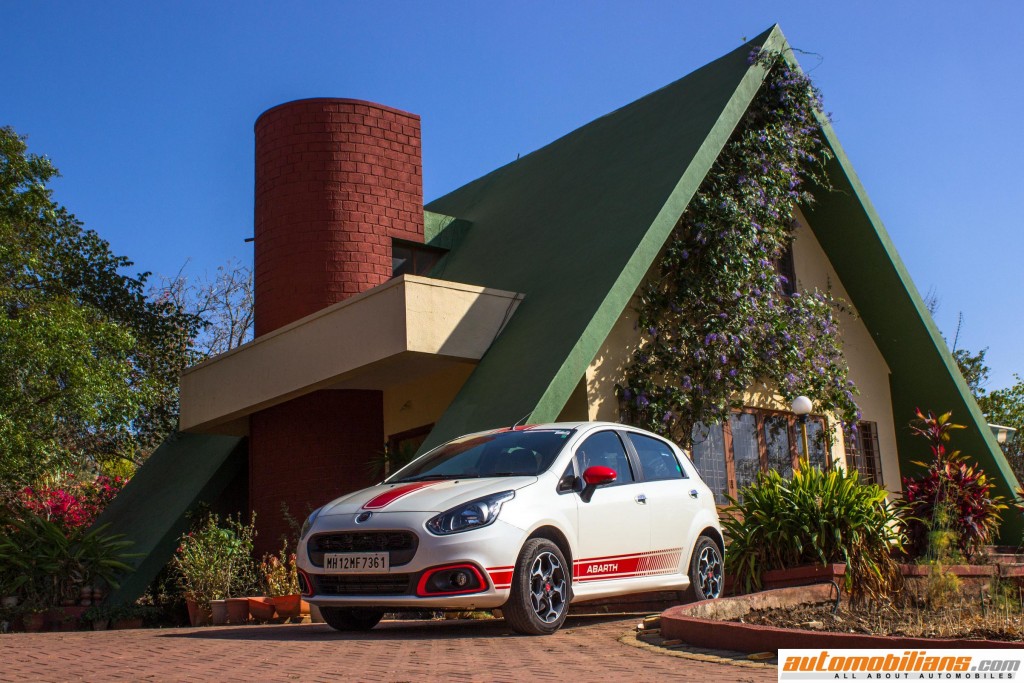 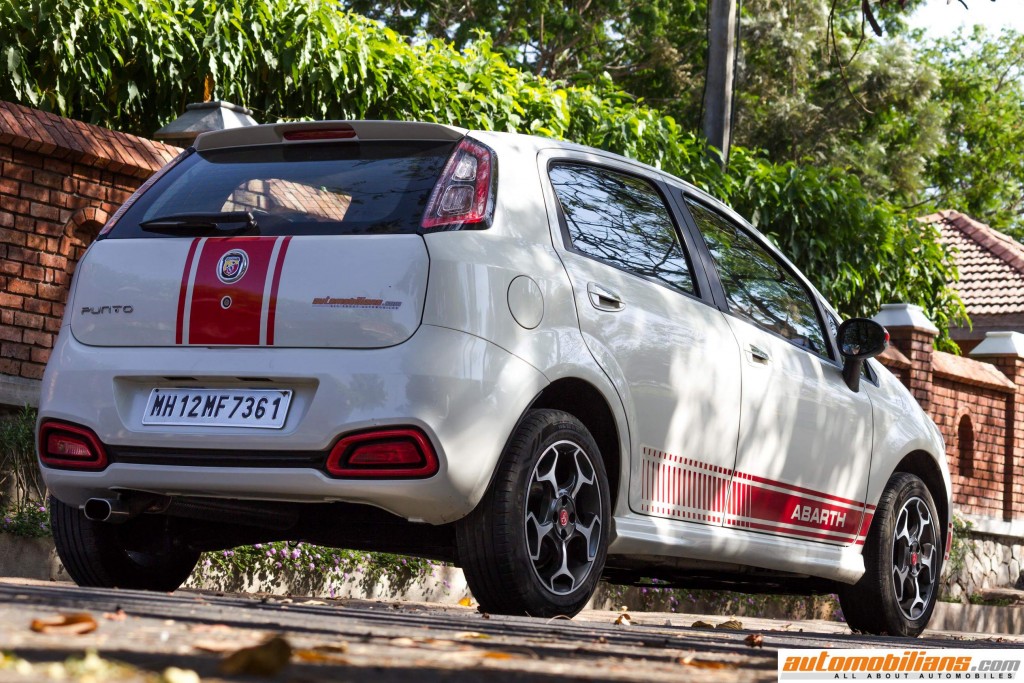